The Ire is a group of exceptionally cosmere-aware Elantrian worldhoppers from Sel who have constructed a fortress in the Cognitive Realm between worlds.[1][2] Aon Ire, presumably their namesake, means age or time.[3]

The group seems to have a hierarchy, with the Ire proper consisting of extremely ancient Elantrians, both male and female. They are incredibly wizened and mostly or completely bald, and are not immediately recognizable as human. They have the silvery skin of Elantrians and glow slightly; a few members have darker skin, presumably indicating that they are ethnically Dula. The Ire wear hooded white robes with silver embroidery. Alonoe, who seems to have a leadership role in the group, has thicker bands of silver on her robes.[4]

The Ire live in the Cognitive Realm and maintain a fortress at the edge of the Scadrian subastral. They are accompanied by a large complement of guards, led by a captain. The guards wear white-blue tabards and carry pikes. They do not have the ancient appearance of the Ire, nor are they Elantrians. However, they have fair skin and speak the same language as the Ire, implying that they are also of Aonic heritage.[4]

The Ire have other members, not all of whom are ancient.[5] In addition to their fortress, they have other small outposts in the Cognitive Realm,[2] and some of their members presumably operate or visit these locations. They continue to add new members to their group.[6] 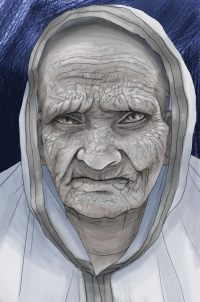 The Elantrian members of the Ire are not able to use AonDor in their fortress due to the location-dependent nature of Selish magic.[7][8] However, the fortress has a thick, brightly glowing conduit that leads into the distance; Kelsier is able to sense that this conduit connects to a source of power on their planet, presumably the Dor.[4] The conduit seems to provide the power that the Ire need to fuel their Elantrian physiology,[9] as they appear to absorb the glowing light directly from the walls of the fortress.[4] Preservation describes them as those that "died, but did not", and classifies them differently than Cognitive Shadows like Kelsier.[10] Their residence in the Cognitive Realm also affects the way that they age.[11] All of the members are worldhoppers, and based on the number of guards in the fortress, they seem to be able to bring other people into the Cognitive Realm.[4] A female member of the Ire has the ability to place wards on magical objects to conceal them from detection by a Shard.[12][13]

As a group, the Ire are highly cosmere-aware and use terms like Fortune, Connection, Realmatic Theory, Cognitive Shadow, and Adonalsium.[4] They were aware that there was something happening to Devotion's Perpendicularity before the Reod occurred;[14] they were not on Sel during the Reod, but it affected them in some way.[15] They have some knowledge of manifestations of Investiture on other planets in the cosmere, although they do not always know all the details.[16] Their outposts on other planets and subastrals may contribute to this knowledge.[2][17] Ruin,[18] Preservation,[10] and Harmony[2] were all aware of their fortress. Cosmere scholars Khriss and Nazh indicate that the Ire's knowledge far surpasses their own.[19] The Ire communicate with other cosmere scholars and worldhoppers in Silverlight, although they are fairly isolationist. Khriss believes that they may be hiding secrets about Sel and have denied her repeated requests for collaboration.[20]

The Ire's fortress is located in the Cognitive Realm at the very edge of the subastral of Scadrial, near the space between planets.[21][22] The corresponding location in the Physical Realm is somewhere in the ocean beyond the Farmost Dominance in the northwest of the Final Empire.[19] It is made of white stones—actually the souls of stones—that glow with a faint, constant blue light.[4] The conduit that connects the fortress to the Dor provides the power needed for the fortress to have permanence in the Cognitive Realm, as the power can be seen coursing through the entire building.[4] It is beautiful and somehow inviting; it is the Ire's most well-constructed facility,[2] and is nearly as large a city.[4][10] It has numerous windows, with some being narrow, like an arrow slit. The interior of the fortress has stone corridors and multiple large chambers. It also has living quarters for its residents, including bedrooms. Guards keep watch from the roof of the fortress looking for Cognitive Shadows, particularly those from Threnody.[4] Horses are also kept in the fortress.[12]

The Ire are in possession of several extremely powerful magical artifacts. They have a device the size of a desk clock that consists of a large yellow gemstone set in a lattice of golden metal.[4] The device, which shares several characteristics with Rosharan warning fabrials, is able to detect the presence of Threnodite shades within a day's march of the fortress.[4]

The group also designed (and likely created) a magical orb that was filled with a pure, brightly glowing liquid that could grant Connection.[4][12][23] The orb was technically created using a known magic system,[24] although it was used in a novel way.[25][26] Despite their extensive planning, the Ire may not have been fully prepared for the effects of using the orb.[27]

They also drink a glowing liquid that has a similar appearance to the substance in the orb.[4] Drinking the liquid restores the luminous aura that emanates from the members of the Ire.[12] The specific nature of the liquid is unknown, but it has some relation to a glowing substance made of Investiture[28] that Hoid is seen applying to his oar when he is rowing through the Cognitive Realm.[29][30]

A member of the organization named Riino is also in possession of an orb of glowing light. This orb is very similar to the Connection orb, although the light may be more "milky".[31] Riino calls himself a "fortune seer" and says he can see the future,[31] implying that his orb may contain distilled Fortune. Kaladin is able to briefly experience visions when he touches the globe, and Riino tells him that this only happens for Invested people.[31]

When Shallan infiltrates the honorspren's vault in Lasting Integrity, she finds a large construction, similar to a vat or a jar, used for storing Stormlight though the honorspren don't know exactly how it works; they do know similar devices could be purchased from a group of traveling merchants known as the "Eyree," however.[32]

Little is known about the origin of the Ire, except that the organization and some of its members are incredibly old.[33] The group predates the Reod since they were not on Sel when it occurred,[15] but it seems likely that it was formed long before that time.

Riino was an Elantrian who had become Hoed after the Reod on Sel. He was able to direct Raoden and Galladon to place him into Devotion's Perpendicularity, and his body seemed to dissolve.[34] He somehow survived the dangerous conditions in Sel's Cognitive Realm[35] and became a member of the Ire.[6]

Alonoe and Elrao implied that the Ire worked on a strategy to take over the power of the Shard Preservation's power for quite some time.[4] Their specific motivation for wanting to take up the power of a Shard is unclear. They actively monitored the failing health of Preservation's Vessel, Leras, because they knew that his death would be their window to act.[4] The Connection orb was critical to their scheme,[12] although they did consider other uses for the orb before settling on their plan.[36]

by Isaac Stewart
A steel alphabet-style symbol for "Ire".

After being killed by the Lord Ruler and becoming a Cognitive Shadow, Kelsier met a dying Leras. Kelsier was desperate to find a way to stop Ruin, and Leras led him to Khriss and Nazh, who were shocked to see him. They told him that they could not help him, but that he should seek the Ire due to their exceptional knowledge about the cosmere.[19] Leras confirmed that the Ire had a city in the Cognitive Realm, and Kelsier set out to find and investigate it.[4]

Kelsier eventually found the fortress and attempted to infiltrate it. Kelsier was able to discern that the fortress was built with stone from another planet and sustained by an unfamiliar power; he was also inherently able to speak and read the Aonic language. A guard named Maod spotted him, and he and his captain reported the incident to Alonoe. Alonoe and the Ire were wary of intrusions by shades from Threnody, and assumed that Kelsier was one of them. She instructed the guard captain to turn on a special fabrial-like device, hoping to detect any Threnodites nearby. Although the device did not detect Kelsier since he was Scadrian, she told the guards and the rest of the Ire that they need to stay alert.[4]

Kelsier then observed a meeting of the Ire and overheard their plan to seize the power of Preservation. Elrao expressed concern about angering Ruin, but Alonoe refused to let fear deter the plan. Kelsier was irritated by Alonoe's ambition, partly because he had befriended Leras (whom he called "Fuzz"). He discovered the key to the Ire's plan, a magical orb that could provide the Connection necessary for someone to ascend as Preservation.[4] They planned to use wards to prevent Ruin from noticing the device.[12] Kelsier decided to thwart the Ire by stealing the orb.[4]

About a week later, five members of the Ire and fifteen guards left the fortress on horseback, intending to take control of Preservation. They brought a glowing liquid that seemed to sustain their magical Elantrian aura. Although four of the Ire members carried decoy orbs, Kelsier correctly guessed that Alonoe would not allow the real orb to leave her possession. He began to sow seeds of chaos, pretending to be Ruin and whispering disturbing things into Alonoe's ears. Alonoe was determined to persevere, but Kelsier's antics prevented the group from sleeping, leading to confusion and infighting. When the expedition approached a jungle, Kelsier seized the opportunity to scare the group's horses and isolate Alonoe amidst the vegetation. Using one of Alonoe's robes that he had stolen from the fortress, he tricked the rest of the group into thinking that she had disintegrated, scaring them away. He then doubled back to confront a terrified Alonoe, who believed that he was Ruin and gave up the orb. Alonoe even offered to serve Ruin, but Kelsier dismissed her, forcing her to walk to find her companions.[12] Kelsier went on to successfully use the orb as the Ire had intended.[23][25]

Some time after joining the Ire, Riino was seen in Shadesmar on Roshar working as a lighthouse keeper.[31] He was there for a specific purpose, although it was not related to the overall mission of the Ire.[17] He was in possession of a magical orb that allowed him to see the future; he called himself the "Rii Oracle." Kaladin met Riino and the orb seemed to transfix him; he touched it and experienced visions. Riino first assumed that Kaladin had BioChromatic Breath since only Invested people could use the orb, but was then shocked when he realized that Surgebinding had returned on Roshar.[31]

A group of traveling merchants, called the Eyree by Rosharans, sold the honorspren of Lasting Integrity Elantrian technology which can contain Stormlight.[32]

This article is still missing information. Please help The Coppermind by expanding it.
Retrieved from "https://coppermind.net/wiki/Ire?&oldid=164985"
Categories: