The Elantrians are a race of incredible grace and beauty that reside in the city of Elantris. People of any age, who are of Aonic descent, and who reside in or near the border of Arelon or Teod, are occasionally taken by the Shaod, which changes them into Elantrians. This consists of physical and mental alterations, and gives the capacity to use AonDor.

A person can become an Elantrian by being taken by the Shaod. The Shaod, or the Transformation, generally happens at night.[1] The people it chooses are seemingly random (though not completely)[2] and may be from any age or class in society.[3] The Shaod only takes people from Arelon or Teod, and occasionally Duladel.[4] It is suspected that this is due to AonDor's close Connection with Arelon and its geography in general.[5] A person needs to have some genetic ties to Arelon and be in Arelon to be taken by the Shaod.[6] Immediate proximity to Elantris or Elantrians do not increase one's chances of being taken by the Shaod.[7] A non-human could become an Elantrian.[8]

There is an upper limit to the number of Elantrians there can be at a given time.[9] There are ways to reverse the Shaod.[10][11] 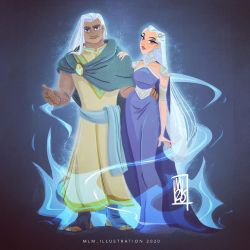 by Maria Lia Malandrino
Elantrians before the Reod

Elantrians have "brilliant white" hair and "metallic silver" skin and appear to shine with an inner light.[3] Elantrian bodies are fueled and constantly renewed by the Dor,[4] and if the Dor is blocked they quickly deteriorate. Elantrians heal quickly and can survive fatal injuries, such as decapitation.[12] They bleed silvery-white blood.[13] They are practically immortal, but being an Elantrian is emotionally and mentally exhausting and is one of the hardest forms of immortality that exist in the cosmere.[14] They have superior strength and speed.[3] Elantrians can still die of natural causes if left untreated.[15]

An Elantrian away from Sel would still be an Elantrian but many of the visible signs would fade away.[16]

Elantrians have access to AonDor, a symbol-based magic that can be used in seemingly limitless ways.[17] By drawing specific symbols, usually in the air, Elantrians are capable of instantaneous travel, healing, turning garbage to food, creating light, creating fire, creating a telescope made of air, creating disguises, etc.

An Elantrians' magic power will diminish the further they travel from the city of Elantris.[9]

With enough preparation, Elantrians can do things that are more impressive than Feruchemy.[18] 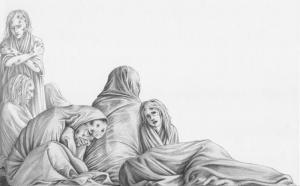 by LittleGreyDragon
Elantrians suffering during the Reod

The Reod has many effects (mostly bad ones) on Elantrians, possibly because of the dysfunction of the massive Aon Rao of Elantris city.

Their silvery skin turns grey and is covered in dark splotches and their white hair falls out, along with other less readily apparent changes, such as their hearts ceasing to beat, breathing and eating are no longer needed, bleeding no longer happens, and their wounds refusing to heal.[19] Some functions of the body like muscles and blood flow continue,[20] and sleep and brain functions continues to work very similarly to the way it did before.[21] Although unable to heal, a Reod Elantrian can only be killed by decapitation or burning, while hunger or most fatal wounds will fail to kill them since the Dor will keep their bodies functioning. Other attempts to kill them will build up pain that never decreases, and can finally result in making them a Hoed, leaving them filled with pain and unable to do anything other than moan. They burn much easier compared to a normal human.[22] These effects are due to the transformation being incomplete, waiting to finish but unable to do so with an incomplete Aon.[23] Reod Elantrian bodies act as if they are frozen at a certain point in time, which is why pain doesn't go away and things like hair do not grow.[15]

A Reod Elantrian has limited access to AonDor and cannot produce very powerful effects with it.[23] There is a similar relationship between a Reod Elantrian and a dead spren.[24][25] A Reod Elantrian can be affected by emotional Allomancy[26] and it is easier to pull metal out of them compared to a normal human.[27]

Some potential advantages come from being a Reod Elantrian. Reod Elantrains do not need to breathe or eat,[28] and they cannot be directly targeted by AonDor.[23] A Shardblade will register them as half alive, half dead. They would be a flicker and depending on when they are hit the Shardblade might cut a body part off or it might leave it dead.[29] A Reod Elantrain can still be detected by life sense but they would appear as a stutter, with a flashing sensation.[30]

The Ire are a group of Elantrian Worldhoppers who have established a fortress in the Cognitive Realm near Scadrial's subastral.

This article is still missing information. Please help The Coppermind by expanding it.
Retrieved from "https://coppermind.net/wiki/Elantrian?&oldid=167122"
Categories: