“The problem with being clever is that everyone assumes you’re always planning something. ”

Sarene is the daughter of King Eventeo of Teod[2], and Queen of Arelon. She has one brother, who is the heir to the Teo throne.[3] 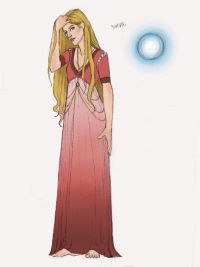 Sarene, princess of Teod and queen of Arelon, is politically-minded, bold, and strategic. She is described as a tall and thin woman with fair hair and silver-grey eyes.[4]. She is a natural leader, as evidenced by her immediate take over of Raoden's revolutionary group, despite strong personalities such as Roial and Ahan.[5] She is never satisfied with an unsolved mystery and can detect quite well when she is being lied to.

She is also known for being brusque, occasionally sarcastic, and patronizing to those who underestimate or try to manipulate her. This is shown by how she acts dimwitted in order to manipulate King Iadon[6], using his sexist views against him.

She seeks to better the lives of others, man or woman, rich or poor.

Sarene is a political genius and charismatic leader. She is good at reading people and manipulating them to her needs. Sarene is a very skilled fencer. She was able to briefly hold her own against Dilaf, though only with the advantage of a surprise attack. [7] 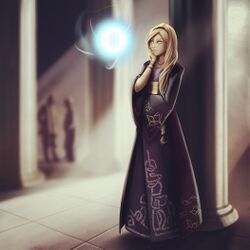 by Séverine Dumagny
With Ashe

Sarene became an ambassador for Teod at a very young age, serving most notably as the ambassador to Svorden.

In an attempt to re-establish diplomatic relations with Arelon, Sarene arranged a political marriage with Prince Raoden. She met and got to know Raoden by communicating through letters, and later by seon. When she arrived in Arelon, however, she found out that Raoden had died of "disease". A clause in the marriage contract stated that the death of either her or Raoden qualified as a marriage, so she found herself a widow, and legally the daughter of King Iadon of Arelon.[2]

She spent the first three months of her "married" life working to block the efforts of a gyorn named Hrathen to convert the people to Shu-Dereth and thus add both Teod and Arelon to the massive Fjordell Empire. In addition, she worked with Raoden's group of friends to attempt to change Iadon's system of government. She also brought food to the Elantrians, where she met Raoden under the name Spirit, and taught a group of Arelene noblewomen, including Eshen and Daora, fencing in an attempt to give them some agency in the court.[8]

Hrathen eventually got to Telrii, a rich nobleman, and promised to place him on the throne if he converted to Shu-Dereth. When Iadon committed suicide, Sarene realized that the only way to keep Telrii off the throne was to combine her fortunes with Roial's through marriage.[9] On the day of the wedding, however, Hrathen poisoned her to make her look like she had undergone transformation by the Shaod, and she was thrown into Elantris.[10] During her time in Elantris, she studied AonDor with Raoden. Together they discovered that AonDor was tied to the geography of Arelon. After five days in Elantris, when the poison wore off, she and Raoden realized that she was not truly an Elantrian, and she returned to Kae.[11] Shortly after Sarene left Elantris, Raoden managed to use AonDor by adding a line for the great chasm. [12]

Sarene met Raoden again, this time in his with AonDor created disguise as the Dula noble "Kaloo".[13] When King Telrii attacked, Raoden revealed his identity.[14] After Eondel killed Telrii, Raoden claimed the throne.[15]

She convinced the people to accept Raoden as their king even though he was an Elantrian,[16] but then the Derethi priests attacked Arelon, capturing Sarene along with the rest of her allies and family in Kae. She was taken to Teoras by Dilaf, where he attempted to use her to make King Eventeo surrender to the Derethi.[17] With the aid of Hrathen, Raoden, Galladon, and other Elantrians, she fought off the Derethi invasion and saved both Kae and Teod from Dilaf's attack.[7]

Afterward, she was married in a grand ceremony to Raoden, and became the Queen of Arelon.[18] She became pregnant by him afterward.

Raoden is Sarene's Husband. He gets taken by the Shaod after Sarene begins her voyage to Arelon, and is proclaimed dead. Later, Sarene meets him while delivering food to Elantris, but doesn’t recognize him, as he was going by the name Spirit. She meets him again, but he is disguised as a Dula named Kaloo. She suspects Kaloo to be hiding something, and he reveals himself to be Raoden to Sarene before he does it publicly after Roial’s death. When Sarene is teleported to Elantris, Raoden uses Aon Tia to teleport to Teod, rushing to save his wife from Dilaf. After the Dakhor monk’s invasion, Sarene becomes pregnant with Raoden’s child.[19]

Sarene sees Roial as a grandfatherly figure. She believes him to be wise and stern, and when she first meets him she feels desperate to gain his respect[5]

Sarene sees Eondel as a stately and respectful man [5], strong in both physical and mental strength, despite his growing age.

Sarene sees Shuden as a powerful ally because of his honesty [5]. She also believes him to be hypocritical in the way he avoids the women of the court’s attention because she believes he actually enjoys it.[3]

Ahan is fat, arrogant, and impetuous in Sarene’s opinion. She believes he never understands the gravity of the situation he is in, leading to Roial’s death.

Sarene sees Iadon as a quick-tempered, easily frustrated man. He sees Sarene as an expended resource, he just needed her for the treaty between Arelon and Teod. Sarene believes he greatly underestimates all women and uses this to her advantage.

Eventeo is Sarene’s father, always trying to make her happy. However, he didn’t understand how Sarene was often shunned and mocked until she enlightened him through seon[3]. Eventeo converted to Shu-Derith after promising Hrathren he would do so if Sarene was healed of her curse[20]

As a child, Sarene would call her uncle Kiin “Hunkey Kay” which is how she first addresses him after she meets him in Arelon[6]. He is a robust man, looking out for Sarene’s best interests. After moving to Arelon, he married Daora. Sarene questions him several times about why he left Teod, but he never gives a full answer. During the Derethi invasion, Kiin reveals himself as the pirate Dreaok Crushthroat.

Lukel is Kiin’s stepson and Sarene’s cousin. He is a successful merchant with his wife, Jalla, and is part of the group of nobles working to overthrow the king.

Kaise and Daorn are Kiin’s children and Sarene’s cousins. Sarene views them as intelligent, but still children.

Sarene believes that Hrathen is a bigger threat than the other nobles believe[21]. She thinks that he is finally someone in Arelon that she can match her wits against. She disrupts his plans many times before he poisons her and gets her thrown into Elantris. Despite this, he saves her and Raoden from Dilaf in Teod[7]. In response to this, Sarene demands that he be treated as a hero, even though he was of the same faith as the Dakhor monks[22]

This article is still missing information. Please help The Coppermind by expanding it.
Retrieved from "https://coppermind.net/wiki/Sarene?&oldid=176702"
Categories: