Duchess Khrissalla, better known as Khriss, is a female worldhopper originally from the country of Elis on the Darkside of Taldain. 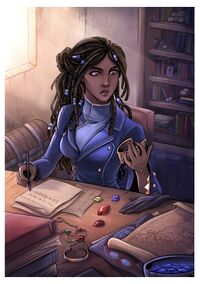 Khriss has brown skin, being from the Darkside of Taldain. She has brown eyes and wears her hair in braids. While on Dayside, Khriss wears a pair of dark, heavy sunglasses as she is unused to the sunlight of Dayside. She also wears a wide-brimmed hat to keep the sun's rays from her face. [1]

Khriss is a university-educated scholar and is extremely inquisitive. She seeks to understand and find scientific explanations for all that she can. She believes in freedom of information, and is willing to assist any who come to her for help if she perceives their intentions to be good.[2]

Khriss is one of the most accomplished scholars of magic in the cosmere. She knows more about the cosmere and its magic systems than Nazh, her assistant, and Hoid, who has been alive since before the Shattering.[3] She collects her knowledge in the Ars Arcana.[4] The most important question she wants answered is what happens in the Beyond, followed by how to get Stormlight off Roshar.[5] 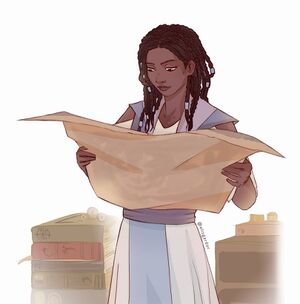 Khriss was engaged for a time to Gevalden--or Gevin, as he preferred in informal settings[6]--the Prince of Elis. Before their wedding, Gevalden traveled to Dayside in search of the mythical Sand Mages, where he disappeared and was presumed dead. Khriss, determined to seek out what her fiancé was trying to discover, traveled to Dayside with Baon, Cynder, and Jon Acron.[1] She met Kenton shortly after the Kerztian attack on the Sand Masters, and he agreed to be her guide to Kezare, where they parted ways.[7] There Khriss met Loaten, and attempted to get answers about Gevin to no avail.[6] She then sought the Taisha, assuming Gevin would have met them, but failed to get meetings with any of them before finally discovering Kenton was the Lord Mastrell.[8]

After recovering from her initial anger at his deception, Khriss eventually decided to help Kenton in his mission to preserve the Diem.[9] She continued to do so even following the news of her betrothed's supposed death [10] and attempted to research the mechanics of Sand Mastery.[11] Following the party at Lord Admiral's, she decided to try learning it herself, enlisting Kenton's help, but was ultimately unable to display any skill with Sand Mastery.[12]

Khriss eventually discovered that it was Baon that killed Captain Deral and his lieutenant, and that he was sent to Elis by the Dynasty.[13] Trying to find Baon before he left the city, she asked N'Teese to arrange a meeting with Nilto for her, to ask if he knew Baon's whereabouts.[12] During this meeting Nilto called her "Khriss", causing her to realize his identity as Gevin. She confronted him at the docks as he was attempting to leave the city when Jon Acron appeared and revealed himself as an assassin sent by the Dynasty to kill Gevalden. After running from Acron, Khriss used a crane to knock him into the harbor. She asked Gevin to return with her to Darkside, but he refused in favor of continuing to help people on Dayside.[14]

She traveled with Kenton to Lraezare to find the Lord Merchant, and they returned to Kezare once Kenton made his deal with him. Searching for the Lord General, Khriss was present when they discovered his body in the wine cellar.[15]

After the Diem was restored, Khriss returned to Darkside to test Sand Mastery there.[16]

At some point Khriss was involved in the founding of a university in Silverlight.[17]

“You've stumbled into something far, far bigger than you, your politics, or your little planet.”

Khriss and Nazh were discovered by Kelsier in the Cognitive Realm of Scadrial. The pair enlightened Kelsier on how the events on Scadrial were affecting the cosmere. They remained quite vague as to why they were there - although Khriss mentioned wanting to see what the death of a Shard looks like - or about other events elsewhere in the cosmere that were unrelated to the current conflict. Khriss refused his requests for help and they left abruptly after Kelsier told them of his meeting with Drifter.[18] Since then, she has worked with Thaidakar on research at least once.[19]

She later appeared at a party in New Seran in post-Catacendre Scadrial.[20] There she stole a dance with Waxillium Ladrian and asked him questions about his powers and how they related to physics. She was also mentioned in a broadsheet ad, telling people who hear talking tools to contact Khriss and Nazh.[21] 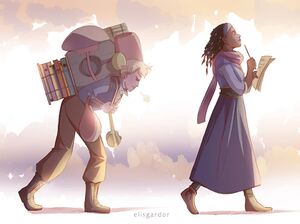 The mapmaker Nazh is in her employ.[22] She commonly sends him out to procure maps, documents and other illustrations for her, particularly in high-risk environments. Although the two argue fairly often, they are good friends and Nazh is fiercely loyal to her.[23]

Before she left Darkside for the first time, she was engaged to prince Gevalden of Elis. They appear to have been quite close, enough so that Khriss organized an expedition to find him on her own following his disappearance on Dayside.[1] After discovering his identity as Nilto, she asks him to return to Darkside with her. He refuses, saying he will not return after being injured, and that he and Khriss have both changed too much to have a relationship.[14]

This article is still missing information. Please help The Coppermind by expanding it.
Retrieved from "https://coppermind.net/wiki/Khrissalla?&oldid=168976"
Categories: