“[The Cognitive Realm] is the in-between step. After death and before ... the Beyond. The Somewhere Else. Where souls must go. ”

The Beyond is an unknown location that the people of the cosmere are drawn to after they die. Leras occasionally refers to the Beyond as the Somewhere Else.[1] The One teaches that the Beyond is the same as the Spiritual Realm, though most other philosophers would disagree.[2] 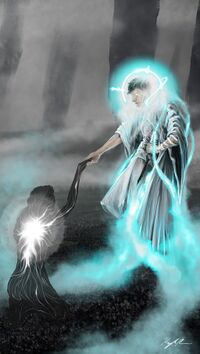 When a person dies, their mind is transported to the Cognitive Realm,[1] though they are not always visible to other people in the Cognitive Realm.[3] This includes near-sapient lifeforms like Ryshadium; less sapient lifeforms may also experience this process, though they would transition very quickly and that question is a matter of debate among philosophers.[4] For most people, this time in the Cognitive Realm is nothing more than an "in between" step, as their mind is soon pulled into the Beyond.[1] When they go to the Beyond, they appear to stretch toward an unseen, distant point that defies geometry that has also been described as "nothingness" and "eternity."[5][6][7] People on Scadrial appear to turn into white mist as they stretch.[1] Once someone transitions to the Beyond, their Investiture returns to the Shards and the cosmere at large.[8][9] The pull of the Beyond is part of why shadows point the wrong way in the Cognitive Realm.[10]

Before someone moves on to the Beyond, their Cognitive aspect can be returned to their physical body with the proper Investiture, both by use of an Invested Art[11][9][12][13] or by the act of a Shard.[14][15] It is also possible to escape the pull of the Beyond by entering a perpendicularity and becoming a Cognitive Shadow,[1][16][17] though this method does not restore a person's ties to the Physical Realm.[18] Being killed by an unsheathed Nightblood[19] or anti-Investiture[20][21] or consumed by Yelig-nar[22] prevents a person's mind from being preserved, though it is unclear if it also prevents them from going to the Beyond. Vasher has considered that question before, indicating he may be aware of the Beyond to at least some extent.[23] If a person was saved from the Beyond by the direct act of a Shard, the Shard may later choose to withdraw their Investiture, sending the person to the Beyond.[24] If someone uses Forgery to make themself die, they will not come back from the Beyond when the seal breaks,[25] and it seems unlikely that there is anyway for someone to return from the Beyond.

What happens in the Beyond itself is unknown in the cosmere and is the question Khriss most wants answered.[28]

While the Spiritual Realm is not the same as the Beyond, that distinction isn't necessarily immediately obvious to Shards.[2] It does not seem exceedingly difficult to at least grasp the basic premise, however, as Harmony came to understand the difference within moments of his Ascension.[29] Learning information about the Beyond itself, however, is at least exceedingly difficult and may be impossible, even for Shards.[30][31][32] Harmony, at least, still has not learned anything about it, though he considers going to it a kind of adventure.[9] Ruin claims that Mare "longed for Kelsier to join her in the Beyond," but it seems likely that he was simply lying to manipulate Kelsier and does not actually have knowledge of what occurs in the Beyond.[33][34]

While trapped in the Well of Ascension, Kelsier refers to Ruin as "the thing Beyond,"[18] but this is likely a misnomer as a Shard's power is concentrated in the Spiritual Realm.[35]

While all people who are not Slivers must go to the Beyond when they finally die,[1][5] the transitions of the following people to the Beyond have been observed:

While Brandon initially indicated that Shards might be able to learn to access the Beyond,[36][37] he has since indicated otherwise, particularly after the nature of death in the cosmere was more fully explored in Mistborn: Secret History.[30][31][32][38] When elaborating on this, Brandon has said that he doesn't want to ever give a definite answer as to whether or not there is an afterlife in the cosmere, as he feels it is important that characters can believe either way without being canonically wrong. As a result, questions about the nature of the Beyond will be RAFO'd.[38] For the same reason, Brandon has also RAFO'd questions about whether there is a capital-G God in the cosmere[39] and the relationship between the Beyond and the God Beyond.[40]

This page is probably complete!
This page contains most of the knowledge we have on the subject at this time.
It has yet to be reviewed.
Retrieved from "https://coppermind.net/wiki/Beyond?&oldid=170650"
Categories: