“Ishikk was a Purelaker, first and foremost. By tide and sun he was. ”

Ishikk is a fisherman who lives in the Purelake on Roshar.

He usually wears lake sandals and knee-length breeches. He has chin stubble, and goes shirtless in order to maximize his exposure to the sun.[1] As he is native to the Purelake, he presumably has the rippled skin of the Selay people.[2]

Like many Purelakers, Ishikk lives life at a slow pace and does not understand why foreigners are always in a hurry. He is very pragmatic; he enjoys his life in the Purelake and is usually focused on his fishing. As is common for his people, he prefers to be in the sunlight; he also likes to submerge his feet in water at all times, even while eating inside of buildings. He cannot fathom why people live in colder regions of Roshar, but he is also glad that the Purelake is not crowded. He speaks Selay and does not have any interest in learning other languages.[1]

Ishikk's name is derived from the Herald Ishar, who is sometimes known as "Ishi".[3] He is a devout follower of Nu Ralik, although he professes to worship Vun Makak in the Purelaker tradition.[1]

Ishikk is very experienced with the ecology of the Purelake. He is able to move through the lake with ease, avoiding natural hazards. He is observant of the tides and is able to shelter himself during highstorms. He is particularly knowledgeable regarding the fish that live in the lake. His expertise includes exotic fish such as the stumpy cort and kolgril that seem to have supernatural abilities,[1] presumably through bonds with spren.[4] 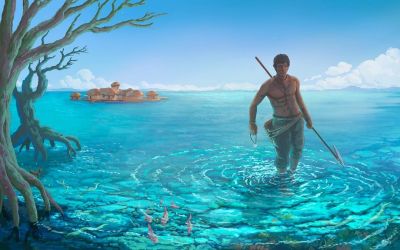 Ishikk spent most of his time on his own, rafting around the Purelake and fishing. He caught some common fish, but primarily sought more unusual species. He usually slept on his raft in Fu Abra, but enjoyed visiting other places in the Purelake. He did not wish to be tied down by a wife and frequently gave kolgril and other valuable fish to Maib, the owner of a cafe that he frequented, to ensure that she wouldn't have the leverage to bully him into a marriage. He admitted that he liked her food and that someday he might let her catch him.[1]

At some point towards the end of the Era of Solitude, Ishikk was approached by three unusual men. Their appearance was not consistent with any Rosharan ethnicities. Believing that they had given him false names, Ishikk instead called them "Grump", "Blunt", and "Thinker" based on their personalities.[1] The trio were in fact worldhoppers and agents of the Seventeenth Shard—Galladon from Sel, Baon from Taldain, and Demoux from Scadrial.[5][6] Ishikk found them odd, but he felt that way about most foreigners. He did not realize who they really were,[7] and assumed they were from another part of Roshar.[1]

Because Ishikk traveled to various places around the lake, the three men hired him as an agent to search for Hoid, although they did not fully explain Hoid's identity to Ishikk. Ishikk worked for the men for at least five months, visiting various villages and asking after anyone with Hoid's characteristics, but he did not find anything of interest.[1] Hoid was actually aware that the Seventeenth Shard was looking for him in the area, and was amused because they had followed a false lead.[5]

This page is complete!
This page contains all the knowledge we have on the subject at this time.
Big Smooth (talk) 23:11, 3 March 2021 (UTC)
Retrieved from "https://coppermind.net/wiki/Ishikk?&oldid=163678"
Categories: