This page or section needs to be updated with new information for White Sand Volume 3!
Be aware that in its current state, it may not include all additional content yet.

Kenton is a half-Darksider, half-Lossandin sand master from Lossand, on the Dayside of Taldain. Kenton is the current Lord Mastrell of the Diem.[2] 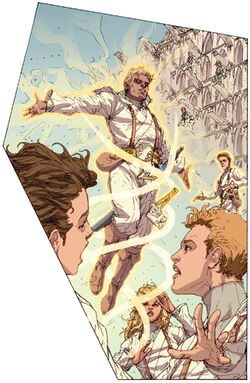 Kenton has golden blonde hair and a slightly tan-to-brown complexion, as a result of his half-Darksider heritage. Kenton's eyes are naturally blue. However, when he uses the full might of his sand mastery powers, his eyes glow with a golden light and his pupils seem to contract or disappear, leaving only the white of his irises.

Since childhood, Kenton has been an extremely weak sand master, only being able to control one ribbon of sand.[4] He loses his ability, possibly as a result of overmastery,[5] but later regains them, and is more powerful, controlling three ribbons not just one.[3] Following this, Kenton attempts to increase his abilities by deliberately overmastering, which eventually allows him to control five ribbons. Kenton is exceptionally skilled with a single ribbon capable of using it with a speed and precision unmatched by any other sand master.[2]

Kenton is skilled with a sword, his weakness with sand leading him to train with the Tower's guards.[4]

Kenton is the youngest son of Lord Mastrell Praxton. Despite none of his siblings having showed any ability to master sand, Kenton, ten years old at the time,[6] attempted to join the Diem. He was the last in his group to be tested and barely managed to turn his sand black. Praxton tried to stop Kenton from entering the Diem telling him that he had no talent for mastery, but Kenton argued with him, saying that the law says he has enough. Reluctantly, Praxton allowed his son to join the Diem.[4]

Kenton was only able to control one ribbon, and trained himself to become extremely skilled at using a single ribbon of sand. He refused advancement to the lowest rank of underfen four times, since accepting it would mean being relegated to that rank permanently.[4]

When he was eighteen years old[6] he insisted on running the Mastrell's Path to prove that he could do anything a Mastrell could do, and so deserved to be elevated to that rank. Prior to running the Path, Praxton offered Kenton advancement to a slightly higher rank of Fen if he wouldn't run the Path. Kenton refused his father's offer and while undertaking the Path, he killed the Sandling guardian, something thought impossible, destroying the Path forever.[4]

After Kenton's feat during the Path, his father was furious and once again offered Kenton the rank of Underfen. Kenton again refused and Praxton granted him the title of Mastrell. He explained to Kenton that the rest of the Diem would hate him for it.[7]

During the advancement ceremony, a group of Kertzian warrior-priests launched a surprise attack on the ceremony. Kenton, having also been trained in martial arts, led a group of Sand Masters in defense against the attack. Ultimately he failed and was buried in sand by Praxton's final act, which abruptly ended the battle. The Kertzians killed virtually everyone, leading Kenton to believe that he was the only survivor.[5]

He was found hurt and dehydrated by Khriss and her party. After they revived him with water, Kenton agreed to be their guide, and accompanied them to the city of Kezare. While in their company he kept his Sand Mastery a secret. Along the way they stopped at a Kerztian outpost, where Kenton bartered for supplies. There, he learned that there were other survivors of the attack. After they left the outpost he discovered that he could no longer use sand mastery when a group Kerztian warrior-priests attacked their party.[3]

He parted from Khriss after arriving in Kezare. He went to the Diem where he was found by Dirin, who informed him that Drile, the highest ranked Sand Master, was speaking for the Diem before the Taishin. Kenton immediately went to the Taishin to argue against what he thought was Drile's appointment to Lord Mastrell. While on his way there he discovered he had regained the ability to master sand, and remarkably he could now command three ribbons. Kenton was named acting Lord Mastrell, since he was the only surviving person holding the title of Mastrell. He argued for the Diem's survival to the Taishin when they attempted to dissolve it. He was given two weeks to attempt to change the minds of the heads of the other seven Professions.[1]

After he returned to the Diem he confronted Drile. Each accused the other of being the Kerztian traitor. A short fight with sand followed and Drile fled. Aarik arrived at the Diem, looking for a place to stay after returning from Darkside. The next day Khriss travelled to the Diem to discover that Kenton was not only a "sand mage," but the leader of the Diem.[6] After explaining the situation to Khriss, he was confronted by Ais, a trackt sent by the Lady Judge, ostensibly to protect him.

Kenton quickly realized Ais was, in truth, Heelis' spy, though he permitted her to accompany him as he visited several Taisha in an attempt to drum up support for the Diem. He managed to secure the Lord Admiral's vote under the condition that the Lord Merchant votes opposite, and the Lord Artisan's if the Diem pays off its debt to them.[8]

Following an assassination attempt and the return of his old friend, Elorin, Kenton sought out the Lord General, Raagent. Though initially opposed, Raagent promised to vote to preserve the Diem after Kenton saves his life from a Karak. [9] After returning to Kezare, Kenton found Drile attempting to sway other sand masters to his side and challenged him to a duel. Afterward, he went to visit Vey, the Lord Merchant but found little success. After reuniting with Khriss, the two of them, along with Baon and Aarik, searched the Diem for the missing money after dodging yet another assassination attempt, but located very little of the riches supposedly in the Sand Master's possession.[10] 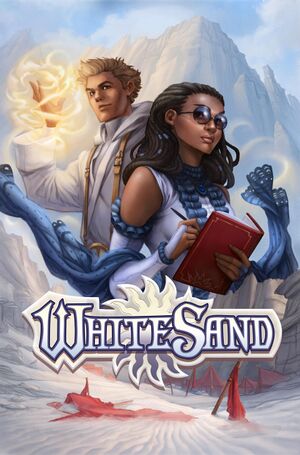 On invitation from Lord Admiral, Kenton went with Khriss to his party, where he learned that Delius intended to support him regardless of Vey's decision. After Khriss urged him to leave the party, the two of them stumbled on a collapsed construction site, where Kenton used his Sand Mastery to rescue the trapped workers. Having come to a realization, he returned to the Diem and begun to tell the other sand masters that they must begin to mend their public image by paying for their expenses and helping the common people. However, he was interrupted by Khriss seeking to learn sand mastery. As part of his new philosophy of how the sand masters should be run Kenton agreed to allow Khriss to join the Diem.[11][12]

Kenton decided that since he had already visited all the Taishin he could, his only hope was to study everything in his father's library that related to them. He hoped to find some way to outsmart or bribe Lord Vey but initially met with little success. Kenton explained to Ais how the position of Lord Admiral functioned and concluded it was the cause of Lord Delius's drunkenness and extravagance.[12]

Kenton went to get Khriss so that he could test her ability to sand master; after retrieving her Kenton was interrupted several times by sand masters with basic administrative questions. Khriss suggested that Kenton appoint someone to oversee the day-to-day administration of the Diem, and Kenton decided to appoint Elorin. Kenton tested Khriss for talent in sand mastery but she showed none. Kenton was disappointed by this because he had hoped another Darksider would have talent, however, Khriss said that she was not disappointed because she just wanted to know how the testing process worked. Kenton then showed Khriss the fighting pit where he intended to duel Drile. Kenton said that he believed his duel with Drile might as well be an execution because he could not possibly win as Drile was much more powerful than him.[12]

Kenton returned to visit Lord Vey in the hope that he could find some way to get Lord Vey on his side. After being made to wait for a long time, Kenton loudly exclaimed that he expected Lord Vey to continue paying tribute to the Diem for the same reason as always. Upon hearing this Lord Vey invited Kenton into his office for a private meeting. In this meeting, Kenton pretended to know why Lord Vey had been paying tribute to the Diem and attempted to use this knowledge to blackmail Vey into voting for him. However, Vey realized that Kenton did not, in fact, know why the merchants guild had continued to pay tribute and refused to vote for him.[12][13]

After Vey refused to vote to maintain the Diem, Kenton went to a restaurant. There he discussed the morality of blackmailing Lord Vey with Aaric and Khriss. Aaric felt that because Vey had a poor moral character Kenton was justified in using whatever means were necessary. Khriss stated that scholars at the Elisian University had debated whether someone is justified in committing a minor evil in pursuit of a greater good but that they had not come to a conclusion. The group was then attacked by Kerztian assassins. Kenton and Ais managed to kill most of them; one grabbed and threatened to kill Khriss if Kenton didn't surrender, but was killed by Jon Acron. Ais said she was surprised the assassins would attack that day as it violated the KerKor.[13]

This article is still missing information. Please help The Coppermind by expanding it.
Retrieved from "https://coppermind.net/wiki/Kenton?&oldid=164232"
Categories: