This article is about the place. For the Mistborn novel, see The Well of Ascension.

The Well of Ascension was a Perpendicularity, the manifestation of Preservation's power. It refilled every 1024 years.[1] 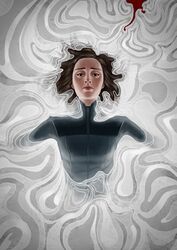 by Eleonor Piteira
Vin in the Well

As Allomancy is of Preservation, particularly strong Seekers such as Vin and Alendi could sense the pulsing of the Well of Ascension as it refills with power. This pulsing is a pure tone of Scadrial.[2]

In Terris prophecy, it was said to be hidden deep within the Terris Mountains. However, when the Lord Ruler consumed the power from the Well of Ascension and changed the world, he also changed the location of the Well. The Well was moved to Kredik Shaw, and lay in a chamber underneath the Lord Ruler's palace.

Before Vin released the power within the Well, it served as a prison for the Shard Ruin for several millennia. Preservation created the prison by sacrificing his mind to create something capable of containing Ruin's mind. With his mind gone, Preservation's body and power were left in the world, creating the Mists and the Well of Ascension.

It is unknown whether the Well still exists after the Catacendre.

The entrance to the Well lies in the Lord Ruler's study, and was designed to be opened by an Ironpull of tremendous strength, such that the Lord Ruler was one of the few individuals capable of opening it. One section of the wall, presumably weighing several tons, could be pulled on to reveal a passageway, which leads to the the stone chamber that houses the Well of Ascension.[3] The Well appears as a shimmering, glowing white pool full of liquid metal. The pool lies in a shallow depression in the rock and is only a few feet in diameter.[4] 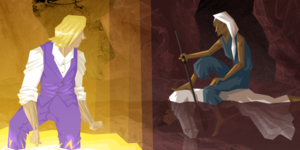 by LittleGreyDragon
Kelsier meeting Hoid at the Well

This article is still missing information. Please help The Coppermind by expanding it.
Retrieved from "https://coppermind.net/wiki/?title=Well_of_Ascension&oldid=161485"
Categories: