This page or section contains spoilers for The Lost Metal and Tress of the Emerald Sea!
This information has the ability to potentially ruin elements of the plot for the reader. Proceed with caution if you have not read these books.

Steel is the External Physical Pushing metal, made from iron and carbon.[1] An Allomancer burning steel can Push bits of metal away from their "center of self,"[2] and can also use steel to sense the presence of metal nearby. Steelpushing is not dependent on magnetic forces or Allomatic power--most metals (with the exception of aluminum and some of its alloys) can be Pushed. Feruchemists can use steel to store physical speed, and when used as a hemalurgic spike, steel steals Physical Allomantic powers.

A steel Misting is known as a Coinshot. Steelpushing is the art of burning steel to push metals away (in a straight line) from the user's "center of self,"[2][3] which is likely tied to the Allomancer's Cognitive and Spiritual aspects. There are two general rules for steelpushing, which also apply to ironpulling, its paired opposite. The first rule is that the strength of your push is roughly proportional to your physical weight. This means that larger Allomancers can generally steelpush and ironpull more powerfully than a smaller counterpart. While proportional, the force exerted by a steelpush is much greater than the Coinshot's weight, allowing them to push themselves into the air by pushing on a piece of metal that is on the ground (or is anchored to something that weighs more than they do). The second rule is that metal that is at least partially inside a person's body cannot be affected by steel. Both of these rules can be overcome by a sufficiently strong Coinshot, however.

The force of the Push upon an object is inversely proportional to the Coinshot's distance to said object. This continues until the Coinshot hits a zenith, or point of maximum altitude. This zenith is higher for more powerful Steelpushes, such as those burned in conjunction with duralumin, or with more massive steel anchors.[4][5][6] 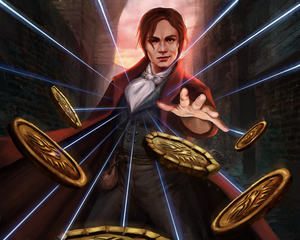 by Anna Kay
A coinshot shooting some coins

When burning steel, blue lines emerge from the Coinshot and connect themselves to pieces of nearby metal, with the size of the steel line indicating how big the metal is. The steel lines can typically only be seen by the Coinshot.[7] The steel lines manifest themselves on the Spiritual Realm and can be cut or interfered with,[8] supposedly due to their lack of physicality, they can pass through physical objects such as walls, allowing a Coinshot to ascertain the location of metals outside of their line of sight, and detect such things as metal girders within walls.[9][citation needed] It is also possible to use the steel lines to see via the trace metals in everyone's bodies and in the objects around them, or even Axi and electromagnetic bonds.[10][11][12][13] A Coinshot could identify specific metals, or even colors, with the steel lines.[14][15]

Steelpushing is commonly considered a flashy ability. It allows the user to fly through the air in quite spectacular ways, using only coins (or other small metal objects) placed on the ground. This functions through essentially attempting to push the planet itself, which, as an object far more massive than one's self, causes one to be pushed away.[7] It can be used offensively, as the name suggests, to shoot metal objects as projectiles. As the coins are much smaller than the Coinshot, they gain quite a bit of speed over time. Steelpushing can also be used defensively, by creating a bubble around the user to deflect incoming metal objects, although in case of very fast objects (such as bullets) it doesn't provide full protection.[16] Steelpushing liquid metals works similarly to a ferrofluid.[17]

When used in conjunction with firearms steelpushing is an incredibly powerful tool. By shooting a regular bullet and then pushing on it as it leaves the barrel, the bullet can be given a large amount of force, enough to pierce straight through wood and other cover and kill anyone on the other side unexpectedly.[16][18]

Steel Allomancy is strongly resisted by the body of sophonts, thus making metalminds embedded into the body difficult to push. Due to this, some Feruchemists choose to surgically implant their metalminds into their body.[9][19][20] However, a strong enough Steelpush, such as one powered by the Mists, is able to overcome this resistance.[9][19] The degree of resistance is proportional to how Invested the target is, and would therefore require more force to push metal in the body of someone such as Susebron and an average Scadrian, who would be harder than a Drab.[21][21]

It is also possible for a skilled Allomancer to push on a specific part of a metal object.[22] They could also have better control over their Pushes, such as creating a steel bubble that deflects projectiles while not affecting the metal on the user.[23] Through unknown means, a Coinshot could push on non-metal objects.[24] It is possible to effect the polarity of Axi via a steelpush, under the right circumstances.[13]

The Law of Conservation of Momentum holds when using Iron Feruchemy, therefore a Coinshot who has access to Iron Feruchemy can alter their mass in order to increase or decrease their velocity. When one increases their mass, their velocity would decrease in order to equalize their momentum, and vice versa.[9][25][26] When drag is put into the equation this create, one gets a equation with explicit maxima, more simply, when one decreases their mass too much the force of drag overcomes the increase in velocity via Conservation of Momentum, and therefore causes one to decrease in velocity; this also means there is a specific amount of stored mass where one's velocity hits its maximium.[9] When taking into account momentum and drag formulae, this should have two zeroes, that is to say, when one stores or draws upon too much mass, it would lead to their velocity falling to zero.

Steelpushing can also be used alongside Iron Feruchemy in order to take advantage of Steelpushing's proportionality to the mass of the user, allowing them to increase the strength of their Steelpushes by increasing mass, or allow them to more easily push themselves away from an object by decreasing their mass.[citation needed]

Twinborn with Steel Allomancy and Iron Feruchemy are known as Crashers. Only three known Crashers exist in recorded history, Waxillium Ladrian is one of these three.[25]

A steel Ferring is known as a Steelrunner. Steel is used to store physical speed. Then, by tapping their steelmind, a Steelrunner can move many times faster than a normal human, even one burning pewter with duralumin, as well as burn metals faster.[27] While storing speed, a Steelrunner is very sluggish and is described to feel like moving through molasses.[3] Sazed, a notable Feruchemist during the days between the Final Empire and the Catacendre, regards steelminds as one of the most difficult metalminds to fill.[28] Steelrunners can withstand the Gs they are put through, but they can't ignore wind resistance and friction and will burn up if they start running too quickly.[29] This can be overcome with Edgedancers' abilities.[30]

A steel Compounder would be able to use steel to have a nearly infinite supply of physical speed. They would not be able to run faster-than-light.[31] If not careful, the Steelrunner could kill themselves from running too quickly by factors like air resistance.[32]

A fabrial with an steel cage can change the fabrial's polarity, pushing specific elements from itself.[35]

Putting a steel tool near growing Aether substance repels the substance away from the tool as it grows, due to this, it is a tool commonly used amongst Sprouters to create Roseite plugs on holes in a ship's hull.[36]

This article is still missing information. Please help The Coppermind by expanding it.
Retrieved from "https://coppermind.net/wiki/Steel?&oldid=177309"
Categories: