The current structure of Dominances, in Vin's time, involves provincial lords each with command of, and responsibility for, their own skaa. This organization has been in place for two hundred years and grants the nobility greater freedom than previous systems. The Lord Ruler seems to be uncomfortable with this and counteracts it with increased obligator activity [2].

After the fall of the Lord Ruler, some of the Dominances became independent kingdoms. 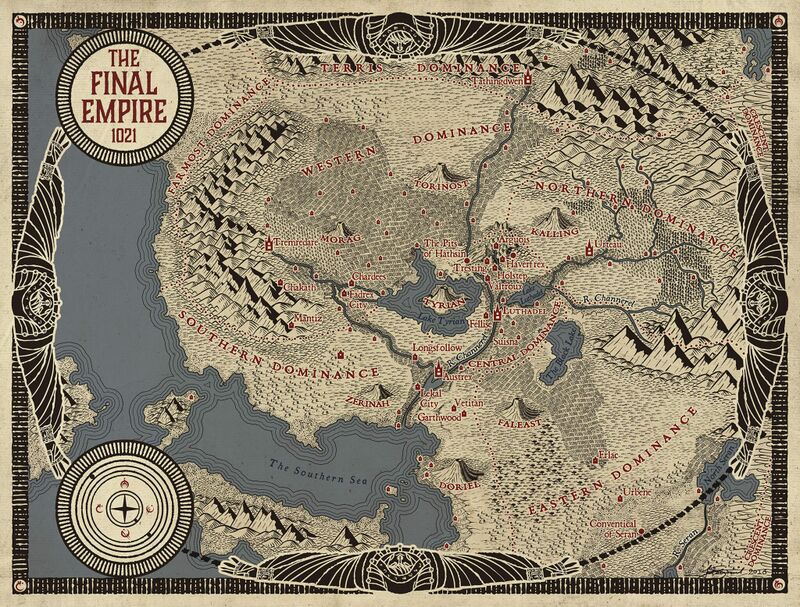 by Isaac Stewart
Map of the Final Empire

Each of these Dominances contains one of the Lord Ruler's storage caverns.

There has not been a significant rebellion in the five Inner Dominances in two centuries[2], before Yeden hired Kelsier.

Before Ruin's release, earthquakes were very rare in the Inner Dominances [3].

The Lord Ruler's influence was pervasive here. The obligators and Inquisitors of the Steel Ministry were never far away. They kept the nobles in line, witnessing contracts, both large and small. Luthadel, inside the Central Dominance, had a large underworld element which survives through theft and trickery, composed of both regular crews and illegal Allomancers[6]. Large and violent mass executions served to remind both skaa and nobles alike that the Lord Ruler reigned supreme.

After the Lord Ruler's death, Elend Venture became king. During the Siege of Luthadel Elend was voted out of office and replaced with Ferson Penrod. After the siege ended with the attacking generals' surrender to Vin, Penrod remained king of the Central Dominance under Elend's overarching New Empire.

The Central Dominance has normally mild winter, with no snow at all in some years [7]. It was good for grazing land as well. The land under Luthadel was rich with metal, most notably tin and brass. Another interesting trait of the Central Dominance was the massive complexes of caves located within its borders; the dominance contains hundreds of cave systems [8].

The River Channerel ran through Luthadel and the Central Dominance on its way to the Southern Sea. The Central Dominance contained two major bodies of water, Lake Luthadel to the north and Lake Tyrian to the west, so named for the ashmount Tyrian that it was adjacent to.

The dominant plant life in the Central Dominance is hardy scrub well adapted to ash [9].

The most important resource that the Central Dominance produced was atium, from the Pits of Hathsin. Atium made up the most important currency in the Final Empire, useful for paying for kandra contracts, as well as payment for many noble deals. The Central Dominance also was known for its metalworking, refining ore into usable metals. There are hundreds of forges and refineries in Luthadel [4].

Since it contained Luthadel, the Central Dominance's most important economic function was to serve as a place where business was done, contracts signed, and bargains struck. This also allowed the Lord Ruler to have a tight grip on the economy of the Final Empire. Since Luthadel was his home he could keep an eye on the scheming nobility.

After the Collapse, Straff Venture takes control of the dominance. Under Elend's New Empire, Janarle is king of the Northern Dominance[10].

The Northern Dominance contains only one ashmount, Kalling, which is located to the north of Urteau.

The streams and rivers of the Northern Dominance support both forests and farms.

The Northern Dominance has coal mines in the area of Urteau[11].

Urteau also had canals for streets which allowed for the easy transportation of goods. However when the canals were drained, Urteau became backwater and its trade influence diminished[12].

Known communities included Statlin City (the site of a storage cavern), Urbene, and Erlac. Other places of interest included the Conventical of Seran.

This Dominance contains the ashmount Faleast.

Major bodies of water include the Black Lake (which extends slightly into the Central Dominance) and the River Seran as well as its associated lakes North Seran and South Seran. (A small part of South Seran appears to extend into the Crescent Dominance.)

Gold is mined in the Eastern Dominance, in the area where Spook was born.[11]

Fadrex City became the capital of the Dominance after the Collapse since it was more defensible than Tremredare, originally under king Ashweather Cett. Aradan Yomen, previously the leading obligator of the area, eventually became king of the Western Dominance, still ruling from Fadrex City [14].

The landscape contains eroded plateaus, spires of rock, and canyons. The rock formations form natural fortifications for Fadrex City. The dominance's plateaus represent some of the highest elevation farmland in the Final Empire [15].

Fadrex City is the site of a storage cavern.

In the northern part, the buildings have a fluid, organic shape quite different from Luthadel.[16]

Numerous canal routes run in the area of Fadrex City, including the Conway Canal[15].

The capital under the Lord Ruler was Austrex, though in the time of the New Empire Lekal City was the seat of King Audil Lekal[17].

The ashmounts Zerinah and Doriel are in this Dominance. It has a coast on the Southern Sea.

Many people in the Southern Dominance have darker skin than most peoples on the inner Dominances, though not as dark as some Terris peoples can get.[13]

At the edge of the empire, these dominances (at least those away from the sea) border on - and perhaps include part of - the burnlands deserts inhabited by koloss, who can survive the conditions. Humans escaping from the Final Empire live in the border area.[19]

After Ruin was freed, there Outer Dominances became unable to support crops and were overrun by koloss[18].

Places of interest included Mount Derytatith, the location of the Well of Ascension prior to the Ascension of the Lord Ruler.

There are a lot of small villages across the Terris Dominance.[21][22]

Located to the west and north-west of the Western Dominance, the Farmost Dominance is largely unknown. It contains a significant area of sea.

Before being replaced by the kandra OreSeur, Lord Renoux held great power in this Dominance[5], though Vin's cover story suggests House Renoux lives in Chakath in the Western Dominance[7].

The Crescent Dominance is the farthest eastern dominance in the Final Empire. No character in the series is from this place, nor have any of the characters traveled there. As such, very little is known about it.

The Dominance contains a small part of the lake South Seran (which is mostly in the Eastern Dominance). Otherwise, the land appears to be mostly sand dunes.

This dominance either borders on or is part of the burnlands at the edge of the empire inhabited by bandit and nomad tribes made of fugitive skaa rebelling against the Final Empire (the "wasted men"[23]), who survive by raiding the Eastern Dominance. Therefore, conflicts in this southeastern area of the empire are common. Koloss hordes are sometimes dispatched against the wasted men; even a Steel Inquisitor may be sent against successful leaders such as Vershad[23].

This dominance is separated from the mainland by the Southern Sea[1]. It contains at least two major islands.

This dominance likely borders on, or includes, the burnlands at the edge of the empire where the "wasted men" (tribes rebelling against the Final Empire) live.

This article is still missing information. Please help The Coppermind by expanding it.
Retrieved from "https://coppermind.net/wiki/Dominance?&oldid=177180#Terris_Dominance"
Categories: