OreSeur is a kandra from Scadrial.[3]

His contract is with Kelsier at first. He mainly imitates Lord Renoux and keeps an eye on Vin while she acts as Valette Renoux. Upon Kelsier's death, his contract is passed to Vin. She is angry with him because he knew of Kelsier's plan to die and inspire the skaa to fight, but did not stop it, though OreSeur only acted in accordance with his contract. Eventually, Vin’s disgust at the idea of a kandra eating humans drives her to order OreSeur to ingest the bones of a wolfhound instead. Mid-transformation, he is secretly killed and replaced by TenSoon.[2] 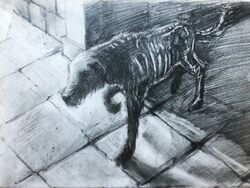 by Lydia Futral
In his dog body

His contract is assigned to Kelsier by KanPaar even though it would be to act against the Lord Ruler, due to the high price Kelsier was willing to pay for it.[4] Being a rather rebellious member of the Third Generation, OreSeur is one of the few kandra willing to accept this job, and he leaves the Kandra Homeland after a long period of retirement to do it.[5]

Like TenSoon, he is of the third generation of Kandra and is thus over 700 years old.[4]

This article is still missing information. Please help The Coppermind by expanding it.
Retrieved from "https://coppermind.net/wiki/OreSeur?&oldid=162193"
Categories: