“Well then, I've got quite a number of philosophical puzzles you might enjoy. . . . ”

Hammond is a skaa Misting on Scadrial. He is a member of Kelsier's crew who helped organize the rebellion's army of skaa.[2]

Ham is humble, long-winded, and kindly.[3] He argues about the rightness of the fight they are in. He also shows attachment towards his crew and soldiers and wants to make sure there are greater plans for them.[4]

Ham usually appears content.[5] He works to give his family a better life and dreams of moving with them to a city where they can live like noblemen. He wants a life without fear or division.[5]

He has very short hair,[6] and always wears a loose shirt and vest, both sleeveless; however, when acting as General Hammond for Kelsier's army, he wears a uniform which he dislikes.[5] He conditioned his support as General to Elend to stop using a uniform, so, he went back to his customary sleeveless vests.[7]

Ham likes philosophical debates. He questions if going against the Lord Ruler was good or bad, as overthrowing God is not in itself something good.[8] He also likes to talk about atium economics.[9]

It is due to his philosophy that he figures out that skaa are made different from noble men, with factors such as the number of children to birth or to physical differences like height.[4]

Ham is a Thug.[2] Thugs--or, Pewterarms, as the nobility prefer to call them--are the most sought-after Mistings. A competent Thug can stand against a half-dozen regular men, and he can lift more, endure more, and move faster than any other hired muscle.[5]

The way Ham fought, he simply attacked with raw strength and speed, throwing enemy soldiers out of his way.[10]

As a General he might have been a bit of an anarchist at heart, but he could be a very good leader if he was given a small team. Though his guards weren’t the most disciplined, polished soldiers, they were fiercely loyal.[11] He promoted people with good natured disposition.[12]

Ham grew up in the streets of Luthadel. Son of two skaa parents and a noble grandparent.[13] When he grew up he ran general security for jobs, providing his crewleader with manpower and warriors, assuming such are necessary.[2]

He joined Kelsier on his skaa rebellion, initially working for Yeden because of the promise of payment, including the Lord Ruler’s atium. His role was training the skaa army.[2] He did so on secure caves away from Luthadel becoming General Hammond. He would leave the crew for months to train and inspect them,[14] and made good progress with their skills.[4]

He was later replaced in the training camps by Yeden and sent back to Luthadel to work closer with Kelsier.[4]

He also trained Vin in using Pewter. Through doing this he gained a friendship with Vin, who accompanied him when travelling to meet the Garrison in Luthadel where they found that their army was exposed and they were marching to fight them.[5] Ham was asked by the Garrison to join them, and Kelsier asked him to do so and be the inside guy, though Ham decided he would not betray them from the inside.[15]

After most the army was lost to the Garrison killing Yeden in battle and scattering the rest,[15] the crew was ready to quit, but with the Lord Ruler executing random skaa in reprisal for the army creation, Kelsier rallied the team to push further and used the fact that the Garrison was out to strike directly into Luthadel.[16]

Ham was then tasked to bring the remaining troops into Luthadel and continue recruitment to join the rebellion. They would be trained in small packs without the knowledge of each other’s existence.[17] He was successful at training this army as well.[18]

When Renoux, along with his servants, staff, guards, and Spook were captured, Kelsier decided to rescue them. Ham fetched one of the rebel teams and led the attack to rescue them while Kelsier fought the Steel Inquisitor.[19] Ham successfully rescued all of the prisoners, while Kelsier remained behind and killed the Inquisitor but was killed himself when the Lord Ruler arrived.[10]

After Kelsier’s death, he left instructions for the final assault. Ham would take care of four remaining noble houses, fetch the army and go to warehouses. The assault leader would be Clubs, though.[10] He managed to bring down Keep Elariel and kept fighting until the end.[20]

After the death of the Lord Ruler , he agreed to be the captain of Elend’s guard on the condition that he would never have to wear a uniform.[7] He, along with the rest of Kelsier’s crew acted as advisors for Elend during the siege of Straff and Cett’s army.[21] Ham remained level-headed, even with the threat of the Koloss army.[22]

Due to his loyalty to Elend, he tried to help him research legal ways for him to keep his throne. However, he is not a scholar and the task proved difficult.[23] He also stayed by his side when his throne was taken and helped execute several of his personal ideas.[13] Still, when the taking of Luthadel seemed inevitable, he along with Breeze, Dox, Sazed and other original crew members met behind Vin and Elend’s back to plan the next steps.

They decided to stay and fight while sending out Vin, Elend, Spook, Twyndle and Allrianne so they could survive. Sazed told Vin the Well of Ascension was on the North.[24]

When the Koloss army finally attacked, Ham led the defense, but his Keep fell and he lost most of his strength. He along with Breeze and Sazed were looking to evacuate as many survivors as possible.[25] Ham was deeply wounded and could not fight anymore. When Vin came back to the city, he gave her his pewter.[26] He fell unconscious after that and by the time he woke up, Vin had taken back the city. He then helped Sazed, who fought with Marsh when trying to stop Vin from releasing Ruin.[27] He found and helped the organization of Luthadel’s storage, which had been created by the Lord Ruler.[28]

After Ruin was released, Ham continued to be part of the inner circle and gave important ideas on growing plants that didn’t need light. He also participated on the plots to take Fadrex City.[29]

He trained and led the new army for the siege of Fadrex City. As he gets very attached to his people, he argued constantly with Elend and Vin to continue marching through the mists as their soldiers were dying to them.[30]

He still followed orders and took his army towards the siege and though he participated on the planning he did as instructed by Elend. Which in this case meant hold the siege, avoid supplies into Fadrex and wait for them to try diplomacy and sneaking in tying to find the storage cache that they were missing.[31]

Ham kept leadership of Mistings and shared responsibilities with Demoux, until the second was sent to Luthadel with Mistfallen.[32] So he kept the army while Vin was taken and Elend went to capture Koloss.[33]

He was responsible for making Elend decide not to release the Koloss on the city and followed his command to retreat.[34]

Ham fought in Fadrex City and tried to follow to fight in Luthadel until the Catacendre which he survived, and finally reunited with his family.[35]

The details of Ham's life after the Catacendre are unknown. He is the only member of the Preservers without a known honorific title, but his legacy is visible in the names of Hammondar Bay and the Hammond Promenade in Elendel's 2nd Octant.[36] Furthermore, a month of the Scadrian calendar is named Hammondar, presumably in his honor.[37]

A "Hammondess scion" was appointed to a judge's seat by Governor Replar Innate, likely due to corruption.[38] This may indicate a noble house of Elendel which descends from Hammond. 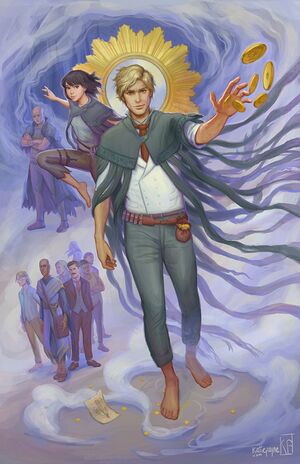 Mardra is Ham’s wife who he left behind until the death of the Lord Ruler, to protect her from his job. She is a seamstress who lives outside the city and tells people her husband works in the Garrison. He missed her as he only sees her a couple of months a year.[5] Together they have two children.[13]

Ham is very loyal to Kelsier, but is also worried about him and his ego. He along with Dox and Breeze try to restrain him when he goes overboard.[5] Kelsier on the other hand, considers Ham as prone to think about things that no sane man would consider. Still, he listened and the debate on if skaa were made inferior was an idea Kelsier never forgot.[4]

Ham and Breeze are good friends as well as colleagues. The warrior philosopher is a foil for Breeze. Since Breeze tends to be arrogant, long-winded, and manipulative, and Ham is humble, long-winded, and kind, they tend to disagree a lot and pick on each other.[3]

Vin likes Ham, and he in return. He trains her on burning pewter and sparring.[39] He helps take care of her the first few times when she returns injured from a mission.[40] When Vin was being influenced by Zane, Ham was suspicious of her honesty and thought she might be at some point a liability.[41]

After the death of the Lord Ruler, Ham became Elend’s captain. He respected Elend but it took him some time to believe in his capabilities as a leader[42] They befriended each other and Elend trusted him as a friend.[11] Ham stood by Elend's side and encouraged him as he researched methods of keeping the throne.[23][42]

“You know I’ll join your crew no matter what the job. This sounds crazy, but so do most of your plans. Just...just tell me. Are you serious about overthrowing the Lord Ruler? ”

“We may be friends, but when it comes to fighting, none of us would hesitate to kill the others.” ”

—Ham to Vin on the Garrison[5]

This page is probably complete!
This page contains most of the knowledge we have on the subject at this time.
It has yet to be reviewed.
Retrieved from "https://coppermind.net/wiki/Hammond?&oldid=162291"
Categories: