Shan Elariel is a noble of House Elariel on Scadrial.[2] She is a Mistborn[1] and the former fianceé of Elend Venture.[2] 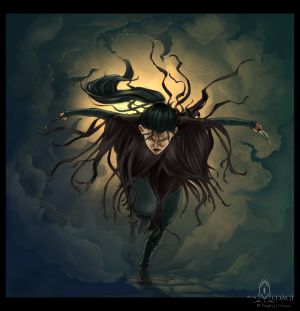 “If you think any other important nobleman will ever pay any attention to you, then you are mistaken. Elend likes to shock the court—and so, naturally, he chose to do so with the most homely and lumpish woman he could find. Take this opportunity; you shall not soon find another. ”

Shan is tall and striking, with long, dark auburn hair.[2][3] She has dark, expressive eyes and an attractive figure.[2][3] Her appearance is generally immaculate, and she wears fine dresses and jewelry.[2][3] When she fights as a Mistborn, she pulls her hair back and wears black trousers and a black shirt, along with a mistcloak.[1]

Shan is clever and exceptionally confident.[2][3] She is used to getting her way at all times, partly due to her ability to Soothe those around her.[2][4] As a member of a great house, she considers herself superior to most other people, even other nobles. She maintains a demeaning attitude towards those she considers below her station, openly and calmly threatening and insulting them.[2][5] Despite the fact that many in the court fear her, Elend calls her "harmless".[6] Vin believes that she personifies the ideal woman among the Luthadel elite.[3]

Although Shan is self-centered, her beauty and charisma attract people to her.[2] She is highly informed about other members of the court, and she is both skilled and aggressive in house politics.[2] Those loyal to House Elariel, including a Terrisman steward and a number of Allomancers, are willing to perform subterfuge or even kill at her direction.[1]

Shan is a Mistborn and is able to burn all of the metals known during the Final Empire. She uses brass most often, but she also uses other metals such as steel, pewter, iron, atium, and copper during her fight with Vin.[1] She is wealthy, and has more than one bead of atium when confronted by Vin.[1] She is fully trained in both Allomancy and hand-to-hand combat.[1][7] Several years later, Vin recalls her fight with Shan as a difficult one.[8] 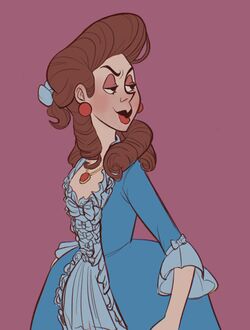 Shan became engaged to Elend Venture around 1021 FE.[2] It was presumably a political engagement between the two houses, as no movement was made towards a marriage for a year.[2] Although they technically never broke off the engagement, Shan became known as Elend's "former fiancée".[4][5] Elend was flippant about the situation, but Shan seemed to hold some personal bitterness about the fact that he did not seem to care about marrying her.[3][6]

Despite this setback, she was a budding master of house politics, and kept an eye on Elend since he was the heir to House Venture, one of the few houses that had more power than her own.[2] Shan's desire to keep tabs on Elend was the reason that she was willing to interact with Vin in her disguise as Valette Renoux, after she was seen talking to Elend.[2] At one point, Shan even sent her Terrisman steward to covertly look at some books that Elend left on his table to try and learn what he had been reading about,[2] likely because she suspected that he had rebellious leanings.[4]

Shan met Vin at her first ball as Valette Renoux, and Vin was struck by her haughty attitude.[2] Shan mercilessly insulted Valette and attempted to subtly Soothe her emotions in order to control her, but Vin noticed it thanks to training that she received from Breeze.[2] Kelsier received further confirmation that Shan was a Soother from a disguised Hoid, who also told him that Shan kept some spare brass in her glove.[2] 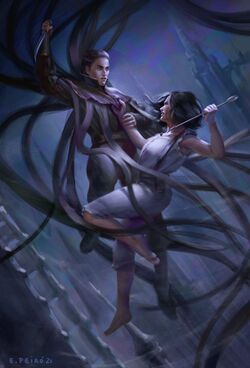 Vin continued to subject herself to Shan's abuse in order to maintain her Valette persona.[5][3] As "Valette" gained confidence, Shan became even more insulting towards her and made stronger use of her Allomancy, eventually tasking Valette with digging up more dirt on Elend.[3] Vin tried to warn Elend about Shan, but he did not share her concern.[6] Shan realized that Valette's allegiance was with Elend, and no longer wanted anything to do with her.[6] Vin was frustrated that she could no longer learn more about whatever Shan was plotting.[9]

Shan's plans soon took a darker turn; Vin learned from Kliss that Shan planned to have Elend assassinated in his quarters after a ball at Keep Venture.[1] Kliss's scuttlebutt indicated that Shan had confirmed that Elend was reading forbidden books and hoped to damage House Venture's reputation by revealing this fact to the Steel Ministry. Meanwhile, Straff Venture was said to be complicit in the plot, as he saw it as a chance to eliminate his "unworthy" heir alongside two young noblemen from rival houses who would be meeting with Elend—Jastes Lekal and Telden Hasting.[1] Vin immediately left to try and save Elend and found Shan, who was revealed to be a full Mistborn.[1] Shan was accompanied by another Mistborn and several other Allomancers who served House Elariel.[1] Vin was able to find them immediately by piercing Shan's coppercloud.[7]

Shan was shocked when she recognized "Valette"; a fight commenced, and Vin was able to take on the entire group of Elariel Allomancers. Eventually, Vin and Shan fought one-on-one, and Shan exhibited a surprising level of skill with both Allomancy and glass daggers.[1] Both Shan and Vin used atium during the fight, but Shan had a larger supply, giving her an advantage.[1] However, Shan was tricked into believing that Vin's atium had run out; she was hit in the chest by an arrow in her confusion when Vin burned the last bit of her reserves. Vin broke off the shaft of the arrow and stabbed Shan in the heart with it, killing her.[1]

This page is complete!
This page contains all the knowledge we have on the subject at this time.
Big Smooth (talk) 00:57, 2 May 2020 (UTC)
Retrieved from "https://coppermind.net/wiki/?title=Shan_Elariel&oldid=151952"
Categories: