This article is about the Vessel. For the Aon, see Aon#Ati. For the seon, see Ati (seon).

“Death is not evil, Kelsier. Death is necessary. ”

Ati is a human and the original Vessel of the Shard Ruin, hailing from the planet Yolen.[3] He and Leras, the Vessel of Preservation, created Scadrial together before Leras betrayed him and trapped him in the Well of Ascension.[4] 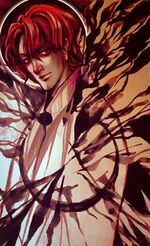 “Think of me as a caretaker—the one who watches the shop and makes certain that the lights are turned out, that everything is cleaned up, once closing time arrives. ”

Little is known about Ati's appearance; he has flame-red hair, and a welcoming, friendly smile. When taking on human form, he wears a robe, and has shadows moving beneath his skin, akin to spines or spider legs. They push against his form, making it pucker outwards erratically.[2] How intense this effect is varies; it's sometimes less pronounced, and sometimes more.[6] When speaking to Vin, Ati uses Reen's voice, though he sounds more aged and fatherly.[5]

As a mortal, Ati was known for being kind and generous. After taking up Ruin, he fought against the destructive impulses it brought about for many years.[7] Over time, however, Ruin won out, and adapted this kindness to its own intent.[8]

Presently, Ati wants to see the destruction of everything in existence. He believes that all life must end eventually, and to force it to carry onward past its expiration date is cruel. In his opinion, the destruction he causes serves a creative purpose; without death, there can be no further life.[2][9] At the same time, Ati is prideful and boastful. He seems to revel in mocking those he has defeated, and will appear in front of his victims to gloat about his victory.[2][5] This very quality is his weak point, as it often leads him to underestimating his opponents.[10] 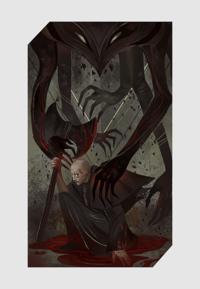 by eyeronis
Commanding an Inquisitor

“I'm all around you—the air you pretend to breathe, the ground beneath your feet. I’m in that knife and in your very soul. ”

Ati is a Shard of Adonalsium, making him one of the most powerful entities in the cosmere. He is immortal, unaging, and incorporeal; he fuels the magics of Hemalurgy and, in part, Feruchemy.[11] Thanks to being heavily invested in Scadrial, he can alter any text other than what is written in metal, changing it to suit his needs.[12] He can also speak to any person wearing a hemalurgic spike.[13] This all comes at a cost of a drastic personality change, as his mind was forced to adapt to Ruin's intent.[8]

Apart from his supernatural abilities, Ati has proven to be adept at deception, when he wishes to be. His alterations are subtle enough to trick the unaware into thinking they are still reading the original text.[14] When appearing in person, he can easily play a role of another; most notably, he was speaking in Reen's voice in Vin's head for years without tipping her off to the fact that she wasn't hearing her own thoughts, and he mimicked Kelsier's voice to Spook to drive him to serve Ruin's purposes.[9][15] Despite his destructive, megalomaniacal tendencies, he is easily able to play someone kind and affable.[16]

Nothing is known about Ati's origins and life prior to the Shattering, other than that he came from Yolen.[17] For unknown reason, he and a group of others broke cosmere's creator deity, Adonalsium, into sixteen pieces.[18] Of those sixteen, he took up Ruin, and departed alongside Preservation for an empty star system that would eventually become Scadrial.[4]

Following his death at the hands of Vin, Ati's body reappeared at the site where the two clashed.[19] His Cognitive Shadow briefly manifested in Scadrial's Cognitive Realm, where he was initially confused, wondering if he'd found himself on Vax. Unfortunately for him, he manifested near Kelsier, who promptly decked him in the face as retaliation. With glum acceptance, Ati faded away into the Beyond.[20]

It's unknown what, if any, relationship there was between Ati and Leras prior to the Shattering. The two left Yolen together, though it's unclear whether this was due to personal attachment or simply because they realized the need for their Shards to balance each other out.[4] However, Leras tricked Ati; first convincing him to create Scadrial together, under the pretense that he'd be allowed to destroy it later, then sacrificing himself to trap Ruin's mind within the Well of Ascension.[21][22]

By the time of Ruin's release, the two are extremely hostile to each other. Ati is dismissive of Leras, mocking his weakness and the limitations placed on him by his intent.[2] Leras hates how Ati used his power to twist and change their religion to worship only himself, and bemoans the change in Ati's personality brought about by the Shard.[23][24] Neither Vessel is afraid of the other; Ati, because he doesn't believe Preservation is capable of opposing him, and Leras, because he's already dead and thus out of Ati's reach.[2][16] 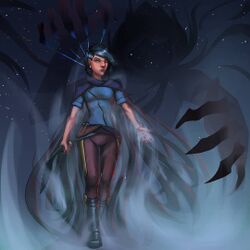 by EccoS
Vin and Ruin

“You're all on my side, Vin. I created you. You’re my tools—each and every one of you. ”

Ati considers Vin one of his greatest agents, and has taken great pains to twist her to his purposes in order to have an appropriate tool to bring about the end.[5] She was selected at birth due to an unusual combination of circumstances: she herself a Mistborn, with a Seeker sister and an insane mother whom Ruin could influence. As such, he drove the mother to kill the sister and put her power into a Hemalurgic spike that would become Vin's earring.[25]

After Reen's death, Ruin often makes use of his voice, speaking to Vin through the earring to influence her, mostly to make her less trusting of others.[9] He also alters various texts to convince people that Vin is the Hero of Ages, leading to her visiting the Well of Ascension. There, he puts on a kindly persona to convince her to release the Well's power and thus free him.[21][16]

In the period following his release, Ruin frequently speaks to Vin, trying to beat down her spirit and ensure she would not fulfill Preservation's plans for her. However, it's this very gloating that makes Vin realize that she's not speaking with a force of nature but a person, with very human failings. Rather than feeling defeat, she begins to hope once more that Ruin could be defeated.[5] Ati's final mistake with Vin is killing Elend, thinking it would push her to the depths of despair. Instead, she rallies and, freed from her last tie to the world of the living, challenges him directly, killing them both.[10]

Kelsier first learns of Ruin's existence after his death, when he witnesses Leras scream at Ati in defiance.[26] During the time he spends trapped in the Well of Ascension, he learns more about the Shard and even uses bits of its power to see the events happening beyond the Well.[22] He comes to fear the possibility of its release, and tries to aid Leras in stopping Ati from breaking free, albeit to no avail.[16] After Vin releases Ruin, Kelsier sets out to find a way to defeat it.[27]

Ati himself seems to find Kelsier amusing, and Leras notes that even the man's old self would laugh at the situation.[24] When he appears to Kelsier, it's to mock him, and assure him that his own victory is inevitable. Much like Vin, Kelsier does realize that Ati is doing so partially because he is worried that Kelsier might find a way to oppose him; however, he still find Ati's words disturbing.[2]

When Kelsier returns with Ire's orb, Ati once again mocks him, suggesting that it was him who inspired Kelsier's quest in the first place. Kelsier tries to protect Vin from Ruin's influence, but even after taking up Preservation, he is unable to do that until the very end, when he passes the Shard's power onto her.[6][28] It's only after Vin uses said power to kill Ruin that Kelsier is able to pay Ati back for all the verbal abuse, by punching him hard enough to make the former Vessel fall to the ground.[20]

This page is probably complete!
This page contains most of the knowledge we have on the subject at this time.
It has yet to be reviewed.
Retrieved from "https://coppermind.net/wiki/Ati?&oldid=165000"
Categories: