“The ways of Wayne are mysterious and incomprehensible. What he giveth, he can draw back unto himself. And lo, let it be written and pondered. ”

Wayne is a Twinborn on Scadrial; a Slider and a Bloodmaker.

He is a friend and colleague of Waxillium Ladrian. He lived in the Roughs and worked with Wax to keep law and order. He traveled to Elendel to help investigate the Vanishers and attempted to convince Wax to return to the Roughs as a lawman. 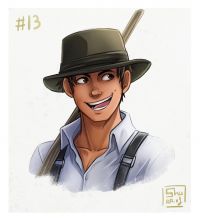 “Wax was a right good fellow, but there were a lot of things he didn't understand. Women for one. Hats for another ”

Wayne is of average height, lean and muscular, with a round, sharp-chinned face.[4][5] At the time of the hunt for the Vanishers he was about 30 years old.[6] He prefers to dress in Roughs clothing with a duster coat. He has an affinity for hats, which he says are essential to completing his elaborate disguises. He cannot grow a "proper" beard.[7]

He has an easygoing personality and is often seen manipulating his accent and style of speech depending on who he is with. He and Wax often exchange witty banter when together.

Wayne has little to no concept of boundaries and an almost pathological need to prove that he's not a bad person.[8] He is deeply troubled and has PTSD,[9] and did not cope well with the isolation he faced in the Roughs.[8] Wayne also has a problem with kleptomania. This is seen in his multiple episodes of "trading" items of different value and then making up convoluted reasons for why this "trade" is acceptable.[citation needed]

Wayne is both a Ferring and a Misting, making him a Twinborn. He is both a Bloodmaker and a Slider.

As a Bloodmaker, Wayne can store health in his goldminds at the price of being unwell. He can tap into his stores later to heal wounds. As long as Wayne has an adequate storage of health, he can recover from any wounds that aren't immediately lethal, such as curing poison, regrowing fingers, and surviving bullet wounds. He prefers to fill his metalminds all at once by spending weeks sick in bed instead of traveling around while slightly sick.[10]

As a Slider, Wayne can burn bendalloy to form a "speed bubble" around himself, speeding up time for anyone inside it.[1] Once the bubble is made it cannot be moved, and Wayne can move about freely inside it, but if he leaves it, it will disappear. Anything moving from one side to the other, like a bullet, will be slightly thrown off course by the edge of the bubble. Using one nugget of bendalloy Wayne can compress two minutes of time into approximately fifteen external seconds. Wayne often used speed bubbles to converse in private, change in to a disguise or engage in a fight uninterrupted.

Wayne's preferred method of fighting is to move in close to one opponent, create a speed bubble, and use his dueling canes for a close quarters one on one. After beating his opponent he will drop the bubble and leap to the next one, starting the process over again. He seems adept at fighting, even against men with guns, though he does get shot on occasion, making his healing abilities extremely useful during combat.[11]

Wayne is talented at disguising himself using various costumes and voices, and has been able to pose as various races, ages, and genders. He is a master at picking up accents and considers it the only thing he is allowed to steal. Even when living in the Roughs he made trips into the city for the purpose of picking up new accents. With the right hat and accent Wayne can easily disguise himself well enough to trick criminals or policemen into thinking he is one of them.[12][13] He is known to be a method actor often thinking like the person he is disguised as. MeLaan says that he is 'Wasted as a human' referring to his talent for accents.[14]

Wayne's father was a Feruchemist, and Wayne was aware of his abilities by the time he was 16, but never had access to any bendalloy or gold. Wayne had a natural talent for grabbing things without meaning to, and with encouragement from some friends he starting pick pocketing, and eventually robbed a man at gunpoint.[10] He accidentally killed the man, and was easily caught by the local lawman Jon Deadfinger. At the trial he found out that the man he killed had been a bookkeeper, charity worker, and father of three. Wax saved Wayne from being hanged, though the details of how are unknown. Ever since the two have worked together almost like a sheriff and deputy, becoming famous enough to be taught about in University. As a reaction to the death of the bookkeeper, Wayne is unable to hold a gun without his hands shaking, preferring to use dueling canes instead. He also sends half of the money he makes to the man's widow to help pay for her kids, one of whom was able to go to university. He visits Allriandre, the eldest child, at the University on the first day of every month to give her "blood money," but she has not forgiven him.[15]

During his time with Wax and other lawmen, Wayne established a notoriously bad relationship with Ranette, who would threaten to shoot him on sight. She seems to dislike his habit of "trading" things without asking, and does not appreciate the attentions he gives her, such as calling her honey or darling. Wayne ignored these objections for a very long time, until eventually giving her a notebook saying that he would stop showing so much affection. Soon after this interaction, he was found "snogging" MeLaan, a Kandra, during a gunfight.

Wayne saved MeLaan's life by recovering her spikes from Telsin, who had previously removed them. Haggard from grief due to MeLaan's predicament and the alleged death of Waxillium, Wayne used Wax's shotgun on Telsin, knowing that her gold metalminds would heal her. It is unclear if Wayne's surmounting of his gun-phobia was temporary or not.

This article is still missing information. Please help The Coppermind by expanding it.
Retrieved from "https://coppermind.net/wiki/Wayne?&oldid=143471"
Categories: