“As I have said many times before, I am aware of my reputation. I must embrace my nature. ”

Steris Harms is the daughter of Lord Jackstom Harms and the half-sister of Marasi Colms, as well as the fiancee and eventual wife of High Lord Waxillium Ladrian. Steris often states that she does not fit in well with other people, and she makes up for this by relentlessly memorizing social norms and relevant facts about Scadrian society and by creating exhaustive lists of contingencies for any and every possible occasion. She is on the autism spectrum.[2][3] 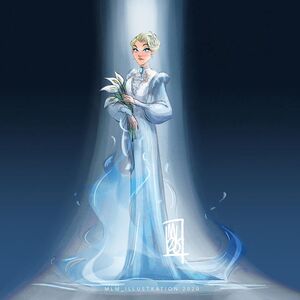 “I’ve learned to fake being normal, but lists of prepared comments and jokes can only take me so far. People can sense that I’m not being authentic - that I don’t like the things they like or think the way they do. ”

Steris has blond hair,[5] which is usually pulled up into a bun. She often wears a stern or cool expression. Steris carefully crafts her outfits so that she keeps up with the current fashions, neither ahead of or behind the curve.[6] As a result of her autism spectrum disorder (ASD), Steris often feels disconnected from those around her. She often describes herself as boring,[4] and mentions several times that others find it difficult to spend much time with her.[7] As a member of Wax’s close circle, Steris often feels as though she has nothing to contribute to their heroics. During the hunt for the Bands of Mourning, Steris gives herself a 7/100 usefulness rating.[8]

Steris copes with her disconnection by being as prepared and thorough as humanly possible. She always carries at least one notebook, in which she keeps multiple lists. Steris has compiled lists of witty comments to use during conversation,[9] unsavory people to invite to her wedding,[10] and on one occasion a twenty-seven page list of things to bring on a spontaneous trip.[11] Steris is known to prepare exhaustive plans and backup plans, and backup backup plans, and to pack in accordance with those plans, bringing extra steel or guns for Wax to use and on one occasion gouging a hiding place for a brass medallion out of her notebook.[12]

Steris is very intelligent and dedicated to what she views as her duties. She puts an enormous amount of effort into learning everything she can about the players and moving parts of Elendel society,[9] and takes her responsibilities as a head of House Ladrian very seriously, even to the point of reviewing the house finances in an effort to recover three missing clips.[11] Her dedication to and interest in what Wax views as meaningless and boring tasks inspires him to greater dedication to his own responsibilities as High Lord Ladrian.[13]

Steris is given to moments of deep reflection and poetic expression, as well as moments of surprising honesty.[14] She speaks formally most of the time, except with Wayne, whom she does not respect at all.

Steris was raised in Lord Harms household, with Lord and Lady Harms. Steris’s parents were not emotionally close. Lord Harms remarked that Steris is much like her mother.[6] Steris was aware of Lord Harms’s extra-marital affairs and views them as normal, to the point where she wrote a clause for affairs into her original marriage contract.[5]

Engagement to Wax and Capture by the Vanishers[edit]

“I did not make these rules. Nor do I approve of them; many are inconvenient. But it is the society in which we live. Therefore I make of myself something that can survive in this environment. ”

Steris makes a visit to the Ladrian mansion to discuss arranging an engagement between herself and Wax.[5] This was the first time Steris and Wax had met in person, although they had been exchanging letters regarding a house union for several months. Steris presented Wax with a “thorough” document of at least 20 pages that outlined each stage of their courtship and engagement, as well as the terms of their eventual marriage, an arrangement that Wax agreed to. It was here that Steris also met Wayne, in the guise of Wax’s fictional Uncle Maskil.

Steris and Wax attended the Yomen-Ostlin wedding dinner as a couple a few days after their first meeting.[6] As they entered the party, Steris educated Wax on how Elendel society revolved around gatherings like it, and how invitations were used almost as weapons. Steris also informed Wax that she would no longer respond negatively to his “ignorant frontiersman” act. Despite this statement, she did become frustrated with his coarse table talk and leave their group for a moment. As a result, she was in the bathroom when the Vanishers attacked the party. Steris and Marasi were the kidnapping targets of the attack,[15] and while Wax was able to rescue Marasi, Steris was ultimately taken.[16] Lord Harms was devastated at the loss of his only (legitimate) daughter, and offered to bankroll Wax’s efforts to recover her.[17] The next day, Wax coaxs Marasi into revealing that she and Steris are actually half-sisters, rather than cousins as they were first introduced.

Wax felt intensely guilty about failing to save Steris, and thus undertook an intense investigation into the Vanishers and their mysterious financial backers. As he finally confronted Miles Hundredlives, the leader of the Vanishers, Wax discovered Steris hidden a room of Miles’s lair.[18] He rescued her from the room and used his Feruchemical and Allomantic powers to collapse the building, an event which Steris appeared to find exhilarating. He then had Steris run from the scene to fetch the constables. After the fight was over and Miles was arrested Steris was interviewed about her experience by the constabulary, then offered Wax her thanks for his rescue.[19] She informed him that she “remained pure” after her captivity, and suggested that the pair advance the timeline for their relationship that had been laid out in her contract, an advance that would be facilitated by his dramatic rescue. Steris also informed Wax that she would no longer complain at his hobby of rushing around the city fighting crime, because they could each accept the other for who they were. For the first time, Steris shows a small amount of affection for Wax.

“This is how it’s going to be, with him, isn’t it? Always being left behind in the middle of something? Always half feeling as if I’m part of his life? ”

Steris goes on a cordial visit to Ladrian Mansion to do some wedding planning. Her main goal of the day is to decide who to invite to the wedding between her and Wax. Steris reveals that she has been reading the public records of Wax’s arrests in the Roughs in an effort to discover more about his life. They decide to invite Douglas Venture in an effort to control the chaos that Steris knows will inevitably appear at any major event in Wax’s life before Wax is ushered out the door by Wayne to chase down their latest prey, the Marksman. Before he leaves, Steris asks Wax to take care of Marasi.

Later that day, Wax accompanies Steris to see the governor speak at Lady ZoBell’s party.[14] On the way there, Wax tells Steris a story about his uncle from his childhood. When traffic clogs up, Wax uses Ranette’s new grappling hook to climb ZoBell Tower with Steris according to the plan in Steris’s notebook. During this climb Steris voices how wonderful she thinks it is to fly by allomancy, although Wax feels she is uncomfortable with the experience. During the party, Steris discards her usual plan for working the crowd in favor of Wax’s goal of finding Bleeder.[9] Steris evidences interest in the methods Wax uses to protect himself during a social occasion, and proves much better than he is at navigating, and ending, conversations. Steris also revealed that she had prepared a list of witty quips that she thought Wax would enjoy, prompting Wax to say that he thought she was being truly genuine with him even though she was working off a list. Steris and Wax encountered MeLaan in disguise before finally being able to speak with Governor Replar Innate. Steris defends Wax to the governor before being left behind when Bleeder begins to speak to Wax. After Wax chases Bleeder out of ZoBell tower Steris is left to make small talk with Wayne, who tells her that he finds her repulsive and indicates that he would rather be anywhere else than talk with her. Eventually, Marasi sends Steris off to wait in safety until Bleeder is captured.[20]

After Wax confronts Paalm and learns the truth about Lessie, he goes through a severe depressive episode.[21] During this time, Steris handled all of his affairs, from looking after the events of House Ladrian to making conversation and excuses to his visitors. After he recovers, Wax states that Steris gave him an invaluable gift by allowing him to cry and to grieve without requiring anything of him.

The Hunt for the Bands of Mourning[edit]

Steris accompanies Wax on a mission to recover the Bands of Mourning. At Lady Kelesina's party, she deliberately made herself projectile vomit all over her table to give them a believable excuse to leave.[expand] 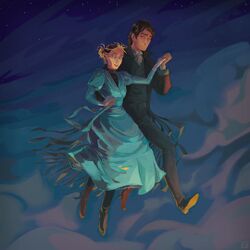 by clarinking
Wax and Steris flying in the mists

“8:17. Way into the building blocked by traffic. Lord Waxillium carries us up to the top floor by Allomancy, which is completely inappropriate and at the same time breathtaking. ”

Steris began her relationship with Wax with a touch of desperation, as her efforts to secure a future for herself and her house had come to a stalemate.[19] However, after Wax rescues her from her captivity by the Vanishers, she evidences some affection for him.[19] By the time Wax goes to search for the Bands of Mourning, Steris has fallen deeply in love with him,[22] even though she regards the emotion as foolish.

At the beginning of their relationship, Wax regards Steris as an inconvenient necessity, and even enjoys needling her until she loses her temper. As their relationship progresses, however, Wax finds himself becoming protective of Steris’s feelings as well as her person.[4] Eventually Wax realizes that he not only cares for Steris, but that he loves her. Since their first wedding was ruined by Wayne, Wax surprises Steris with a private wedding after their return from the Seran Mountain Range, delighting her with the one thing she had never expected - a marriage marked more by love than by duty.

Steris has a close, but complicated, relationship with her father. When she was kidnapped by the Vanishers, Lord Harms was devastated[16], and offered to bankroll Wax’s efforts to find her.[17] Lord Harms loves his sole legitimate daughter deeply, and even allows her to bully him into various activities.

This article is still missing information. Please help The Coppermind by expanding it.
Retrieved from "https://coppermind.net/wiki/?title=Steris_Harms&oldid=142968"
Categories: