Edwarn Ladrian also known as Mister Suit, is the uncle of Waxillium Ladrian, a member of high society in Elendel and a high ranked member of the Set. 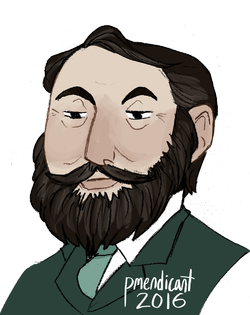 Edwarn Ladrian is a round-faced, stocky man distinguished by a short, precisely trimmed beard, a beautifully tailored suit, and a cravat so narrow and thin, it lay flat like a bowtie loosened at the end of a long night.[2]

He is usually wearing an extremely stylish and expensive suit of black silk with a turquoise vest.[3] He also uses a whale-ivory cane.[4] He doesn’t like the smell of cigars.[3] Edwarn was very invested on the fortune of his house and had kept very good track of what his competitor houses had been shipping,[5] still he ended up spending it to fund the Set.[6] He is a follower of Trellism, a claim is made that he will deliver information to Wax in relation to these beliefs, after which Ironeyes delivers a book for Wax. When the red eyed Faceless Immortal comes to him he makes a claim stating that he will follow Trell.

He is a Hemalurgist with three spikes, granting him the power of a coinshot,[7] a bloodmaker,[8] and a leecher[9] respectively, due to the fact that having four or more Hemalurgic spikes would make one susceptible to Harmony's complete control.

Edwarn was Wax's uncle, a descendant of Breeze and Allrianne, and was the fifteenth High Lord of House Ladrian.[5]

Before Edwarn faked his death, it was widely believed that he had wasted the family fortune through poor business deals while earning a meager sum betting on horse races.[5] He was remembered as hermit-like save for his letters to the broadsheets about political matters,[4] and had offended three-quarters of the city’s upper crust.[10]

It was later revealed he had prepared Hinston to take over the Ladrians’ house, but owing to an unfortunate disease that resulted in his death, Edwarn had to resort to Wax instead. He also confirmed that he was secretly transferring funds into the Set's bank account in preparation for his fake death and subsequent new life.[6]

He managed to doom House Tekiel. By funding the Vanishers in their robberies, the house owed payments on too many high-profile losses. These attacks, and the insurance claims, devastated them and their financial integrity. Company shareholders had been selling their stakes for pennies.[6]

Edwarn and the Set wanted to breed Allomancers. He hired Miles and the Vanishers to capture women with correct powers to do so.[6] Both Steris and Marasi[11] were on his list, and when the former was captured, Wax took it upon himself to find her.[12]

Wax figured out he was alive and under the alias of “Mr Suit”, Miles' employer. He also decoded Miles' notes which tracked his moves. He found his uncle, but had to let him go, as he had his sister captive.[6]

Edwarn was later confirmed to be looking to start a rebellion in Elendel, creating chaos and profiting from it. Along with the Set he was developing higher technology that was still kept secret from the rest of the population; they were probably using it to create Allomancers, as there was not time for breeding.[13]

Edwarn was also looking for a weapon in the south, so he trekked to the temple housing them. He tried to negotiate with Wax to help get them and almost managed to kill him by using his sister Telsin as a mole who shot him.[7]

As Wax got the Bands' power and recovered, he confronted his uncle who was quick to arm a bomb in an airship and managed a duel. Eventually Wax beat Edwarn, leaving him tied to the top of the temple’s Lord Ruler’s spear.[14]

Later, a Faceless Immortal with glowing red eyes visited him in prison and was impressed that he didn't give away any information. It then killed Edwarn and itself with an explosion just after stating: “You will be allowed to serve in another Realm.”[1]

As Wax's uncle, Edwarn understands his nephew very much to the point of nearly predicting his every movements.[15] He had overseen Wax´s education, grooming him specifically as heir to the house.[16] Because Hinston dies, he searches for Wax to take over his fortune and estate after his death, hoping he has overcome his sense of morality.[6] This is not the case, and though he resisted killing him in the beginning he later asked his butler Tillaume kill Wax.[12] He survives and understood that for someone who had been loyal to the family for so long, the only reason he could be so eager to kill him was that he was following his former master. This is how Wax finds out his uncle is still alive.[6]

Edwarn is Telsin's uncle, and they both faked their death in the same carriage accident.[5] She is a member of the Set and had him join. She outranks him, and can give him orders.[17]

“Money is meaningless; Only expectation has value as currency ”

—Edwarn to Wax on how to run business[18]

“The day of mighty men to be worshiped has gone, and with its passing goes the right of Allomancers to power ”

—Edwarn to Wax before the latter dies[8]

This article is still missing information. Please help The Coppermind by expanding it.
Retrieved from "https://coppermind.net/wiki/?title=Edwarn_Ladrian&oldid=169497"
Categories: