“I'm not part of your little troop of deputies, Wax. Leave me out of this. ”

Ranette is a gunsmith on Scadrial who makes many of the guns used by Wax. She shelters them and inspects one of the Vanishers' aluminum pistols. She identifies it as being made by Nouxil.[1]

She lived in the Roughs but moved to the city some time before Wax did due to the use of electricity in the city, despite disliking Elendel and feeling unsafe there. Her home is located in the Third Octant. It is a red brick house and has two stories.[1][2][3] 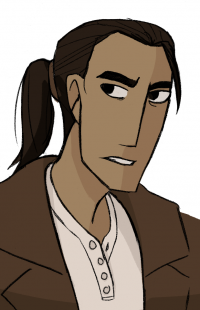 “People are stupid. I find them annoying, and those are the ones I like. ”

Ranette is tall, long-legged, and lean, with dark hair which she wears in a shoulder-length ponytail. While Wax, Wayne and Marasi are staying in her house, she wears boots, brown trousers, a white laced shirt and a long Roughs-style leather coat.[1][5]

Ranette is quick to threaten to shoot people who annoy her -- as well as Wax and particularly Wayne -- but she doesn't shoot anyone she allows inside her home. She keeps a shotgun in a basket next to her front door.[1][6] Though she excels at gunsmithing, she prefers to keep to herself and doesn't want to be bothered by people. As such, she doesn't sell or patent her inventions. She also hates people sensing her Allomancy and hires Smokers to cover her house.[1] She values guns greatly, willing to forgive Wax and Wayne in exchange for an interesting weapon. Upon losing Vindication, Wax believes that Ranette will be furious with him for it.[1][7]

Ranette is a lesbian, and has been out for two decades.[8][9] She was previously romantically involved with Misra,[6][10] but is now with Jaxy, who she affectionately nicknames "Jax."[11]

Ranette seems to only use her abilities as a Lurcher for simple convenience (i.e., pulling items out of reach toward her, et cetera) and to use devices of her own creation that only a Lurcher can use.

As a gunsmith, Ranette is highly skilled and is responsible for the creation of numerous guns as well as various other contraptions and innovations. She has a symbol that can be used to identify her work.[12] She can competently identify a gun's creator. 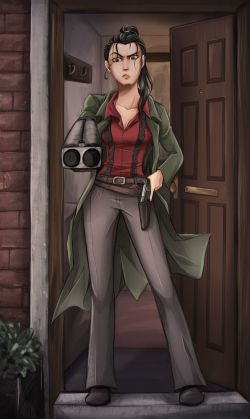 by Shuravf
Ranette pointing a gun at Wax and Wayne when they try to enter her home.

Ranette moved to Elendel sometime before Waxillium's return due to the city providing access to electricity which the Roughs lacked. She has her workshop in the Third Octant.[3]

Wax, Wayne, and Marasi visit Ranette after Wax's study gets destroyed in an explosion. At first, she tries to chase them away by pointing a shotgun at them but decides to let them in after Wayne offers her the aluminum gun Wax had taken from the Vanishers. Once inside, Ranette starts working on pulling apart the gun and discovers it was made by a gunsmith called Nouxil, with whom she had been corresponding until his disappearance a year ago.[1] Wax explains Ranette his need of a new gun but she refuses to give him anything. Wax then proceeds to explain how Miles Hundredlives has been trying to kill him and his companions. Ranette has a hard time believing Miles would do that, but decides to lend Wax Vindication and hazekiller rounds for field testing after she hears Miles has been taking hostages whose lives are now in danger. She also lets Wax use a room in her house for planning and lends Marasi a rifle and a pair of trousers.[1]

Ranette sends Wax new equipment for testing purposes. The equipment package contains the first version of a grappling hook invention she wants him to experiment with while jumping with Allomancy. [13]

Wax sends Ranette a note via an errand boy asking her to make him a special bullet to take down a kandra named Bleeder. Within hours Ranette arrives to Governor Replar Innate's mansion to deliver the special bullet she made out of Wax's Pathian earring. She hands the bullet over to Wayne who later gives it to Wax. Ranette talks about the current situation of things with Wayne and seems very worried about the people gathering outside which makes Wayne go check things out and Ranette leaves. [6]

Ranette is returning home after delivering Wax's new cords when she sees Wayne near her new residence where she had moved a few months ago. She notices the notebook Wayne had left at her door and demands him to explain. After Wayne's initial explanation she flips through the notebook and reads the words Wayne had written on the last page. She figures out he is finally giving up on the wish of dating her and moving on. Ranette smiles and thanks him. Wayne tries his luck one more time by asking Ranette about her girlfriend but she firmly rejects him again so he finally leaves. [14] 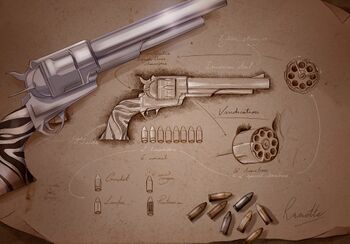 “I need you to stick your head in a bucket of water and slowly count to a thousand! ”

—Ranette to Wax when he tries to request her help.[1]

“Fine. But if Wayne touches anything -anything- I'll blow off the offending fingers. ”

—Ranette after letting Wax, Wayne, and Marasi into her workshop.[1]

This article is still missing information. Please help The Coppermind by expanding it.
Retrieved from "https://coppermind.net/wiki/Ranette?&oldid=170642"
Categories: