Marsh is a half-skaa Seeker from the Final Empire on Scadrial. 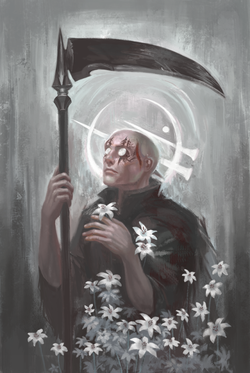 After the Catacendre, Marsh is happier and in a better state mentally than he was previously. Although he won't admit it, there's a part of him—a part that's similar to Kelsier—that enjoys being seen as a god of death.[6]

Marsh was a Seeker, a Misting who could burn bronze. This allowed him to hear Allomantic pulses and find Allomancers. He was highly skilled and taught Vin how to use bronze effectively.

Upon becoming an Inquisitor, he gained further abilities in Allomancy and Feruchemy through the use of Hemalurgic spikes. He initially had eleven spikes. Some of the spikes granted Marsh the abilities of Allomantic steel,[7] iron,[8] pewter,[9] tin,[10] brass,[11] zinc,[12], copper, bronze and atium,[13] as well as granting him the abilities of Feruchemical gold[14]. His spike for Allomantic bronze, coupled with his natural ability as a Seeker, lets him pierce standard copperclouds.[15] After Ruin took control of the Inquisitors he gained ten more spikes, giving him twenty-one in total.[16][17] His new powers included Allomantic duralumin,[18] and Feruchemical pewter,[11] steel,[10] and atium.[19]

His multiple atium abilities allow him to extend his life as Rashek had.[20] In addition to this, he kept the bag of atium that KanPaar attempted to sell, meaning that he has enough to stay alive for a very long time.[21][22][23]

Like his brother, Kelsier, Marsh hated injustice. As a result, he led the skaa rebellion for many years. However, the two brothers did not get along. While Marsh was busy trying to overthrow the Lord Ruler, Kelsier led a band of thieves - and was wildly successful at it.[3] Though she would come to marry Kelsier, Marsh had also loved Mare, which only further increased the division between the brothers.[24] When Mare and Kelsier failed during a heist of Kredik Shaw, they were sent to the Pits of Hathsin, ultimately costing Mare her life.[25] It was the final nail in the coffin for Marsh. He gave up the rebellion, unable to deal with the deaths of those he cared about, considering the whole endeavor dangerous and futile.[24] 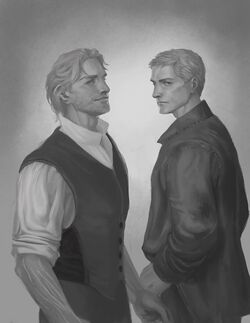 by eyeronis
Marsh with Kelsier

When Kelsier Snapped, becoming Mistborn, and escaped the Pits, he returned to his old thieving crew with plans to help the current Rebellion, under the leadership of Yeden.[26] His new plot to overthrow the Lord Ruler only served to get under Marsh's skin yet again, and he doubted the veracity of Kelsier's intentions, thinking it was still all just a game to him. But despite it all, the brothers still loved one another and Marsh eventually agreed to help infiltrate the Steel Ministry, hoping his abilities as a Seeker would smooth his way in. Marsh continued to feel like he had been a failure compared to his brother and was determined to finally make a difference.[27]

Placing himself within a batch of new Ministry recruits flowing into Luthadel, he was accepted into their ranks. He quickly began to reveal important Ministry secrets to the rebellion using secret messages and drop sites. One such secret was the soothing stations, positioned by the Lord Ruler across Luthadel to inspire depression and docility in the skaa population.[28]

However, not everything went as planned. Marsh set up a meeting at a site he was supposed to inspect for suitability as a soothing station. However, when the crew arrived, they discovered only a headless corpse, butchered by Inquisitors, and assumed Marsh dead.[29] They found a chair leg with a hidden message inside from Marsh, indicating that his questions about the Inquisitors had potentially exposed him, as they had been watching him, following him, and asking about him.

It was later revealed that he had been watched by the Canton of Inquisition, as Seekers were particularly desired, and they had 'recruited' him, turning him into an Inquisitor using Hemalurgy. This caused his innate Seeker abilities to be heightened even further, an ability which was of great use to the Inquisitors. It's quite likely that this allowed Marsh to pierce copperclouds, similar to Vin's earring. Despite it all, he continued to aid the rebellion behind the scenes, and when Vin confronted the Lord Ruler following Kelsier's death, he quietly removed the linchpin spikes from all of the other Inquisitors in Luthadel, most of which had gone to recuperate and refill their goldminds. Without the support of his Inquisitors, Vin was able to focus and finally succeed in killing the Lord Ruler.[30]

Following the downfall of the Final Empire and the beginning of Elend's rule in Luthadel, Marsh would lead Sazed to the Conventical of Seran, though he exhibited strange behavior, unlike the Marsh of old.[31] Doing so allowed Sazed to discover Kwaan's inscription, but Marsh prevented him from translating it on the spot and instead forced him to make a rubbing, fleeing the Conventical, after which he promptly disappeared.[32] Left to his own devices, Sazed was motivated to bring his discovery back to Luthadel for research.[33] However, it is likely that Marsh was already under Ruin's influence, forcing Sazed to make a copy of the metal inscription so that Ruin could alter its message without anyone realizing it had been changed.

Following the Siege of Luthadel, when Sazed finally realized there was a problem, Ruin again brought Marsh, who was more and more aware that his actions were not his own, to distract Sazed and prevent him from warning Vin about giving up the power at the Well of Ascension. It's implied that Ruin had been causing Marsh to commit atrocities across the Final Empire.[7] 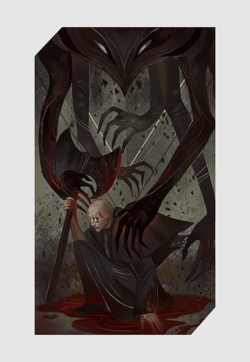 After Ruin was freed from the Well, it took total control of Marsh. During this time he had no physical control over his body. In the horrifying prison of his mind, he held out hope that he could remove a crucial spike and end his life when Ruin's attention was diverted.[34] However, he was never able to accomplish much more than twitching a finger before Ruin asserted total control and brought him back in line. As Ruin was undoubtedly aware of Marsh's continuing resistance, though it could not read his thoughts, Marsh was implanted with many additional Hermalurgic spikes, further increasing Ruin's hold over him. As a result, of all the Inquisitors, he had the most Allomantic and Feruchemical abilities.[35]

For most of his existence under Ruin, he was unable to aid Vin and Elend in any way, allowing his mind to drift into the insanity of Ruin, where destruction turned to bliss, giving his last vestige of rebellion the relief it needed to stay alive in the dark corners of his mind.[9][10] This last burst of Marsh's incredible willpower finally emerged during Vin's battle against the Inquisitors at Kredik Shaw. With the support of Kelsier, directing Preservation's power to distract Ruin and bolstering Marsh's ability to resist, he ripped out Vin's earring.[36][35] This allowed the mists, and the full power of Preservation, to flow into her, saving her life, allowing her to destroy all of the remaining Inquisitors, and Ascending to become the Vessel of Preservation. Only Marsh survived the onslaught by a stroke of luck: as the empowered Vin was about to remove his second head spike, she Ascended beyond her physical form.[37]

Ruin reasserted his control, eventually sending Marsh to the Battle of Hathsin, where he would behead an exhausted Elend in Ruin's rage - who had burned through all of his metals, including the secret atium stash within the Trustwarren. However, this act took the only thing Vin had to live for, so she then sacrificed her life in order to destroy Ruin's Vessel and prompt the Catacendre.[13]

Marsh and his nickname, "Ironeyes", survived the events of the Catacendre. He has become a mythical figure in Elendel's popular culture, being the personification of Death.[12] He is also the focus of Sliverism.[38] Though likely given far more autonomy under the direction of Harmony, he continues to serve as one of his agents.

He delivered a book to Wax through Marasi that contained information about Hemalurgy, using emotional Allomancy to make her curious enough to follow him.[12]

He has been investigating the Southern Continent of Scadrial.[39]

This article is still missing information. Please help The Coppermind by expanding it.
Retrieved from "https://coppermind.net/wiki/Marsh?&oldid=167255"
Categories: