A gemheart is a gemstone found in many native animal species on Roshar, including the sapient species called singers.

Gemhearts form naturally within some of Roshar's organisms. The crem that falls with Rosharan rains is full of minerals, which the creatures absorb by drinking and then use to grow the gemheart.[1] Their formation is also influenced by Investiture leaking into the anatomy of certain Rosharan species, creating an effect similar to the formation of atium on Scadrial.[2] Creatures with gemhearts still have normal hearts.[3]

Like any gemstone that is one of the ten Polestones, gemhearts can glow with either Stormlight or Voidlight, suggesting that an animal's gemheart is the thing that enables the types of Investiture that many such animals utilize, usually involving a spren bond. A singer's gemheart, for example, contains the spren that gives them their current form, which varies depending on the type of spren they bond.[4]

Humans on Roshar, even Surgebinders with spren bonds, do not have gemhearts[5], but those who swallow Yelig-nar have been known to undergo several physical transformations, including having their heart and lungs replaced with a large Voidlight-filled amethyst that has been described as a "gemstone heart".[6] It is uncertain whether this can be considered a gemheart or not, but its nature is similar in that it is a gemstone created through Investiture and it functions as a vital part of the transformed human, who would not survive if it is destroyed.

Venli utilizing Envoyform, advises new singers that if they don't "want" the new power offered, it won't be able to take place in their gemheart[4]

The gemhearts of singers are considered sacred and personal.[9]

It is possible for singers to hold more than one spren in their gemhearts simultaneously, including both Radiant and Voidspren.[6] 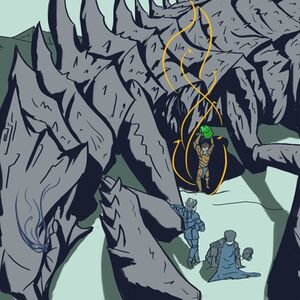 Just as Soulcasters are considered valuable by the people on Roshar, so are the Polestones that enable their function. Because much of the land on the continent has been covered by crem, mining is more difficult compared to other planets, and so most gemstones that people use are from gemhearts, which are harvested from various animals.

Some species have gemhearts that are of just one gemstone type, while others vary. Species that only have one type of gemheart are considered more ideal for harvesting.[10]

Gumfrems, small chull-like animals, are raised by some farmers in Alethkar for their small heliodor gemhearts that can be harvested and used to Soulcast meat.[11]

Chasmfiends have emerald gemhearts. The ability to Soulcast grain from them, combined with their relatively large size, makes chasmfiend gemhearts extremely valuable. Because chasmfiends are aggressive and extremely dangerous greatshells that cannot be domesticated, humans resort to hunting for their chrysalises on the Shattered Plains most of the time.

The discovery of chasmfiends containing such valuable gemhearts completely altered the War of Reckoning. Attempting to directly attack the Parshendi base, located far into the Shattered Plains, was risky and expensive. However, when a chasmfiend climbed onto a plateau to pupate, the highprinces and Parshendi alike would extend themselves to attempt to retrieve the gemheart of the resulting chrysalis. The highprinces all agreed that these periodic clashes suitably upheld the Vengeance Pact, and the War of Reckoning effectively devolved into little more than a decade-long competition.

During the War of Reckoning, Highprince Roion was the one who captured the fewest gemhearts.

The hunting for chasmfiends to gain gemhearts will harm Roshar's ecology in the long run.[12] The extinction or near-extinction of a greatshell species due to excessive hunting has happened before, as in the case of the lanceryn. In the case of the chasmfiends, the sudden drop in the number of juveniles that reach maturity, due to the hunting of chrysalises, have led to fewer chrysalises appearing over time. This is because the chrysalises are being hunted almost at a faster rate than the chasmfiend population could recover from given their slow growth and slow reproduction rate.[13]

This article is still missing information. Please help The Coppermind by expanding it.
Retrieved from "https://coppermind.net/wiki/Gemheart?&oldid=166601"
Categories: