Bavadin is the original and current Vessel of the Shard Autonomy.[2][3] She is the only Shard of Taldain, where she's invested in one of the local suns.[4][5][6]

by More Cynical Than Funny

Though she herself is female, Bavadin has a habit of taking on multiple forms and appearances. She has several male and female personas, and will often present herself as different people to the same culture; race, gender and other qualities are fluid where she is concerned.[7] Bavadin seems fond of changing her appearance, and she does so daily.[8] Even her original species is unclear; she is not a dragon,[9] but it's unknown whether she's human or Sho Del.[10]

Bavadin's interpretation of Autonomy lends itself to strict isolationism; she forbids travel to and from Taldain, to the detriment of worldhoppers from that planet. However, she is willing to meddle in the affairs of other worlds.[5][11] She is fond of creating avatars, sapient entities which hold a portion of Autonomy's power but are independent of her.[12] Their personalities are carefully shaped by Bavadin. At least one of them is haughty and self-assured, although it seems it is not a trait shared by all others, and thus it's unclear if Bavadin herself is like this.[13] 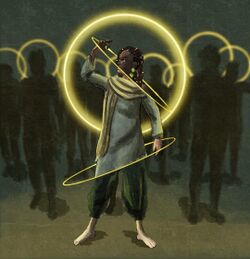 Bavadin is a Vessel of a Shard, making her ageless, incorporeal and incredibly powerful. Whether Autonomy grants her any unique strengths or abilities is unknown, though she has the capability to bar people from accessing Taldain through the Cognitive Realm.[5] She seems to be a skilled and keen actor, capable of assuming dozens of made-up personas; there are entire pantheons of gods where every deity is actually Bavadin in a different disguise.[7]

Like all original Vessels, Bavadin came from Yolen.[14] She and a number of others killed the creator-god, Adonalsium, and split up his power into sixteen pieces.[15] Bavadin herself picked up the piece which became Autonomy and departed Yolen, eventually winding up in Taldain, where she Invested herself in the local sun.[5]

“You must know better than to approach us by relying upon presumption of past relationship. ”

Bavadin seems to have had some alliance with Rayse, the prior Vessel of Odium, although whether this alliance still stands with Taravangian, Odium's new vessel, is unclear. She assisted Rayse in splintering the shards of Devotion and Dominion, though the extent and nature of this assistance is unknown.[17] Hoid holds a deep grudge against both Bavadin and Rayse, for unknown, but related reasons.[18] Bavadin herself doesn't seem to be overly fond of Hoid either, though they two have had a prior relationship of some nature.[16] In the present, her avatars deeply dislike Hoid, and at least one of them -- the Obrodai avatar -- has been instilled with deep dislike of him as a precaution.[19]

This page is probably complete!
This page contains most of the knowledge we have on the subject at this time.
It has yet to be reviewed.
Retrieved from "https://coppermind.net/wiki/Bavadin?&oldid=165419"
Categories: