“I know pain. I am the only god who does. The only one who cares. ”

Rayse was the first Vessel of the Shard Odium.[5] 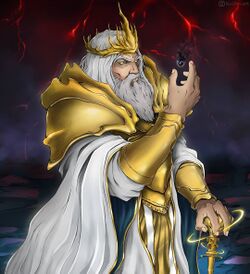 While Odium’s true essence is too powerful to be seen, Rayse generally presents himself as an old man with a wide, furrowed face and bone-white hair sweeping back from his head, and thick mustaches with a hint of black in them blended into a short white beard. His skin and eyes look Shin and he wears a golden crown in his powdery hair.[6] To the singers, on the other hand, he appears as an ancient singer with gold and white marbled skin.[7] He carries a golden sceptre in both of these forms.

“Rayse... was among the most loathsome, crafty, and dangerous individuals I had ever met. ”

Prior to Ascension, Rayse was already thought of as cunning and ambitious. He picked his Shard very deliberately, believing that it matches him perfectly, and desires nothing less than to be the sole god of the cosmere.[10][11] To this end, he seeks to destroy any other Shard, primarily those capable of rivaling or threatening him. To protect himself from a counterattack by other Shards, he picks the targets that he can claim have broken the rules that all the Vessels had previously agreed on.[12] This being said, he's not opposed to cooperating with his fellow Vessels if it suits him.[13]

He can be extremely cunning. He will often present himself as grandfatherly and friendly, a helping hand rather than a wicked overlord. He will carry this facade for a long time, even if whoever's talking to him is keenly aware of his real nature. He will praise his interlocutor effusively, attempting to present himself as a reasonable ally.[8][7][14] On the other hand, when things do not go his way, the facade drops, and he's quick to reassert a position of dominance, growing callous and threatening.[15][16] If it turns out the situation is beyond his ability to control, he'll flee to regroup and try another day.[17]

While careful and subtle, Rayse is also an arrogant man. He can be lonely with nobody to share his accomplishments and likes to show off and enjoys being worshipped.[18][19] This can be seen when he pulls people into a vision, presenting himself with a powerful, dominating figure while this is not really necessary.

Rayse is a Vessel of a Shard, with all the abilities this entails, including the power to create a magic system by Investing into a world, and functional immortality.

Apart from the magic systems his Shard fuels, Rayse is capable of perceiving the future. How good he is at it is uncertain; while his abilities exceed that of Honor or Taravangian's Diagram, he still has blind spots, mostly pertaining to other seers, and he can be wrong.[15][17] He's also able to corrupt and subvert the Investiture of others, and force a connection to himself, though the latter requires a proper mental state in the recipient.[20][7]

Unlike Ati, Rayse is unable to use Odium to alter text documents.[21] This is because unlike Scadrial, which was created partly with Ruin's own power, Roshar was not suffused with Odium's Investiture.[22]

Rayse knows how to kill and splinter other Shards without getting killed or splintered himself. It is unclear whether Odium has some unique skill or attribute enhancing his ability to do this or whether all Shards are capable of these actions, given the right motivation.

Rayse had once been a human from the planet Yolen.[23][24] He participated in the Shattering of Adonalsium along with fifteen other people, and chose the Shard of Odium for himself.[25][10] Afterwards, much like the other Shards, he departed the planet. While his Shard was interpreted as Odium from the very beginning, it's uncertain if the murder spree he would subsequently go on was his plan from the get-go.[26]

For the subsequent events, see Odium#History.

“Tell me you've never found yourself in conflict with someone you respect. Tell me you’ve never killed a man because you had to, even if—in a better world—he shouldn’t deserve it? ”

The relation between Rayse and Tanavast is difficult to determine, moreso for the fact that Rayse is the only source of information on it. On one hand, Rayse claims to sincerely respect him as a person, and claims that in a better world, Tanavast needn't have died. On the other hand, he also claims that Tanavast was heartless, caring for bonds and oaths more than the people behind them.[8] Tanavast's opinion of Rayse is unknown, but he was clearly wary, as he deliberately constructed their confrontation in a way that would allow him to bind Rayse to Braize.[27]

“Cephandrius. Ever the rat. No matter where I go, there he is, scratching in the wall. Burrowing into my strongholds. He could have been a god, yet he insists on living in the dirt. ”

Rayse and Hoid were friends, once.[29] However, at some point the relationship between the two of them soured significantly, leaving Hoid with a deep grudge that would last for thousands of years.[30] Hoid seems to have a long history of conspiring and working against Rayse, and they bear deep hatred towards each other.[28] Presently, Rayse is one of the few people in the cosmere Hoid is terrified of, and though he initially came to Roshar chasing after Rayse, he now wants to avoid him as best as he can.[31][32][33] Moreover, he's attempting to muster support among other Shards, as well as Frost, to help deal with Odium. His efforts have not yielded much success.

Rayse seems to be aware of Hoid's presence on Roshar; at the very least, he knows that Hoid will attempt to stop him. However, he doesn't consider this to be a significant problem, believing that he can outsmart him.[34] This does not mean he ignores him, as Hoid ponders while sneaking around in an occupied Kholinar that if Rayse knew where he was, Rayse would not hesitate to level the city.[35] 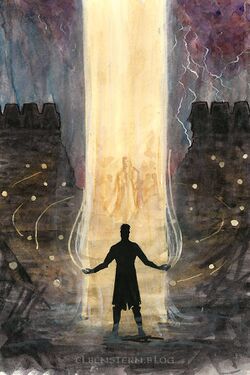 by Wanda Sonnemann
Dalinar facing off with Rayse

“Don't blame yourself. I made you kill her, Dalinar. I caused all of this. Do you remember? ”

Rayse has been grooming Dalinar to be his champion from a young age. During the war of Alethi unification, Odium provided him with the Thrill, and he claims to be the influence behind Dalinar's most gruesome atrocities, including the burning of the Rift. His goal is to make Dalinar feel such overwhelming guilt that he would give Rayse his pain, willingly joining his cause.[14] When Cultivation wiped Dalinar's memories, Rayse's plan became to return them all to Dalinar at once, for the greatest possible impact.[36]

By the time of the True Desolation, Rayse is confident in his ability to pull Dalinar over to his side when the time comes. He puts on a warm and caring facade, acting as though he's Dalinar's friend while at the same time underscoring just how thoroughly his Dalinar is.[8][4] Likewise, at the Battle of Thaylen Field he's similarly friendly as he offers Dalinar an out from his overwhelming feelings of guilt, even as Dalinar attempts to deny him.[14]

What Rayse doesn't expect is that Cultivation has arranged for Dalinar to recover his memories beforehand, giving him time to work through them and greatly dulling the impact Rayse's sudden influx of memories has on Dalinar.[14] This allows Dalinar to reject Rayse's offer. Rayse is first stunned, and then terrified as Dalinar not only defies him, but progresses on the path of a Bondsmith and summons Honor's Perpendicularity. He flees, fearing that if they met face to face again, Dalinar could push him into a contest in which Rayse's victory wouldn't be certain.[17][15]

This article is still missing information. Please help The Coppermind by expanding it.
Retrieved from "https://coppermind.net/wiki/Rayse?&oldid=163633"
Categories: