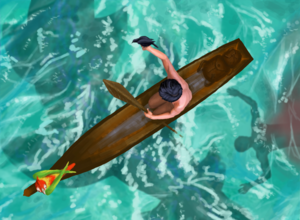 Upon reaching the fort, Dusk and Vathi found out that the machine had never been activated at all. Despite Dusk's ineptly-worded protests that something was still wrong, Vathi left him and entered the fort. In the throes of despair and anger, Dusk raged against Patji as he made his way back to his safecamp, despairing the oncoming loss of his world. Sak then flew away, leading him back to a terrified Vathi who had also realized the truth; the machine was a trap. Just as Dusk left Aviar mating plumes to lead rival trappers to their demise, so the Ones Above were deliberately leaving seeds of their technology for the mainlanders in hopes of artificially speeding up their technological progress in order to make it legal for them to trade with First of the Sun's inhabitants and exploit the entire planet.[1]

This page is probably complete!
This page contains most of the knowledge we have on the subject at this time.
It has yet to be reviewed.
Retrieved from "https://coppermind.net/wiki/?title=Sixth_of_the_Dusk_(character)&oldid=164969"
Categories: