For the avatar of Autonomy, see Patji (being).

Patji, The Father, is the largest island in the Pantheon.

It is located in the center of the archipelago.[1]

The island is one of the most difficult of the Pantheon to gain access to. Its coast is mostly cliffs and dangerous rocky beaches and, like most of the islands, Patji is covered in jungle. In the center of the island, surrounded by a caldera, is a lake called Patji's Eye. Patji's Eye is a lake with a green tint, this lake has similar investiture to a Perpendicularity but on a very reduced scale.[2][3] 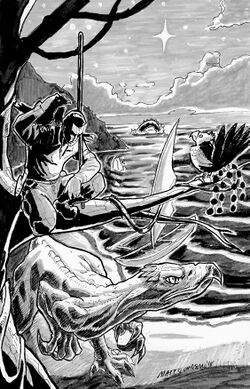 by Matthew Johnson
Sixth on Patji

The island is blanketed in dense jungle. Many of the most violent land animals on the planet are native to Patji. Most of the plant and animal life on the island have a cognitive ability that allows them to sense, or even communicate with, humans and other animals.

Aviar are birds that were originally thought to have innate magical powers. Later it was found that their abilities actually come from the parasitic worms that the Aviar ate from the fruit of the Patji's Finger

Patji's Fingers
A flowering tree, the blossoms projects the thoughts of a wounded animal to attract a group of predators who then kill themselves to fertilize the tree.

Patji's Eye is home to a parasite which infects the wildlife and causes the cognitive abilities.

Nightmaws Large bird-like predators that tend to hunt in the night and screech when hunting. They hunt by sensing cognition or the mind of the prey, similar to other animals on Patji and also have great sense of smell. Their sight and hearing, however, are next to none.

Dusk chose Patji as the island on which he would exclusively trap, and set up a number of safecamps around the island. He bred Aviar to sell on the homeisles and the mainland. At some point he also bred a mainland chick, Sak, on the island, and she gained a cognitive talent similar to the Aviar: the ability to predict the death of her companion, communicating this prediction by projecting a vision of their corpse into their field of view.

This article is still missing information. Please help The Coppermind by expanding it.
Retrieved from "https://coppermind.net/wiki/?title=Patji_(island)&oldid=149115"
Categories: