“What are you hoping to accomplish? Your kind betrayed us. Go find a human to bother. ”

Timbre is a lightspren from Roshar who has bonded Venli.[2]

Her real name is unknown; "Timbre" is a nickname given to her by Venli.[3]

In the Physical Realm, Timbre appears as a ball of light that trails a comet-like white streak when it moves around.[4] She's curious and adventurous, venturing out into dangerous situations; however, she's also scared of the Everstorm and hides in the shadows when it arrives. She's determined in her pursuit of a bond with Venli, and often serves as a calming influence on the singer, pulsing to the Rhythm of Peace to push Odium's influence away.[3] 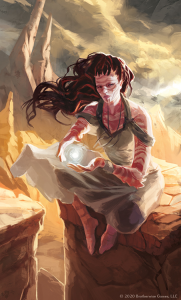 Timbre has shown the ability to reside within Venli's gemheart and capture other spren residing there.[2] Doing so allows Venli to enter and exit forms of power granted by voidspren at will.[5] It is unclear by what means Timbre does so.

Unlike other Radiant spren, Timbre has shown no ability to speak. Rather, she communicates through pulsing to certain Rhythms, which produces audible vibrations.[6] Venli has been shown several times to gather more information from Timbre's pulsing than simply her mood; it appears as though there is more communication going on between the two.[3]

She has formed a Nahel Bond with Venli, a singer -- something previously thought impossible.[5] Ordinarily, the bond should grant Venli the powers of a Willshaper, letting her use Stormlight to heal and power Surges of Transportation and Cohesion;[7] while Venli has shown the ability to breathe in Stormlight, it's uncertain if and how her species will change any other aspect of the bond.[5]

Timbre's grandfather was one of the spren who had bonded the Knights Radiant in the past; however, he was killed, along with many thousand others, in the Recreance. Despite that, in the late Era of Solitude Timbre decided to cross over into the Physical Realm and form a Nahel Bond, although, taught by that example, she decided to attempt a bond with a singer rather than a human.[5]

Her first target was Eshonai, and shortly before the arrival of the Everstorm, Timbre began trying to bond with her. She made little headway, as Eshonai was in stormform at the time and found Timbre's presence annoying. Still, the spren continued to try.[8] 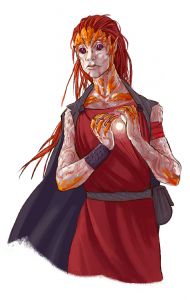 After Eshonai's death, Timbre remained with her corpse until it was found by a search party led by Ulim. Venli, one of the members of the group, saw Timbre after stripping off Eshonai's Shardplate, and tried to shoo her away.[4] Timbre, however, was not to be so easily dismissed; she followed Venli and accompanied her as the latter took on the envoyform. When Venli noticed Timbre's presence there, she instinctively hid her from the Fused, believing that they would kill the little spren.[9]

From then on out, Timbre would accompany Venli everywhere, carried around in Venli's spheres pouch and coming out only when there was no-one around to see her.[1] Though initially hostile, Venli continued to hide her from the Fused, and eventually gave her the nickname. When the two were on the outskirts of Kholinar, Timbre finally made it clear that she wanted to form a Nahel Bond with Venli. Venli, however, was hesitant, believing that she could not live up to the high standard set by Eshonai. It was around that time that Timbre began using the Rhythm of Peace to try and push down Odium's influence; she also helped Venli hear the old Rhythms again.[3]

When Dalinar brought Venli into a highstorm vision to speak with her, Timbre somehow entered it after her. She managed to reach Venli as Odium tore the vision apart, before Dalinar sent them both back out to protect them.[10] Later, she accompanied Venli at the Battle of Thaylen Field, although she remained hidden in her pouch, initially trying to pulse to Peace before growing too scared of Odium to continue.[6][11]

After Odium failed to turn Dalinar to his side, Venli snuck away from the battlefield. She began to state the First Ideal, but before she could finish it, one of the Fused noticed something happening. Timbre used to moment of confusion as he grabbed Venli's pouch to leap over into Venli's gemheart and trap the voidspren residing there. Once the Fused left, having found nothing, Venli retreated to a private ship cabin and drank in Stormlight, proving that Timbre has managed to make her a Surgebinder.[2]

Afterwards, the two discussed their new bond. Timbre told Venli about her grandfather and her distrust of humans before encouraging her to share the true story of the listeners with the awakened Parshmen, determined to oppose Odium.[5]

Timbre is possibly the daughter of Ico. Venli, in conversation with Timbre, learns that Timbre's grandfather was a spren killed by the Recreance[5] -- something that also happened to Ico's father. Ico also remarks that his daughter abandoned her employment at the moneychangers' in Celebrant to chase "foolish dreams".[12]

This article is still missing information. Please help The Coppermind by expanding it.
Retrieved from "https://coppermind.net/wiki/Timbre?&oldid=126465"
Categories: