“What is your passionate fury, Moash, the man with an ancient singer's name? ”

Lady Leshwi is a singer and high ranking member of the shanay-im, a type of Fused. She is instrumental in bringing Moash to Odium's side. 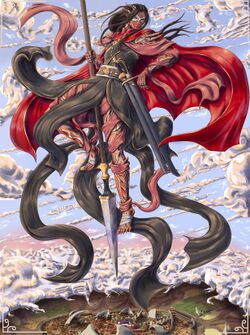 Leshwi has the seemingly rare physical trait of black, white, and red marbling on her face. Her eyes are ruby like and colored deep red. Little more can be said about her appearance since she, like all Fused, possesses another singer's body. While flying, Leshwi wears a long red robe.[1]

She is one of the leaders of the singers during the Siege of Kholinar. In her view, this is because she is one of the few Fused that are still sane.[1] Moash thinks her place in the chain of command is closer to that of a field captain than a highprince.[2] Leshwi chooses her station carefully.[3] She's a Fused of high enough station that the leaders defer to her but not high enough that she is required to stay out of fights.[4]

Passion is an important virtue to Leshwi.[1] This likely is related to the fact that Odium believes 'Passion' to be his intent.[5] Leshwi requires those who serve her to have Passion and will not hire those who do not demonstrate it.[6]

During the Last Desolation, she was reincarnated into a malen body, but has her beard shaved by a barber, and keeps her hair long. She actively hates the whiskers that grow upon her, even when soft and faint.[6]

Leshwi is able to use Voidlight and is skilled with the Surge of Gravitation.[1][2] She doesn't heal from wounds like most Knights Radiant do.[7]

When Leshwi fights Moash she uses a long, curved Parshendi sword.[7] She is considered one of the better fighters among the Fused.[2] 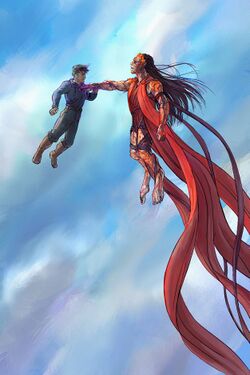 Little is known of Leshwi's previous life, except that she was friends with an honorspren named Riah, and at some point, presumably during the First Desolation she died and was reborn as one of the Fused.

When Moash, Graves, Febrth and Fia set up a camp, Leshwi and three other Fused attacked them. Only Moash was able to fight back effectively; his companions were dead within seconds. Moash used his Shardblade to fight Leshwi, but when she realized that Moash isn't well practiced with the sword she attacked more fiercely. She was surprised when Moash dismissed his Shardblade, dashed away, and picked up a spear. She then Lashed Moash into the air, but he pulled her with him and killed Leshwi midair by ramming a knife in her chest. Leshwi's companions took Moash captive after that.[7]

Later, during the Siege of Kholinar, Moash demanded to speak to a Fused in charge, and he was brought to Leshwi. While hovering in the sky, the two of them had a long conversation. Leshwi said that 'Moash' is a singer name and reveals to Moash that she is the one whom he killed before. Because Leshwi was impressed by Moash's passion, she explained to him why the Fused are at war with mankind. After this conversation, she let Moash go as a free man, but Moash chose not to leave.

In the aftermath of the Battle of Kholinar Leshwi visited Moash during his work clearing rubble. She knew that he was curious about why they were destroying the Kholinar Palace even more, but said that he will get to know why in due time. They were probably looking for Elhokar's cryptic.[8] Leshwi was pleased that Moash was content with that answer, and ordered him to come up the palace because Hnanan had a request for him.

During the evacuation of Hearthstone, Leshwi was among the three flights of Heavenly Ones, and she dueled Kaladin. During the battle, she wielded a raysium spear with a gemstone at its base, capable of drawing in a Knights Radiant's stormlight.[4] Leshwi stabbed Sigzil with this spear but spared his life as a sign of respect to Kaladin for sparing a Heavenly One earlier in the battle. After another exchange with Kaladin that left them both wounded, Leshwi accepted a draw and allowed Kaladin to defend a group of civilians under attack by Lezian.[10]

After returning to Kholinar, Leshwi attended a meeting of the Nine, where she, with her Voice, Venli, described the Fourth Bridge to the Nine and explained how it seemed to operate. During the meeting she claimed the right to battle Kaladin over Lezian, enraging him. She also showed disapproval of Raboniel's plan to besiege Urithiru.[3] 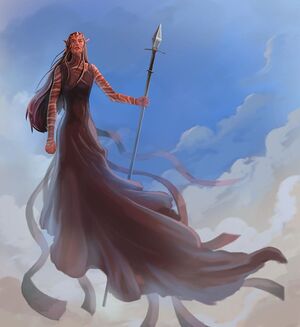 Leshwi offered up all of her servants save two to Raboniel, including Venli, and gave Venli orders to bring her reports on Raboniel's actions.[11] Once Urithiru was taken by the Fused, Leshwi took custody of Lirin, Hesina, and Oroden to protect them from Lezian.[12] Leshwi accepted another duel with Kaladin but showed mercy to him when she discovered he didn't have access to all his Surges. The duel ended when Kaladin escaped to destroy a node of the Sibling.[13] Later, Venli revealed that she is a Radiant and Leshwi was overjoyed, proclaiming that the spren have forgiven the singers.[14] Leshwi asked Venli whether her spren knew her old friend, an honorspren named Riah. Venli says she does not but, that there are spren willing to bond singers again. Leshwi replied that her soul has been too long owned by someone else for that.[14] Lezian's soldiers then attacked the unarmed humans protecting the unconscious Knights Radiant; Venli whispered that she was caught between two worlds and didn't know what to do. Leshwi responded, "It's all right, Voice. I know the answer."[14] She then unsheathed her sword, flew directly to the fight, and commanded the singer troops to halt. When they didn't, Leshwi attacked them, and her troops joined her.

Singer fought singer; on one side were Leshwi, five Heavenly Ones, about twenty Regals, and the humans civilians. On the other side were Lezian's singer troops. Lezian's troops were afraid of the Fused and soon fled, leaving their dead behind.[14] Leshwi insisted that the humans she had fought alongside submit so that Leshwi could explain the situation to Raboniel and not seem in rebellion. The humans refused, and violence seemed inevitable, until Rlain took command of the situation. He told Leshwi that she had defied Odium and so would be punished unless she and her troops escaped with him. Leshwi reluctantly agreed.

Before they could depart, Deepest Ones and hundreds of stormforms arrived to exterminate them; they attacked, killing, among others, one of the Heavenly Ones. Leshwi's group of Heavenly Ones, Regals, and humans would have been overwhelmed, but Kaladin arrived in his new Shardplate, which he sent out to protect those about to be killed, including Adin, Dabbid, and Leshwi herself. She had speared a stormform that had released a flash of lightning that enveloped her, but was saved by Kaladin's Plate. Simultaneously, the Sibling bonded with Navani and the defenses of Urithiru were fully restored. The Fused, including Leshwi, collapsed unconscious. Afterwards, once they had been brought to the Oathgate, Leshwi and the four surviving Heavenly Ones regained consciousness.[15] They, along with Rlain, Venli, Dul, Mazish, and the others that Venli had recruited, were transported to Narak via the Oathgate, where Leshwi helped find the free group of listeners.[15] 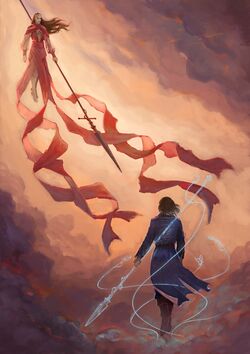 by Gerva Perez
Facing off against Kaladin in the skies

Leshwi initially was angered at Moash because he managed to kill her so unexpectedly, but over time this anger was converted into admiration for Moash's passion. Leshwi is intrigued by Moash's motives, and he impresses her so much that she releases him. However, just before releasing him Leshwi told Moash to prove himself, and when he recalled this he voluntary returned to his parshmen crew, what seemed to be what Leshwi hoped he would do.[1]

“It is rare to find a human who can fight in the skies well enough to be a challenge for me. ”

Leshwi and Kaladin seem to have a mutual respect. Leshwi sees him as a rare challenge to battle in the skies.[12] They have multiple duels, none of which end with a clear winner. When Kaladin's powers are suppressed by corruption of the Sibling, Leshwi does not take the advantage and kill the windrunner, instead she shows honor in not wanting to beat him in an unfair fight.[13] Kaladin also values her opinion of him, making sure she understood he hadn't technically accepted a duel and wasn't fleeing when he left.[13]

After the events in Urithiru and the fighting between the singers and the humans, Kaladin offers Leshwi aid and a place to stay in Narak, but she declines.[15]

Venli serves as the Voice of Lady Leshwi, expressing Leshwi's desires to others.[6] Initially Leshwi values Venli for her unique Envoyform talents, however treats her coldly due to her position as a servant. After her Voice's actions in Urithiru, spying on Raboniel and helping Leshwi protect Kaladin's family,[12] Leshwi begins to warm to her. When Venli reveals she has bonded a Radiant Spren Leshwi is overjoyed.[14]

This page is probably complete!
This page contains most of the knowledge we have on the subject at this time.
It has yet to be reviewed.
Retrieved from "https://coppermind.net/wiki/Leshwi?&oldid=168707"
Categories: