Hesina is a female darkeyed Alethi of the second nahn[3] on Roshar. She lives in Hearthstone with her husband, Lirin and her youngest son, Oroden.[2] She is also the mother of Kaladin and Tien.[4]

Hesina's home is built on the outskirts of Hearthstone and is larger than the normal household building due to the inclusion of her husband's surgery room.[3] 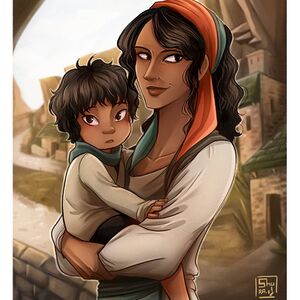 Hesina is a pretty darkeyed woman, with full lips, a narrow face and a bold chin.[4] She is tall and stands several fingers above her husband.[5][6] She has dark hair that is usually in a tail and wrapped in a kerchief.[5] Hesina often wears brown clothing, sometimes with a hint of color.[5][7] During the colder months, she wears a knitted hat over her kerchief and a long brown coat to keep warm.[5] Like many darkeyed women,[8] she covers her safehand with a glove as it is more practical.[9]

Hesina is quick witted and sharp tongued.[5] She is open minded[10] and wishes for her children to have a choice over their future Callings.[10] She is an eloquent speaker and expects the same of her children.[5] Unlike the other mothers in Hearthstone, Hesina rarely chastises her sons for odd behaviour and sometimes joins them.[10] She enjoys working around the town, cleaning buildings and removing crem, as she finds it a useful way to clear her head.[5]

“Spren appear when something changes—when fear appears, or when it begins to rain. They are the heart of change, and therefore the heart of all things. ”

Hesina follows the Vorin religion and is more religious that her husband.[11] She has faith in the power of glyphwards, often burning them for her family or giving them to her sons.[11] She has a preference for simple and straightforward glyphs.[12]

Hesina believes that all things, with the exception of people, have a spren living within them.[7] When objects such as food are consumed, the spren within them are freed to return to their home.[7] People, by contrast, have souls instead of spren, however, Hesina believes that small spren can reside in parts of the body.[7] A similar thought is echoed by Syl, when she discusses the genders of Kaladin's weapons with him.[2]

Hesina is able to both read and write in the Alethi women's script. She is the only darkeyed woman in Hearthstone who is able to read, though this skill isn't uncommon among higher ranking darkeyed women.[14]

Although her exact parentage and place of birth are unknown, at least one of Hesina's parents was not a darkeyes.[15] By the time Hesina was seventeen, they lived in Tomat, where Hesina's father was a privileged business owner and was able to bully the citylord into following his wishes.[16] After meeting Lirin, Hesina moved away from her family to live in Hearthstone and started a family, leading to a drop in her social status.[14][17] Two years after the birth of her first son, Kaladin, Hesina was blessed with the birth of her second child, Tien.[3] There is a large age gap of eighteen years between Tien and her third child, Oroden.[3][2] 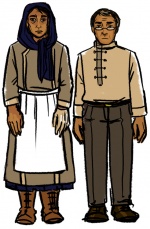 Due to their close ties to the local Brightlord, Hesina and her husband had hoped to secure an allegiance between the two families through marriage.[5] When Brightlord Wistiow fell gravely ill, making the likelihood of the union improbable, Hesina and her husband conspired to steal a significant amount of wealth from the Brightlord to secure passage for their son to continue his studies in Kharbranth.[7] The family claimed that the diamond broams[3] had been bequeathed to Lirin by Wistiow on his deathbed, a claim that they supported with forged documentation.[5] Despite their best efforts to legitimize the agreement, rumors of theft persisted amongst the other townsfolk.

After his death, Wistiow was replaced by Brightord Roshone as the lord of Hearthstone.[5] On the day of his arrival, Hesina was found by Kaladin, cleaning and working at the town hall. Frustrated with the gossiping townsfolk, Kaladin spoke to his mother about the rumors surrounding their family as well as his place within the town. While talking, Hesina admitted that she had hoped for Kaladin to be able to marry Laral, the daughter of Brightlord Wistiow. The arrival of Roshone pulled Hesina away from her work, as the town gathered to greet the new Brightlord. Joining her second son Tien, who had saved places for the family in the town square, Hesina and her family waited to greet the new citylord. Roshone's arrival did not bode well for the family, with the Brightlord taking an immediate disliking towards her husband, despite Lirin's attempts to welcome the him to Hearthstone.[5]

Torment of the Family[edit]

Roshone, aware of the inherited spheres and the possibility of their illegitimate procurement, demanded their return, of which Lirin refused. Roshone continued to fuel the rumors that the spheres had been stolen and the agreement forged, whilst also driving the family towards destitution.[7] Despite his best efforts, Hesina and her family did not suffer as much as Roshone assumed, as the townsfolk continued donating to the family in secret, leaving food around the town for Hesina to find.[7] When the possibilities of work for Hesina dried up due to Roshone's meddling, Lirin met with the Brightlord to discuss the disputed spheres and the family's situation. In an attempt to hide the meeting between Lirin and Roshone, Hesina recruited her sons to help her with housework, hoping to keeping them distracted and occupied. Ultimately, her plan was unsuccessful, and Kaladin escaped his duties, joining his father in Lirin's meeting with Roshone. After the meeting, Kaladin discovered his father's plans to deceive Roshone, as well as the truth behind the acquisition of Wistiow's wealth. Kaladin was shocked not only to learn that the rumors that the spheres were stolen were true, but also that his mother had taken part in their theft.[7]

Following the death of Roshone's son Rillir, the family fell further towards poverty and Hesina and her husband began to slowly spend the stolen spheres. This was done deliberately; while the family indeed struggled, the spheres were spent, not because it was required, but instead as a way to deceive Roshone and deflect his attention.[10] 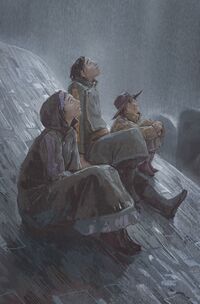 by Marie Seeberger
Watching the Weeping with her sons

Despite their attempts to curb Roshone's anger, Hesina and her husband were ultimately unsuccessful. After spending time with her sons in the rain, Hesina and her family joined the townsfolk of Hearthstone to welcome Highmarshal Amaram--a general for the Highprince and cousin of Roshone. Amaram, who had gone to Hearthstone to visit his cousin, used his visit as a recruitment opportunity for the princedom's army. After only six men volunteered, Amaram began conscripting men from the village, including Hesina's son Tien. Unlike his father and brother, Tien wasn't exempt from conscription on the basis of his duties, a fact that Roshone exploited, impressing the boy as retribution for Lirin's inability to save his own son's life. Kaladin, unable to let his brother face the battlefield alone, volunteered to join, promising his parents that he would keep his younger sibling safe from harm.[10]

Less than four months later, Tien was killed.[18] After his death, Hesina received a short message from Kaladin, informing them of his brother's death and that he would not be returning to Hearthstone. They did not send him a reply.[19] Years later, after Kaladin was sold into slavery, Hesina and Lirin received word that he had also been killed.[6] Roshone's guilt over what he had done lessened his hostility towards Hesina and her husband, with life quieting down somewhat after the departure of their children.[6]

After the coming of the Everstorm, Hesina was reunited with Kaladin when he returned to Hearthstone. After arriving at the battered manor, Kaladin located his mother and father in the parlor, tending to those who were wounded by the Everstorm. While her husband argued with Roshone's guards, Hesina saw to her son, feeding him and filling him in on their family's situation. Later, after he spoke privately with Roshone and Laral, Hesina introduced Kaladin to his younger brother, Oroden. When Kaladin departed to track down the transformed parshmen, Hesina stayed behind with her husband in Hearthstone to aid the townsfolk and care for her son Oroden.[6][2]

One of Hesina's parents is not darkeyed,[15] and since Hesina describes her father as "stubborn as a lighteyes" rather than actually lighteyed, it is likely that this refers to her mother.[16] They are of a higher social standing than their daughter.[17] 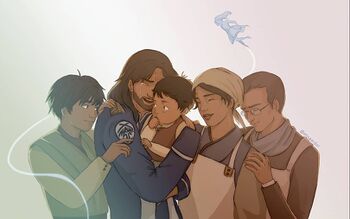 Hesina and Lirin meet and fall in love during his travels, after which Hesina moves with Lirin to Hearthstone.[14] They have a loving relationship, though they don't see eye to eye over Kaladin's study habits when he is young[3] or over religion.[11] Later, they disagree sharply over Kaladin's actions as a Knight Radiant, with Hesina trying to persuade Lirin to accept their son's decision to fight rather than to be a surgeon.[16]

Hesina and her husband hope that one day their son Kaladin would be able to marry Laral, the daughter of the Brightlord Wistiow.[3] During his earlier years, his parents often encourage both Kaladin and his brother to play with Laral to help strengthen the bond between the two families.[5] Hesina often banters with her son, Kaladin, who inherits her tendency towards clever wordplay.[5]

As a child, Kaladin remembers his parents being at odds with each other over the importance of his commitment to study. While his father wishes for him to focus on his future and the chance to study and learn in Kharbranth, his mother wishes for him to be able to enjoy his childhood. Whether due to or despite these disagreements, Kaladin is granted two hours a day by his father where he is not required to study.[3] After the arrival of Roshone, Kaladin's parents try and get him to Kharbranth earlier than normally allowed, writing to the surgeons and requesting for their son to take the entry tests early. Their request is denied.[14]

When they are reunited, Kaladin finds that his mother still treats him like a child despite their many years apart.[6] She is delighted to find out that her son is a Knight Radiant.[2]

This article is still missing information. Please help The Coppermind by expanding it.
This article was complete and reviewed prior to Rhythm of War, but now needs to be updated.
Retrieved from "https://coppermind.net/wiki/Hesina?&oldid=166595"
Categories: