The shanay-im, translated as Those Ones of the Heavens and often referred to simply as Heavenly Ones, are a brand of Fused who can use the Surge of Gravitation.[1]

The shanay-im are Fused who can manipulate the Surge of Gravitation. Fused of this brand can manipulate their own gravity without expending Voidlight, but must use it to heal themselves or to Lash things other than themselves.[2] These abilities are similar to the Basic Lashing used by the Windrunners and Skybreaker.[1] Shanay-im are often seen manipulating the gravitation vector of both themselves and other bodies and objects, resulting in abilities such as flight, reduced weight, and sending their enemies flying off into the air. The Fused accelerate more slowly than Surgebinders when using Gravitation.[3] This is due to them expending less energy and does not have to do with the gravity of Braize.[4] Over a large span, Fused will go faster than Surgebinders.[5] Fused can only Lash themselves once.[5] These Fused are able to enter space, but cannot travel far, since they would require a large amount of Voidlight to heal due to the lack of air and pressure.[6] 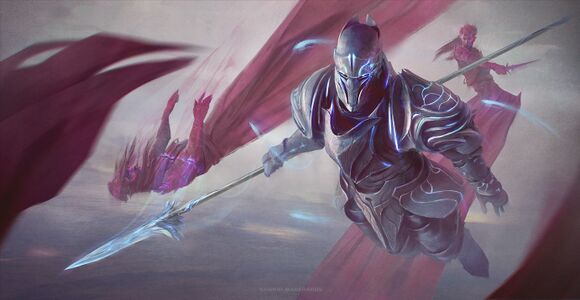 Shanay-im usually wear extremely long robes, trailing behind them several feet. They utilize long lances suited for aerial combat, with aluminum coating to block Shardblades and a fabrial to drain Stormlight from the Radiant it pierces.[1]

When fighting Windrunners, they hold an honorable tradition of one-to-one dueling. They raise their weapons to those they wish to duel, and engage upon consent from the Windrunners. The rest of their members float about and do not interfere with the duel. The Windrunners play along with the tradition, as the Windrunners have a smaller number and this prevents them from being ganged up on.[2] This tradition does not extend to normal soldiers.

After the Fused capture Kholinar, the shanay-im oversee the construction of a line of twenty large spires in the city. The columns are narrow pillars of stone that are about one hundred feet tall. They each have a guardhouse at the bottom that controls access to a wooden staircase that winds up the pillar. The design of the spires is reminiscent of an ancient stone pillar in Narak; they look precariously balanced, yet they are able to survive highstorms. At the top of each spire is a room known as a High Chamber that is open on two sides and has no railings at the edge. These chambers serve as living quarters for the most important of the shanay-im; their Voices typically live in the guardhouse. They have other servants that attend to them, including a stormsetter that is charged with packing up the shanay-im's possessions before each storm. Lesser shanay-im live in conventional housing.[7]

This article is still missing information. Please help The Coppermind by expanding it.
Retrieved from "https://coppermind.net/wiki/Shanay-im?&oldid=167260"
Categories: