Hearthstone is a large but remote town[1] near the eastern border of the Sadeas princedom in Alethkar.[2] The town serves as a focal point for the various farming communities in the region.[3] The northern section of Sadeas princedom, including Hearthstone, is overseen by Highmarshal Meridas Amaram prior to his departure to the Shattered Plains.[1]

It is the home of Kaladin's family.[1] 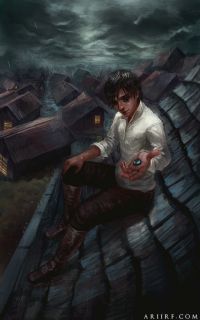 Hearthstone is built alongside a steep hill known as the breakwall, that protects the town from the highstorms.[4] In the centre of town is the breakwater, a large hole cut in rock to catch rainwater.[4] The buildings in the town are built in rows and are wedge shaped with a sloped eastern side.[5] Windows are rarely found on the northern or southern sides of buildings, but are often built on the sheltered western side.[5] There are around 100 structures in Hearthstone and it is large enough to have a bakery and several taverns, as well as a central town hall.[5][6] Kaladin’s home can be found on the outskirts of the town and is larger than most homes as it also contains Lirin’s surgery.[5]

Hearthstone is about two hours away from Hobble's Brook and the fields belonging to Hobbleken.[3] The town of Stringken, is about half a days walk from Hearthstone,[7] while the city of Revolar would take several weeks to reach by foot.[8]

Hearthstone is a farming town and the surrounding hillsides are covered with lavis polyps.[5] The lands are less fertile than they have been in the past[4] and the farmers of Hearthstone are always wary of the worms that can infest their crops. During worming season, the fields of lavis are checked multiple times, a process that takes weeks to complete.[5] Local flora includes thickets of snarlbrush, stout markel trees and stumpweight trees. Whitespine's live in the area near Hearthstone and occasionally causes problems for travellers.[9] Crimes such as theft, rarely occur in the town,[9] however, banditry has sometimes been an issue.[9]

The citylord's manor is two stories and is situated to the north-west of the town.[3] It is constructed from thick white stone with pillars on its leeward side and like the other buildings in Hearthstone, it is sloped on its eastern side.[4] A garden containing exotic and colorful plants reside in the mansion's front grounds and is better cared for by Brightlord Roshone than his predecessor, Wistiow.[4] The inside of the mansion is decorated with ceramics and lit by a combination of oil lamps and spheres.[4] The parshman and servant quarters can be found on the northern side of the manor.[3]

The members of Hearthstone live simple lives, fairly free of ostentation.[6] Most of the dark eyed inhabitants of the town are of the fourth or fifth nahn.[5] Kaladin’s family are the exception, being the only darkeyed family of a higher rank. They are of the second nahn.[5] Hesina, is also the only darkeyed women in Hearthstone to be able to read and write in the Alethi Women's script.[9]

A large majority of the town is destroyed after the Everstorm is summoned and begins to roam across Roshar.[3] The manor house, while battered, withstands the storm enough to allow the people of Hearthstone and refugees from surrounding villages to relocate there.[10] Four of the towns silos are destroyed by the storm, crippling their ability to feed the townspeople.[7]

Brightlord Roshone took over management of the town several months after the death of Brightlord Wistiow. Roshone resented being relocated from Kholinar to Hearthstone, treating the townsfolk with disdain and contempt.[6][9] He had a particular dislike for Kaladin's father, Lirin, whom he clashed with from the moment he was relocated to the town.[6] After settling in the town, Roshone began making life hard for Lirin and his family, suggesting that he did not deserve the town's donations for his work and fueling the rumors surrounding Lirin's inheritance of Wistiow's wealth.[9]

The townspeople reacted to Roshone with a mixture of fear and awe, resulting in them often trying to appease him.[9] An arranged marriage between Roshone's son, Rillir, and Wistiow's orphaned daughter, Laral, was initially proposed;[7] however, Rillir was killed by a whitespine before the finalization of their union.[11] Roshone was injured in the same hunt which claimed the life of his son, losing the lower part of his right leg.[11][10] The townspeople became more cautious around Roshone after his son's death, wary to provoke a negative response from the brightlord. Unwilling to lose the chance to access Laral's wealth, Roshone married the young woman in the place of his son.[12]

When Brightlord Amaram's army passed through Hearthstone to recruit soldiers, Roshone asked for volunteers and then forcibly conscripted other eligible citizens, including Tien, son of Lirin. In the hopes of protecting his brother, Kaladin also joined the army, despite his immunity to the draft due to his position as surgeon's assistant.[12] The feud between Lirin and Roshone settled to a degree after the departure of Lirin's sons.[10]

After the town was largely destroyed by the first Everstorm, the townsfolk relocated to Laral and Roshone's mansion.[10] Kaladin found the townsfolk, including his family, gathered here after he returned home following the Battle of Narak. Kaladin's return caused quite a stir among the villagers due to a combination of his slave markings, his possession of a Shardblade, and his position as a Knight Radiant.[10][7] After gaining information regarding the whereabouts of the town's missing parshmen, Kaladin departed the town, which he left in the care of Roshone and Laral. Kaladin's parents, as well as his infant brother, Oroden, also remained behind in Hearthstone when Kaladin departed.[7]

Within one year of the Battle of Thaylen Field, Hearthstone was occupied by the Fused. Abiajan became the citylady of Hearthstone. During this time, Hearthstone acted as a refugee camp for those fleeing the war in Herdaz. Laral conspired with Lirin to protect the Herdazian general known as the Mink, who was posing as a refugee. The plan was interrupted as Lezian arrived. Kaladin was shortly revealed to be among the line of arriving refugees, instigating a duel.[13] After defeating Lezian, Kaladin returned to Hearthstone and confronted the remaining singers, killing one before the rest retreated. The Fourth Bridge arrived to evacuate the citizens of Hearthstone along with the refugees.[14] A battle between the Fused and Knights Radiant broke out. During the battle, the shanay-im took the opportunity to observe the Fourth Bridge but largely avoided the civilians. Laral's home (the citylord's manor) was burned by Lezian, who took several townspeople captive to draw Kaladin's attention. Kaladin killed Lezian while his surges were being suppressed by a fabrial,[15] but Laral's husband Roshone was also killed by Vyre within the manor.[16]

All but fifteen townsfolk were evacuated from Hearthstone to Urithiru via the Fourth Bridge,[17] where the former residents of Hearthstone settled into a neighborhood on the sixth floor.[18][19] Under Jasnah's new inheritance laws, Laral gained the title of citylady.[18]

An arranged marriage was set up between Roshone's son, Rillir, and Wistiow's daughter, Laral, for the purpose of an alliance between their houses.[4] After Rillir's death following a whitespine hunt, Roshone marries Laral in his place. Despite her younger age, Laral holds more authority over the people of Hearthstone than her husband.[7]

Armies occasionally pass through Hearthstone, particularly during the Weeping,[12] looking for new recruits and to replenish their supplies.[12] The frequency of their passing increased after the beginning of the War of Reckoning.[12] The permission of the citylord must first be given before any of the townsfolk depart with the army,[5] and volunteers must be of at least fifteen years of age.[4] The citylord can also allow for the impressment of their citizens into passing armies.[12]

For a full list, see :Category: Residents of Hearthstone.

This page is probably complete!
This page contains most of the knowledge we have on the subject at this time.
It has yet to be reviewed.
Retrieved from "https://coppermind.net/wiki/Hearthstone?&oldid=163693"
Categories: