“Never furious, never passionate like a highstorm. Slow, steady. Like the blood of a dying year that was taking its last few shambling steps toward the cairn. ”

—Kaladin's thoughts on the Weeping[1]

The Weeping is a four weeks long period of time on Roshar, marking the end of the planet's five-hundred-day year.[1] The singers call it the lull.[2]

by Sheep
Rain on the Shattered Plains

In the weeks preceding the Weeping, highstorms grow more and more infrequent, before eventually stopping altogether.[3] A few days after the last highstorm, the skies cloud over and it begins to rain. The rain continues ceaselessly for two weeks until Lightday, the Rosharan New Year.[1] On Lightday, one of two things happen. If the Lightday marks the start of an even-numbered year, the day will be calm - such years are called Light Years. At the start of odd-numbered years, the Weeping is instead interrupted by a highstorm.[4] Following Lightday are two more weeks of constant rain.[5][footnote 1] At the end of the Weeping, the highstorms return, albeit initially weaker than usual.[6]

The Weepings are characterized by slow, steady, unstopping rainfall that doesn't deposit crem. There are no heavy winds or other extreme conditions generally found during a highstorm.[1][7] The sky is perpetually overcast, bathing the land in twilight.[8] Rainspren are commonplace.[1]

Halfway between the Weepings is Midpeace, another prolonged period of time with no highstorms.[9] In contrast to the Weeping, storms are more frequent before and after Midpeace, and the Midpeace itself doesn't see much, if any rain.[10][11] 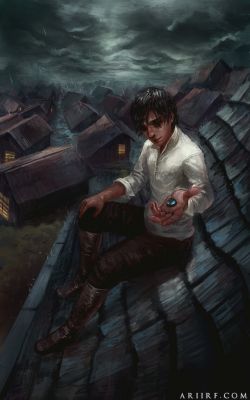 The people of Roshar are used to the Weepings. While they do wear rain-proof clothing, such as long coats and wide-brimmed hats, it's generally understood that everyone and everything will be utterly soaked throughout.[12][13] Most Rosharans approach this stoically, weathering the rain while enjoying the break from the highstorms.[13][14] Sometimes, they measure their age in Weepings, saying "sixteen Weepings old" or "hadn't reached her twentieth Weeping".[15][16]

In the Vorin religion, the Weeping is supposed to be a time for self-reflection and contemplating the Almighty.[17] In Yeddaw, the Weeping is celebrated by eating the city's ten famous pancakes.[18] Urithiru, in turn, isn't affected by the Weepings, as the tower stands far above the clouds.[19]

The prolonged period of no highstorms leads to a lack of Stormlight. Rosharans try to preserve it throughout by using enormous gems capable of storing vast amounts of it, with a specific, multi-faceted cut that further prolongs the Stormlight retention. Despite that, few gemstones make it to the next highstorm still infused.[7] A perfect gemstone could keep Stormlight for that long, but those are extremely rare.[20] The lack of highstorms also presents a problem to the singers, as they cannot change forms without them.[2]

The peace of the Weeping is an important factor in strategy. The lack of highstorms allows for greater mobility, as soldiers don't require stormshelters during that time, allowing them to resupply and quickly cross large distances.[21] Among others, Alethi armies sometimes set out on short military excursions during the Weeping to take advantage of this.[14][22] This being said, actually battling is more difficult -- among others, the rain makes it hard to utilize archers.[23]

Farmers generally don't work during the Weeping, as any seeds or seed-paste planted during that time would be washed away by constant rain, and some plants might even die from excess water.[24][12] The period of calm highstorms directly following, however, is a prime time for planting.[6] In contrast, fishermen work especially hard during the Weepings, as their ships are constantly flooding.[25]

In some places, the Weeping is harnessed for cleaning and washing areas that would normally be too difficult or time-consuming to tidy up.[7][26]

The Weeping between the years 1173/1174 was markedly different from the usual, owning to the Battle of Narak, which took place two days before the Lightday.[27] Even before the battle began, people noted unusually strong winds, far in excess of what could normally be expected.[17] During the fighting, the listeners summoned the Everstorm, while the Stormfather sent a highstorm to oppose it.[28] This caused the regular pattern of the Weeping to be altered.

Elsewhere in the world, the Weeping stopped, then started, then stopped again.[18] The out-of-pattern highstorm arrived during that time without warning, leading to only some spheres capturing Stormlight.[29] The Everstorm came a few days later, throwing people off further.[30] What followed was a period of drought that lasted until Jesevan 1174, when the highstorm returned.[31] Overall, the strange non-Weeping lasted seven days longer than a regular one.

How this sequence of events, as well as the addition of the Everstorm, will impact future Weepings is yet unknown.

This article is still missing information. Please help The Coppermind by expanding it.
Retrieved from "https://coppermind.net/wiki/Weeping?&oldid=153201"
Categories: