The Nightwatcher is a powerful spren on Roshar. She is a Splinter of Cultivation and grants boons and curses to mortals through the Old Magic.[2] She is one of the three potential Bondsmith spren.[3]

The Nightwatcher would bless those who sought her out with one blessing of her choosing. In exchange for this blessing, she also bestows a single curse, although this curse very rarely has any obvious relation to the blessing that was gained.[4] Because of the Nightwatcher's ethereal nature and ties to a single location, the Valley, she is considered by many to be a powerful spren.[5][6][7][8] It is surprisingly common for devoutly Vorin lighteyes go to the Nightwatcher at one point or another over the course of their lives.[9]

She does not always appear to those seeking her, having a tendency to avoid groups and likely foreigners like Felt. Supposedly, the best time of day to visit the Nightwatcher is right after the sun sets.[2] 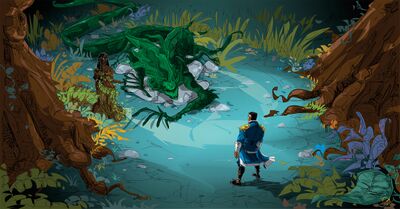 The Nightwatcher manifests in the Physical Realm as a dark green mist shaped vaguely like a person. Described as crawling on the ground with too-long arms reaching out and pulling her along as she floats above the ground. She appears to leave a trail of her essence behind her, like a river of twisting vapor curling through the trees. The only part of her that has any detail is her smooth distinctly feminine face with silken black eyes. She seems to be able to create extra limbs like smaller hands to interact with people.[2] Cultivation made the Nightwatcher in such a way that she is not shaped by people's perception or belief of her, unlike most spren. This is why she behaves less human.[10]

Called "child" by Cultivation, it is likely that the Nightwatcher was created by Cultivation for a specific purpose from a different spren much like the Stormfather was by Honor. The Nightwatcher is implied to be one of three spren on Roshar that are shadows of a god.[1]

The Nightwatcher was deliberately created by Cultivation to be un-Connected to humans and is unaffected by the way they think about her.[10] This was done so she could grow more organically.

The Nightwatcher is one of the three great Bondsmith spren.[11][1] Forming a Nahel bond with her grants one the power over the Surges of Tension and Adhesion.[12] While a Bondsmith can use Adhesion the way a Windrunner would,[13] they can also apply their powers in different manner, using them more in the Spiritual. Using Spiritual Adhesion, a Bondsmith can form a Connection between themselves and another person, allowing them to speak their language.[14] They also seem capable of hearing the spiritual aspects of objects and using this to mend broken things back whole.[15] Each Bondsmith seems to make use of a different variety of Light to fuel their abilities, the Stormfather's Bondsmith uses Stormlight,[16] the Sibling's Towerlight,[17] and presumably the Nightwatcher grants her Bondsmith Lifelight. 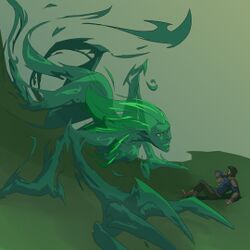 by EccoS
Meeting a petitioner

The Nightwatcher claims to have the ability to grant almost any physical request one might ask of her, though just because she can does not mean she will give what is asked for. She claims to be able to give many things such as renown, wealth, skill, the ability to swing a sword and never tire, beauty, followers, and glory, as well as physical possessions such as spheres, gemstones, Shardblades and Plate, or even a unique and highly Invested item like Nightblood. The Nightwatcher does have trouble with extremely nebulous requests relating to human emotion.[2] The Nightwatcher is also capable of changing a person's species.[18] She can also change a person's eye color, and has done so in the past.[19]

Anyone is allowed to seek a single boon from the Nightwatcher. To do this, the supplicant must first travel to the Valley in the west, where the Nightwatcher resides. After finding the Nightwatcher, the supplicant may request a boon. There are no clear restrictions on what the Nightwatcher has the power to grant--like most things regarding the Old Magic, the few known facts are surrounded by a web of myths and legends. The precise phrasing of the request does not appear to make a difference, however, since the Nightwatcher bestows a boon that she feels the supplicant deserves. In most cases, the continued pain of the curse appears to outweigh the blessing of the boon, even if the supplicant receives the boon they desired. A notable exception was Av's father, who received enough cloth to keep his family from starving during a famine. His curse, seeing the world upside down, apparently stopped troubling him after he acclimated to the situation.[4]

Contrary to popular belief, it is not possible to avoid the curse by carefully phrasing a request--or even to predict the curse that the Nightwatcher will bestow.[4] Interestingly, it does not appear that balance is carefully maintained through an individual blessing and curse--often, highly visible curses are the result of relatively minor boons. The curses can be quite thorough, however--in one case, a man lost all feeling in both of his hands until the day he died. Whether these curses follow some cosmic justice, or are merely the result of a capricious spren, is unknown.

The curse, as well as the boon, is permanent. Through history many visitors have tried to get rid of their curse, but there are no known cases of success.[20]

Dalinar Kholin
Dalinar sought the Nightwatcher to end the pain he was feeling after accidentally causing the death of his wife, Evi Kholin. When he finally went to the Nightwatcher, he asks to be "forgiven", much to the confusion of the Nightwatcher. Eventually, Cultivation comes out and erases his memory of Evi. She describes it as "pruning" his memory, so he can grow and heal. She mentions that his memories will eventually return. He has no memory of killing her or anything involving her, although he is aware she existed. Additionally, when someone mentions her name, all that he hears is "Shshshsh". Dalinar keeps his request, boon, and curse very private, and very few people know of his visit to the Nightwatcher. Though Dalinar doesn't remember until just prior to the Battle of Thaylen Field, his boon and curse were given to him by Cultivation, not the Nightwatcher. The memory came back gradually before Odium attempted to make Dalinar into his champion and failed.[21]
Taravangian
Taravangian claims to have asked the Nightwatcher for, "Capacity. Capacity to stop what was coming. The capacity to save humankind."[22] As a result, Taravangian's level of intelligence varies from day to day. This enabled him to write the Diagram on a day of particularly notable intelligence. He believes that his curse is a level of compassion inversely proportional to his intelligence; he feels little to no compassion on days of high intelligence, contrasted with days of low intelligence and great compassion "to feel pain for what he had done."[22] On a day similar to the day he wrote the Diagram, he was cursed with low intelligence, but high emotion, which attracted one of the Shards, Odium, to him and Connected him to the Shard, allowing him to Ascend. As with Dalinar, Cultivation personally intervened when he asked for his boon.[23]
Lift
The precise wording of her request is unknown, but Lift believes that "she was supposed to stay the same, and the world was supposed to change around her."[24] Lift interprets this to mean that she shouldn't age, which does not appear to be the case. The boon and curse are unknown, but Lift's abilities to physically touch Wyndle and to digest food into Lifelight are apparently related to one or both of these.[25] Wyndle supposes that she is partially stuck in the Cognitive Realm.[26]

Av's brother
Av's brother's boon is unknown, as he was too embarrassed to share what he asked for. As a curse, both his hands became numb.[4] The rest of Av's brothers also went, as well as his mother. According to him, most of them regret their curse.

Av's father
As his boon, Av's father received a heap of good cloth, which he sold to keep his family from starving during the lurnip famine.[4] As a curse, he sees the world upside down. He claims that his curse was worth it, and it just took some getting used to.

Hoid
At some point Hoid visited and spoke with the Nightwatcher.[27]

This article is still missing information. Please help The Coppermind by expanding it.
Retrieved from "https://coppermind.net/wiki/Nightwatcher?&oldid=165772"
Categories: