The Order of Windrunners is an order of the Knights Radiant on Roshar.[1]

Those who join the Windrunners generally subscribe to a philosophy of protection, particularly defending innocents or those who are unable to protect themselves.[2][3] The order believes in structures of command, team dynamics, and the importance of a strong squad.[4][5] They are very militaristic by nature.[6] They tend to attract those who seek to protect the defenseless, but also enjoy action and fighting for what they believe in.[2] 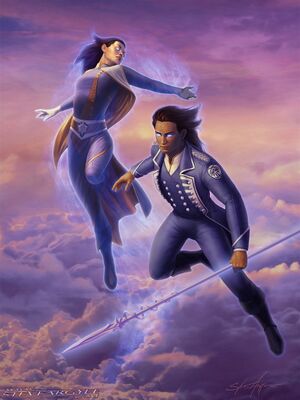 The Ideals of the Knights Radiant, also known as the Immortal Words, are a set of rules by which the Radiants live. The First Ideal is shared by all of the orders, and is used as a motto for the Knights Radiant as a whole. Each of the orders then have an additional four Ideals that are unique to that order.[7] The Ideals of the Order of Windrunners all focus on protecting the innocent and defenseless.[2] Whenever a Windrunner speaks an Ideal, a glyph forms from ice at their feet, due to their order's closeness to the Bondsmiths on the Double Eye.[8] Their oaths are generally acknowledged by the Stormfather.[9][5]

“Life before death, strength before weakness, journey before destination.”

“I will protect those who cannot protect themselves.”

The modern Windrunners considered those of the Second Ideal to be more than a squire, but not a full Windrunner.[10]

“I will protect even those I hate, so long as it is right.”

— The Third Ideal of the Windrunners (as spoken by Kaladin)[9]

— The Third Ideal of the Windrunners (as spoken by Teft)[11]

“I've got to protect people, you know? Even from myself.”

— The Third Ideal of the Windrunners (as spoken by Lopen) [12]

This oath focuses on protecting others despite one's caveats, but the exact wording varies from individual to individual.[13] It must be spoken before a Windrunner can manifest their honorspren as a Shardblade.[9]

“I accept that there will be those I cannot protect!”

— The Fourth Ideal of the Windrunners (as spoken by Kaladin) [14]

A major component of this oath is forgiving oneself for previous failures.[15] Upon achieving this Ideal, a Windrunner gains their Shardplate, which is formed of windspren.[16][17] 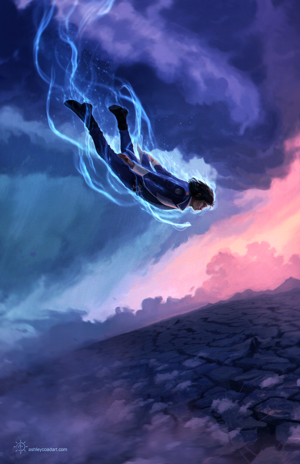 The Windrunners use the Surges of Adhesion and Gravitation. The combination of these two Surges resulted in the three Lashings.[18][19] Someone wearing Shardplate is immune to Lashings, but any objects that they are touching can be affected.[20] Using a combination of Adhesion and Gravitation, a Windrunner could theoretically exit orbit.[21] They have been noted as having traveled at at least 200 mph.[22][note 1]

Like most Knights Radiant, the Windrunners have squires, which their Resonance allowing them to have many more squires than other orders.[24][25]

Unlike other Radiant orders, Windrunners will "explode with power" when they speak oaths, due to their order's proximity to the Order of Bondsmiths.[8]

Using the Full Lashing, a Surgebinder can pool Stormlight into an area. All objects that subsequently touch this area will be bonded to the object, sticking them there and hindering their movement. The bond ends when the Stormlight runs out.[27]

Gravitation allows the Windrunner to change the direction and strength of an object's gravitational attraction.[26]

The Basic Lashing allows a Surgebinder to bind people or objects to different surfaces or in different directions, effectively changing the direction that gravity pulls them.[26]

Due to a combination of their two surges, Windrunners have new, secondary effects, known as the Resonance.[28] The Windrunners' Resonance is strength of squires,[24][25] which allows them to have many more squires than other orders. After Kaladin swore the third oath, many of the bridgemen who worked under him were suddenly able to breathe Stormlight and heal.[29] A squire can perform their own Lashings, but only when their Windrunner is nearby. Squires can use Stormlight effectively within thirty miles of their Windrunner, and their maximum distance was fifty miles. Squires will lose access to their powers in an hour or two after the Windrunner leaves.[30]

Windrunner Shardplate is comprised of windspren, and glows a vibrant blue.[17] It can be controlled to armor other people when they need protection from a Shardblade.[22][31] The windspren can also be used to create barriers that deflect stormwinds.[32]

Before the Recreance, the Windrunners primarily worked as scouts and special forces teams, and often used the Surge of Gravitation to deliver a team of Radiants on a secret mission.[33][2] Though they were very similar to conventional soldiers, and had an appreciation for command structures and team dynamics,[2] the Stonewards were generally considered the best soldiers, though the Windrunners did dispute that claim at times.[34] Nevertheless, they also focused the most on mastering their weapons. As a result of their resonance, they had the most squires of all the orders.[2]

Around the time of the Recreance the Windrunners were an order with over a hundred members,[35] and a considerable number of squires.[36] They also reportedly had some issues with the Order of Skybreakers.[36] At the beginning of the Recreance a large number of Windrunners along with many Stonewards abandoned their Shardblades and Shardplates before the fortress known as Feverstone Keep, which was recorded in one of Dalinar's visions.[35]

During the Battle of the Tower, the bridge leader Kaladin said the second Ideal of the Windrunners, becoming the first Windrunner since the Recreance.[3] After he swore the third Ideal, the other members of Bridge Four became squires,[29] and many of them eventually initiated Nahel bonds of their own.[11][5] Dalinar's coalition often uses them as guards for important people, for the transportation of people and goods, and as scouts.

As a result of both their past as bridge crews in the army of Torol Sadeas and Kaladin's military training, the refounded order of Windrunners is well organized and maintains a strong military structure.[37][5] They have ranks for squires, such as CP4 (Commission Placement 4), as they decided to have ranks that someone could earn while advancing as a squire. They felt it would be good to promote squires to different ranks.[4] The Windrunners' resonance has led many of the bridgemen, as well as some others, to become squires,[38][39] making the Windrunners one of, if not the, most numerous of the modern orders. About a year after the Battle of Thaylen Field, the order had roughly three hundred Windrunners, with about fifty full Windrunners.[40]

Having a Windrunner on board a vessel was considered by Thaylen sailors to be a good omen.[41]

“ Now, as the Windrunners were thus engaged, arose the event which has hitherto been referenced: namely, that discovery of some wicked thing of eminence, though whether it be some rogueries among the Radiants' adherents or of some external origin, Avena would not suggest. ”

“ There came also sixteen of the order of Windrunners, and with them a considerable number of squires, and finding in that place the Skybreakers dividing the innocent from the guilty, there ensued a great debate. ”

This article is still missing information. Please help The Coppermind by expanding it.
Retrieved from "https://coppermind.net/wiki/?title=Order_of_Windrunners&oldid=160771"
Categories: