Sigzil is an Azish lieutenant in Bridge Four on Roshar and a Radiant squire to Kaladin.[1] He was previously apprenticed to Hoid and is now a full Worldsinger.[2]

Sigzil has dark brown skin and black hair, but no beard. He is considered average height in Azir, which makes him short compared to most Alethi. He has a Bridge Four tattoo on his forehead.[1]

Despite being incredibly organized and studious, Sigzil thinks less of himself for failing the governmental service exams in Azir. After Kaladin remarks that he believes Azir lost out when they rejected Sigzil but that he is glad they did because it means Bridge Four gained him, Sigzil feels better about the exams. Likely as a result of growing up in Azir, where everything is well-organized, he prefers a clear relationship between himself and whoever he works for, and is somewhat bothered by the fact that his relationship with Kaladin is not a simple one of a clerk and his captain. He also expresses a need to figure out exactly what Bridge Four's chain of command is in regards to Alethi affairs after the beginning of the True Desolation.[1]

Sizil also has a judgmental streak, particularly around disorderly people and when faced with other cultures' less organized and bureaucratic methods. While he was Hoid's apprentice, Hoid tried to teach him to be less judgemental, and he tries to work on it.[1]

Despite his penchant for keeping this organized, Sigzil is not content with only being a clerk, and wants to be the "first into the sky," rather than spending all his time poring over ledgers.[1] He is encouraging and optimistic to his friends.[3]

Sigzil has been trained with the spear and spearmen tactics and was at least aware of military tactics before becoming a bridgeman. He is proficient enough to both train spearmen and lead squads as a part of Bridge Four.[citation needed]

He has sworn at least the First Ideal of the Knights Radiant and is one of Kaladin's squires, which allows him to draw in Stormlight and use the Surges of Gravitation and Adhesion when Kaladin is nearby.[1]

Sigzil was the first person in his family in generations to have a chance at passing the governmental service tests in Azir, which would have given him the opportunity to attend a "real" school, though he later came to consider that a "silly dream," since, as the son of a laborer, he had little time to study. Before taking the tests, however, he got into some sort of trouble and had to be rescued by Hoid, who took him on as an apprentice Worldsinger.[1]

Hoid and Sigzil appear to have travelled to many places on Roshar together, including to Babatharnam, where Hoid had to pay to have Sigzil freed from prison on three separate occasions.[4] While they were on the Shattered Plains, he attempted to kill someone and thought he was successful, though his victim actually survived. This event appears to be what caused him to be made a bridgeman.[5] Sometime after Kaladin joined Bridge Four, he believed that Hoid thought he was dead.[6] 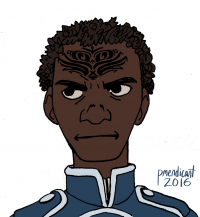 After Kaladin started trying to rehabilitate Bridge Four, Sigzil started off as abrasive and shy, especially about his knowledge as a Worldsinger.[4] Over time, however, he began to warm up and tell stories about far-off places like Marabethia,[5] Yulay,[7] Babatharnam,[4] and Shinovar.[6]

One night, when Kaladin went out wandering on the plains, he crossed paths with Hoid, who was playing his flute. Hoid told Kaladin the story of the Wandersail, before telling Kaladin to take good care of Sigzil and to inform him that he has been graduated and is now a full Worldsinger.[2] When Kaladin tried to ask Sigzil about Hoid, he refused to discuss his former master.[8]

After the Battle of the Tower when Bridge Four transfers to Dalinar Kholin's army, Kaladin promoted him to the rank of lieutenant and appointed the bridge crews' clerk, since he was the only member of Bridge Four who could read glyphs.[9][10]

Sigzil performed experiments using Kaladin as the primary subject to measure and document the extent of his Windrunner abilities.[11]

He was present along with Teft when Sadeas' body was found.[12] Later he approached Kaladin about many administrative issues the crew was facing attempting to convey and idea of responsibility though one of Hoid's story but failing. He brought up problems such as who they, as Windrunners, serve.[1]

Later he organized experiments on the effect the Surge of Gravitation on all of Bridge Four and coached other bridgemen on drawing in Stormlight.[13][3]

This article is still missing information. Please help The Coppermind by expanding it.
Retrieved from "https://coppermind.net/wiki/Sigzil?&oldid=128919"
Categories: