The bridge crews, crewed by men known as the bridgemen, were originally an expendable workforce used for hard labor and cannon fodder. They later become an infantry battalion, but retain the name "bridge crews" as their official unit name.

Under Highprince Torol Sadeas, the bridge crews carry large, heavy bridges in order to allow his soldiers to cross the chasms of the Shattered Plains.[1] The bridgemen consist mainly of slaves, deserters, thieves, foreigners, and some men who joined because they had nowhere else to go.[2] The bridgemen were treated as expendable and incurred heavy casualties with every bridge run.

The bridge crews are later transferred to the control of Highprince Dalinar Kholin, where they become a battalion of soldiers in Kholin's army. In this capacity, they are commanded by Captain Kaladin Stormblessed, with Bridge Four as its premier unit and headquarters. 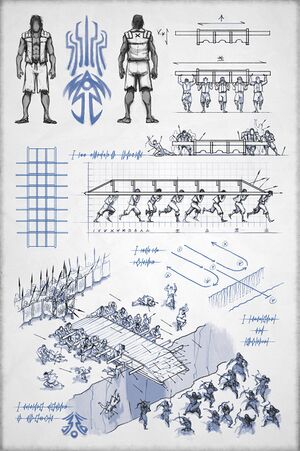 The unique geography of the Shattered Plains required the armies to cross many chasms to reach the battlefields. Highprince Torol Sadeas employed a large number of bridgemen to transport his army's temporary bridges. The bridgemen were also used as cannon fodder for the Parshendi bowmen.[3]

The bridgemen were split into 40 bridge crews, each carrying one bridge.[4] Each bridge crew was comprised of approximately 35-40 men.[1] The most notable crew was Bridge Four: initially known for being the worst crew with the highest casualty rate,[5] they are later noted for their excellence and innovation to bridge warfare while under the command of Kaladin.[6]

Gaz was the bridge sergeant, reporting directly to Brightlord Lamaril.[7] After Lamaril is executed, Brightlord Matal takes nominal command of the unit, although his wife Brightness Hashal is the one who is actually commanding the unit.[8] Within each bridge crew, the men appointed their own bridge leader, but they lacked an overall command structure or allegiance to anything except their own self-preservation.

During hunts for gemhearts, bridgemen will carry the bridge and place it to the next plateau. While the army is crossing the bridge, they have time to rest, but they will need to run and get ahead of the army once everyone passed. During such runs, positions in the front is preferred because of fresh air and better sight. Bridgemen will take turns for positions in a fair manner. However, if the next plateau is occupied by Parshendi forces, bridge crews will face heavy fire and almost always suffer heavy casualties because they act as easy targets to attract fire away from the main forces. Positions at the rear, which is better shielded against arrows, is preferred in this case, although the survival rate is very poor for every position. People who refuse to follow the rules will be forced to run in the front. Bridge leaders have power over the position arrangements.[7][citation needed]

In normal times, the bridge crews act as man power and do various unwanted duties in the war camp. Among them is the chasm duty, which requires people to scavenge for weapons, armor or spheres from the chasms.[9]

Following this, Highprince Kholin offers money and freedom to every member of the bridge crews, along with the opportunity to join Kholin's army as soldiers.[11] Very few bridgemen take Kholin's offer to leave, and Kholin is left with a full thousand-man battalion.[4]

After the bridge crews are freed by Kholin, they all immediately recognize Kaladin as their leader.[11] Highprince Kholin formalizes this by appointing Kaladin as their commander with the rank of captain.

Captain Kaladin re-organizes the bridge crews into twenty platoons of fifty men each, with each platoon named from Bridge One to Bridge Twenty, in memory of their previous life.[4]

Bridge Four, Kaladin's original bridge crew, becomes their premier unit as well as headquarters platoon. Initially, forty members (two from each Bridge) are chosen to be trained directly by members of Bridge Four. These forty members are then seeded back to their original Bridges, promoted, and help train the remainder of their Bridges, with assistance from Bridge Four.

Under Captain Kaladin's command, the bridge crews have implemented a number of innovations to warfare.

Due to Kaladin's background in medicine, he has trained some members of the bridge crews in battlefield medicine, leading to the first deployment of combat medics on the battlefield.

Kaladin also creates a modernized command structure for the bridge crews. A typical Alethi army is organized around a very small number of lighteyed officers with a moderate amount of "citizen officers," the Alethi term for a non-commissioned officer.[12] Since the bridge crews have no lighteyes, and also because Kaladin believes this command structure to be lacking, he creates the position of lieutenant between himself and the sergeants who lead platoons. Additionally, he is considering expanding the size of his non-commissioned officer corps by adding the additional rank of "master sergeant."[4]

This article is still missing information. Please help The Coppermind by expanding it.
Retrieved from "https://coppermind.net/wiki/?title=Bridge_crew&oldid=161125"
Categories: