Gaz is a Lightweaver and a member of the Unseen Court on Roshar.[3] He was the sergeant in charge of the bridge crews in Sadeas's warcamp.[4] 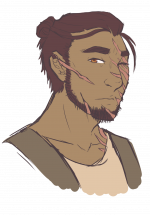 Gaz has a beard, but his face is scarred, so it only grows in patches. He is very short for an Alethi man. At some point Gaz lost an eye, but it is unknown how.[5] His remaining eye is brown. Gaz did not wear an eyepatch over his missing eye[4] until he joined the crew of deserters.[6] He was a darkeyes of the sixth nahn.[7] Upon becoming a Lightweaver, he used Stormlight to regrow his missing eye.[2]

He didn't like his role in the Sadeas camp, since he was responsible for so much suffering. He hated himself for it, but he'd hated himself for a long time and got used to the idea that it was needed for him to survive.[8] Once he joined Shallan's crew, he changed; he did want to become a better man and start over.[6] He found his sense of humor and became loyal to her.[9] Later, at Urithiru, he lost his good mood and felt useless. He was not happy about that.[10]

As a Lightweaver, Gaz can use the Surges of Illumination and Transformation.[3]

The Soulcaster enters (or partially enters) the Cognitive Realm to convince the sentience of an object to change materials, transforming it into something else if successful. Some transformations are more basic than others, with more complicated transformations requiring a more skilled Surgebinder and more Stormlight.

Lightweaving deals in illusions. It involves the manipulation of waves of sound or light and has a strong Spiritual component requiring a certain measure of Connection and a full mental picture of the desired illusion. 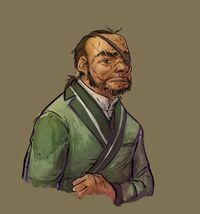 The Bridge runs at the War of Reckoning[edit]

Gaz was a bridge sergeant responsible for the bridgemen at the Sadeas warcamp. He takes new recruits to fill the different bridge teams due to constant loss.[4] He is also responsible for making sure they do their duties, leading them to their bridge runs and showing them the way.[11] He had to make sure order was kept and that the rules are followed.[12]

The rules for bridge crews were primarily made to keep them down and in despair, but also included some simple encouragements like rotation of the bridge positions to keep them from becoming too angry. One of those was looking down on the bridge group with the worst "luck", which was Bridge Four. When Kaladin joined and began leading the crew like a real team, he changed the balance between bridge crews and caused resentment among the others. Kaladin convinced Gaz that to avoid being hated by others, he could change their duties to a harder task (stone gathering).[13] Gaz accepted but was convinced he had been tricked (which he had) and then increased the "punishment" to chasm duty.[14] Lamaril was Gaz's immediate superior and a low-ranked lighteyes who was blackmailing him. Though Gaz had used Kaladin's bribes to stay ahead of payment, Lamaril threatened to make him a bridgeman if he did not stop Kaladin and the changes in spirit of Bridge Four. Gaz agreed to bring Kaladin down without making him a martyr.[8]

He found the opportunity when he saw Kaladin practicing the side carry with Bridge Four. He knew disaster would come as a result of the tactic and encouraged Kaladin to use it. When Bridge Four used it in battle, they did survive, but they disrupted Sadeas's overall strategy and caused the Alethi to lose the battle. Lamaril and Gaz nearly killed Kaladin immediately, but Kaladin convinced them that he had more value to them alive; Lamiril ordered his soldiers to beat up Kaladin instead.[15]

The consequences of the battle were bad for everyone. Not only did the Alethi lose the battle, but also over 200 bridgemen died, Lamaril was executed, and Kaladin was punished by being strung up during a highstorm.

Brightlord Matal took over Lamaril's duty and his wife Hashal took command and became Gaz's immediate superior. He was treated even worse, taking command and duties from him.[16]

One day Gaz stopped showing up in the warcamps, and no one in the camps seemed to know where he was.[17] 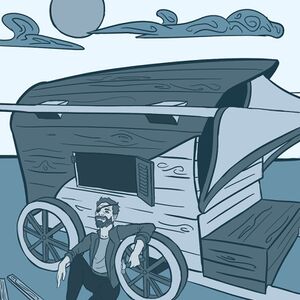 by EccoS
Sitting next to a wagon after deserting

Shallan encounters Gaz with a group of deserters in the Frostlands. He had fled the warcamps due to unspecified debts to debtmongers.[18] She urges them to become better men and start over by helping the people in the caravan she was traveling with, who were being attacked by bandits. Gaz is the first one to join her, wanting to have a fresh start and become a better man.[6]

After the battle ended, they stayed with her under the promise of protection and a fresh start. Gaz looked genuinely happy and became very servile towards Shallan, even working on a window for her wagon. When confronted with the possibility of her not being able to protect him, he decided it was better than life as a deserter.[7]

When they got to the Shattered Plains, Shallan got them a writ of pardon sealed by the king himself. He joined her and the rest of her crew to Sebarial's camp.[19] He continued being loyal to her and did simple tasks like visiting libraries searching for books or accompanying her on her travels.[20]

During their stay in Urithiru, Shallan did not pay much attention to her guards and crew. They lost the spark and became lazy. It was Adolin who started giving them duties to help them feel useful.[21] Unfortunately, Shallan didn't buy into it and kept ignoring them. The crew went down to 12. Gaz was among the ones who stayed, but he just spent his time playing cards.[22]

When Shallan finally realized she could use them and they needed the tasks, she asked them to help her to spy. Without telling them her identity, she accompanied them as Veil.[23] Though tasks didn't last long, she continued to visit them. It was clear Gaz still liked gambling and would have gone broke again if his crew was not controlling him.[10] Later Veil used Ishnah to train Gaz, Red and Vathah in spying.[24] This group eventually became the Unseen Court.[3]

Gaz and the Unseen Court embedded themselves in Ialai Sadeas's warcamp. After they captured Ialai, Gaz and Red searched her bed chamber and uncovered handwritten notebooks and letters.[2]

Gaz was present in Urithiru during the singer invasion.[25] 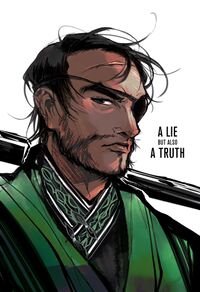 Gaz met Kaladin when he was brought to the Shattered Plains as a slave. Kaladin tried to explain he had been a soldier, hoping to become one here, but Gaz made fun of him and started calling him "Lordling". Kaladin despised him for not looking over the bridgemen or providing them with the proper gear. Gaz felt the same for Kaladin for not dying in the first bridge run.[4]

When Kaladin went to the chasm to commit suicide, he met Gaz, who didn't show him sympathy, but asked him to leave his vest and sandals. When he came back though, he threatened Gaz stating he had just died and could not be harmed, thus demanding to become bridge leader, asked for his wages and bribed him with one mark out of five for his efforts of "staying out of his way".[26] After that, Gaz goes white every time Kaladin goes closer to him but is manipulated giving Kaladin the space he needed.[27]

Though he needed the bribes, he was forced by his immediate superior Lamaril to bring Kaladin down, which ended up causing the latter to be hung up during a highstorm.[8] When Gaz came back as Shallan's bodyguard, he and Kaladin saw each other again. Kaladin was still angry and Gaz ashamed.[28]

Shallan was able to get the best out of Gaz. She inspired him to become a better man.[6] He became truly loyal to her and felt pride on getting things done for her.[20] When Gaz saw the portrait she made of him, he shed a tear.

“She tidied up his uniform, smoothing out his paunch, taking liberties with his chin. Most of the difference, however, had to do with the expression. Looking up, into the distance. With the right expression, that eye patch became noble, that scarred face became wise, that uniform became a mark of pride. She filled it in with some light background details reminiscent of that night beside the fires, when the people of the caravan had thanked Gaz and the others for their rescue. ”

—Shallan's actions and thoughts when making his portrait.[29]

—Gaz every time he got new recruits.[4]

“I hate myself for being a part of this. But he'd hated himself for a long time now. ”

—Gaz to himself on thinking on his role as bridge crew sergeant.[8]

“I liked being useful. Reminded me of back when I first joined up. You tell her, Veil. Tell her to give us something to do other than gambling and drinking. Because to be honest, I ain't very good at either one. ”

—Gaz to Veil on asking Shallan to give them tasks.[10]

This article is still missing information. Please help The Coppermind by expanding it.
Retrieved from "https://coppermind.net/wiki/Gaz?&oldid=158287"
Categories: