Brightness Hashal is a lighteyed woman in the Sadeas warcamp on the Shattered Plains of Roshar. She is married to Avarak Matal, an officer in the Sadeas army, and she personally takes an active role in the oversight of the Sadeas bridge crews.[1]

She has pale blue eyes.[1] She styles her dark hair in a complex weave decorated with infused gemstones[2] and she wears ruby-red nail polish.[3] She wears heavily embellished silk havahs in colors such as deep red and violet.[2][1] Her freehand is "delicate" and her general appearance is that of someone important.[2]

Hashal is imperious, vindictive, and ruthless. She flaunts her wealth and influence, and is transported through the warcamps by palanquin.[1][3] She is highly elitist, and regards darkeyed people and even lighteyes of a lower dahn as beneath her, if not subhuman.[1] She places no value on the lives of bridgemen and will never change her mind about them.[3]

She has a smooth, aristocratic Kholinar accent, implying that she hails from the Alethi capital.[2][1] She is able to write in women's script.[2] She and her husband are of a high dahn, perhaps the fourth or fifth,[2] and are close associates of Highprince Sadeas.[1]

“I can see what I am purchasing, slaver. I will inspect them myself. ”

Hashal lived on the Shattered Plains with her husband during the War of Reckoning. She met with Tvlakv seeking to buy some slaves from him for timber production. She intimidated Tvlakv, and quickly bargained his price down. As she inspected the slaves, manhandling some of them, she was intrigued by Kaladin's physique and his shash glyph. Kaladin offered to serve as a soldier, but Tvlakv immediately identified him as a deserter. Kaladin lashed out at him, startling Hashal. Hashal bought a number of the slaves, assigning some to forest duty but taking Kaladin and nine others that he was thought to have "corrupted" to Lamaril and Gaz to serve as bridgemen, instructing the officers that Kaladin should be given "special treatment".[2]

“My husband does not intend to run the bridge crews with his predecessor's laxness. My husband is a well-respected and honored associate of Highprince Sadeas himself, not some near-darkeyed mongrel like Lamaril. ” 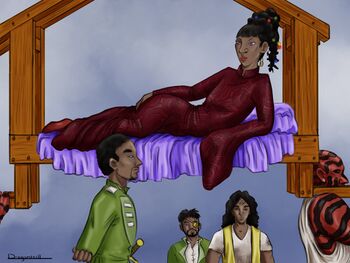 by Dragontrill
Riding a palanquin carried by parshmen while her husband, Kaladin, and Gaz watch.

Lamaril was executed after the disastrous first battle with Bridge Four's side carry,[4] and Avarak Matal requested to become the captain of the Sadeas bridgecrews, a move presumably initiated by Hashal.[1] Hashal disparaged Lamaril and immediately took over scheduling and crew assignments so that she could target Kaladin and Bridge Four with punitive actions.[1][5] She discontinued the policy of assigning crews to different types of work duty, instead assigning Bridge Four to permanent chasm duty.[1] Even though she knew that Bridge Four was severely undermanned, she stopped assigning them new members, only giving them the parshman later known as Shen as an "experiment".[5][6] She started forcing Bridge Four to perform scavenging on the same days as bridge runs.[7] After Gaz deserted his post, Hashal personally began giving Kaladin and the other bridgeleaders their schedule each morning.[8][9] She pointedly ignored any questions concerning Gaz's whereabouts.[9] Since Bridge Four had still not broken, she started making them take part in every bridge run[3] and increased their scavenging quota to add more stress, barely allowing them to sleep.[10]

“Your team is just too good. It must be used. You'll start full-time bridge duty tomorrow. Consider it an ... honor."”

Kaladin realized that Hashal would not be swayed by logic or reason, as her only goal was to kill off Bridge Four.[7] The men of Bridge Four believed that she had been ordered to treat them so harshly by Torol Sadeas so that he could rid himself of Kaladin, who had attracted a large amount of attention for surviving outside in a highstorm. Kaladin's frustration with Hashal contributed to one of his early experiences breathing in Stormlight.[3] Bridge Four continued to survive despite Hashal and Avarak's efforts to undermine them. This presented Hashal with a quandary, as the crew was earning the couple accolades from Sadeas (including a promotion for Matal), preventing her from removing Kaladin as their leader.[10][11] Hashal took credit for the innovation of using singer carapace as armor; Kaladin was able to deceive her regarding its rarity, reducing the crew's scavenging quotas. She ignored any questions about the armor's origin.[11]

After the Battle of the Tower, when Bridge Four saved Dalinar Kholin and some of his men despite Sadeas's betrayal, Kaladin suspected that Matal would be held responsible and executed, just as Lamaril had been before him.[12] However, the fate of Matal and Hashal is not known.

Although Avarak is the captain of the bridge crews by title, he is a figurehead. He usually remains silent while Hashal speaks for him, except on the battlefield where women are not present.[3][13] Hashal and her subordinates make token references to her husband's wishes,[5][1] but Hashal is clearly in charge of scheduling, discipline, and other regulations.[10] Hashal seems to be more ambitious than Avarak, but he is a willing participant in her schemes,[10] and also comes to hate Kaladin and Bridge Four.[14] Although lighteyed Alethi women typically take their husband's last name, it is not clear if Hashal has done so.

This page is complete!
This page contains all the knowledge we have on the subject at this time.
Big Smooth (talk) 16:46, 7 April 2021 (UTC)
Retrieved from "https://coppermind.net/wiki/Hashal?&oldid=160829"
Categories: