Shardplate is an ancient and magical[1] type of full-body armor found on Roshar. Infused with the power of Stormlight, it enhances the strength, dexterity, and speed of the wearer.[2] The precise origin of Shardplate has been lost over time[3], though some believe that it was a gift from the Almighty[citation needed]. At least some of the ancient Knights Radiant gained it somehow upon swearing their order's Fourth Ideal.[4] The power of Shardplate is provided by a continuous infusion of Stormlight from gemstones attached to the armor's interior, suggesting that Shardplate may be some sort of fabrial.[3]

A set of Shardplate is constructed of individual pieces that, when assembled, protect the entire body. There are no gaps between sections of the armor, only increasingly small overlapping Plates.[5] Shardplate helms have visors with eye slits that may be lifted up to expose the face. Although similar in appearance, each individual suit of Shardplate has a unique look[6][7] and, because it conforms to the shape of its wearer,[8][7] the same suit may appear unique on different individuals. The natural color of Shardplate is slate-grey,[2] similar to unfinished steel.[3] In current times, however, it is extremely common to change the appearance of one's Shardplate by painting it or adorning it with decorative details or even gemstones--all Alethi Shardbearers except Dalinar do so.[2]

Shardplate worn by Radiants of the past is said to have shone brightly with the glow of Stormlight and with glowing glyphs.[9][5][10] It also appears likely that Radiants were able to control their Shardplate with more precision--for example, Dalinar notes several times with perplexion that both the male Windrunner's and female Stoneward's Plate in one of his visions abruptly change from being helmed to unhelmed.[9]

Suits of Shardplate can weigh over 100 stoneweights (1400 pounds, assuming the modern real-world definition of stone).[11] 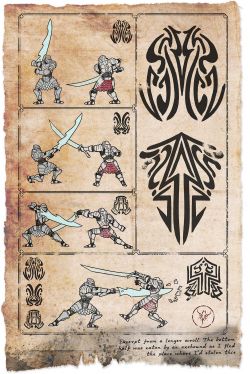 by Isaac Stewart
A section of scroll, collected by Nazh,depicts a Shardbearer successfully using Ironstance.

There is some manner of bond between Shardplate and its wearer, that will disappear if the owner of the Plate is to die.[12] The augmented abilities of Shardplate are fueled by Stormlight from gemstones attached to the inside of the armor. Cracking sections of the armor causes Stormlight to leak out; eventually, the Stormlight can be depleted entirely, rendering the armor useless and the wearer immobile. In situations of extreme stress, the gemstones may crack.[13] Ten gemstones, larger than broams, power every set of Plate.[13] Five are beneath the breastplate[1], and one is in each sabaton.[5] If worn by a Surgebinder, the Plate will automatically feed off their Stormlight to power itself.[14]

Shardplate provides protection from impact caused by a weapon or from a fall.[2] The individual wearing the Plate is able to feel impacts from within the armor, but their force is greatly reduced. The sensation of touch, however, is transferred through the fingers of the gauntlets, allowing the wearer to feel fine detail.[15]

Shardplate differs from ordinary armor in that it can stop blows from Shardblades. This capacity is not unlimited, as shardweapons can still crack and even break the Plate with repeated blows. But Shardplate is one of the few materials that can block or resist a Shardblade strike to any degree, apart from another Shardblade or a half-shard.

Shardplate does not dent or bend. Instead, sections of the armor can crack after heavy or repeated impact and will eventually fail.[1] When a section of the armor fails, it will explode into bits of molten metal. Damaged sections will leak Stormlight. While enough leaks will deplete the gemstones and cause the armor to lock up, individual leaks, even large ones, will eventually "seal over" on their own, preventing further loss of Stormlight, even if the damage hasn't fully healed yet.[16]

Shardplate also greatly enhances its users' strength and speed. It provides the ability to jump great distances,[5] heave objects of great weight, and run at high speeds. The strength that is granted by Shardplate is such that Dalinar Kholin is able to catch a chasmfiend's swinging foreclaw and hold the creature at bay long enough for Adolin to further weaken it.[17] The extra support of Shardplate can assist the wearer in overcoming physical injuries that might otherwise leave them incapacitated.[18] Shardbearers require extensive training to be able to control this strength and move smoothly without damaging everyday objects.[2][19]

Agility and dexterity are increased by Shardplate. A person armored in Shard acquires faster reflexes and is more responsive in battle.[11]

The Shardplate helmet has a face shield with a horizontal eye slit for visibility. When lowered, the shield becomes translucent to the wearer, but not totally clear, similar to dirty glass. The eye slit is therefore still needed for full vision, but even the partial translucence is very useful.[17] In some instances, the face shield can adapt to protect the wearer's vision from the brightness of a lightning strike.[20] It is implied that when closed, the edges of the visor meld into a single, unbroken surface with the rest of the helm in a small puff of mist.

Shardplate has the ability to use Stormlight to regenerate itself when damaged.[16] If sections of a suit of armor are destroyed or abandoned, they can be regenerated later by using Stormlight from the suit's gemstones. Once the Shardplate regenerates an abandoned piece, the previous piece will crumble to dust. [15] If someone got a small piece of a shardplate, they can feed it stormlight and try to grow the whole plate back, but the original owner with bigger portions of the plate could feed it more stormlight and would usually win in the growing competition. Repairing a heavily-damaged set of Shardplate can be costly, as it commonly cracks the gemstones used during the process.[21] Through some unknown method, common spheres may also be used to recharge and reinforce drained Plate.[15]

Due to its heavily Invested nature, Shardplate protects the user from most forms of Investiture, including Surgebinding. It is not possible to use any lashings against someone armored in Shardplate. It is also not possible for a wielder of an Honorblade to Surgebind while wearing Plate, due to interference from the gemstones.[1] At least some of the original Knights Radiant were able to Surgebind while wearing their armor.[9]

As the technology used to create Shardplate has been lost, a limited number of suits exist. The only way to acquire a set of Shardplate is from another person. This can be done through battlefield combat, by dueling,[22] by borrowing it from the owner or by inheritance.[2] It is common for Shardbearers to loan their Plate to others. Even the King's own Shardplate can be borrowed at a heavy price.[11]

Because of its weight, Shardplate cannot be donned without assistance. The Shardbearer often has a team of armorers to assist with putting the armor on.[23] The armor must be applied from the ground up, starting with the sabatons, or the wearer would be unable to support its weight.[5] Regular clothing, boots, and additional padding are worn underneath the Plate. When applied, each individual piece of Shardplate tightens to fit itself to the contours of the wearer.[5][23]

Removal of Shardplate is done in pieces; the wearer can mentally command each section to release and fall away. Damaged sections can be shed during battle. In order to eliminate the need to remove one's entire set of Shardplate during extended battle, other soldiers provide assistance with the toileting needs of the warrior in Plate. Sometimes, however, such assistance is not available, and Shardbearers have been known to relieve themselves inside their armor.[24]

Although most suits of Shardplate known to exist are possessed by the human inhabitants of Roshar, Parshendi used to own Shards, though they have lost most of them in battle with the Alethi.[18] 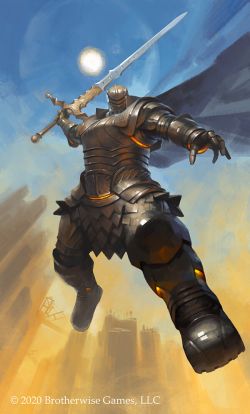 by Petar Penev
A Shardbearer leaping into battle

Although incredibly strong, Shardplate is not invincible. Repeated impacts to the same areas can cause that piece of the armor to crack and leak Stormlight,[25] depleting it at a higher rate.[8] Once the Stormlight is exhausted, the armor will "freeze up" and be rendered immobile.[21]

Individual sections of Plate can be cracked to the point of failure. Upon failure, the piece of armor explodes into bits of molten metal, leaving that area of the warrior exposed. A Shardbearer can remain in combat with some pieces of armor missing, but, for example, destroying a greave can incapacitate a Shardbearer by rendering them unable to support the armor's weight.[11][8] Also, the breastplate is a central support structure for Shardplate; destroying the breastplate alone will cause the armor to stop functioning fully, making it difficult to move the limbs.[15] It is possible to stand up from the ground with a broken breastplate, but the maneuver requires some experience with Plate.[23]

In close combat, the single most vulnerable spot on Plate is the eye slit. With luck or skill, or by somehow restraining the Shardbearer, a knife, arrow, or spear can be stabbed through the slit; at that specific spot, many wounds will be instantly fatal.[26] When charging against arrows, shardbearers usually cover their eye slit with their arms to prevent lucky hits.

There are also a number of tactics that can be used by prepared enemies against Shardplate. The armor is incredibly heavy; though it will protect the wearer from a fall, the fall can still damage the Plate. One tactic used against Shardbearers is to force them to fall a great distance, either by directly pushing them over an edge[27] or by putting them in a position where their great weight, or perhaps some other mechanism, will cause whatever they're walking on to fall apart, dropping the Shardbearer.[1][28]

Massive, blunt projectiles can also be used against Shardplate. At the Battle of the Tower, listeners use two-handed slings to hurl head-sized rocks at Dalinar; a single blow is enough to make cracks in an unharmed section of Plate.[25]

Bladed or pointed weapons (arrows, spears, swords) typically don't carry enough force to damage Plate, but if Plate is already cracked and an edge catches it, the blow can widen the crack. It's conceivable that a Shardbearer, used to ignoring spear strikes that would normally barely scratch their paint, might be unprepared to respond to an effective use of this weakness.

Shardplates are made out of a mixture of the unnamed godmetals of Honor and Cultivation. The precise proportion of the two differs depending on the type of spren that forms the Blade, or the order to which the Plate belongs; as such, there are at least ten alloys.[31][32][33] Like all godmetals, they are Allomantically viable, and thus burnable by a Mistborn, although it's yet to be seen what the effects would be.[34] Presumably, they would also have Hemalurgic and Feruchemical effects.[35]

This page is probably complete!
This page contains most of the knowledge we have on the subject at this time.
It has yet to be reviewed.
Retrieved from "https://coppermind.net/wiki/Shardplate?&oldid=130608"
Categories: