Helaran Davar is a Veden Shardbearer on Roshar.[2] Helaran is the oldest child of House Davar, with four younger siblings: Balat, Wikim, Jushu, and Shallan. Originally known as Nan Helaran Davar, identifying him as the first son and heir of House Davar, he is stripped of the title Nan when his father disowns him. 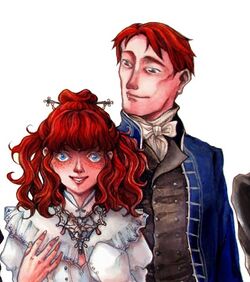 by botanicaxu
With Shallan
For more images, see /Gallery.

“Helaran's grin was so wide, it practically glowed. It was hard to frown in a room where he was smiling. ”

—Shallan's thoughts on her brother.[2]

Helaran is tall, muscular, and square-chinned, although his father is taller than he is.[2]

Of all the Davar children, he is considered to be the most responsible and the only true adult, even after his younger brother Balat comes of age. He and Shallan are his father's favorite children.[3]

Helaran is resentful and angry at his father, who he believes murdered his mother and her lover in cold blood.

His mother had intimate contact with a Skybreaker acolyte and it is possible Nale knew a member of the house was close to bonding a spren. It is believed they thought it was Helaran. He was recruited because Nale was impressed with him. They recruited him with displays of great power and Shards.[4] Helaran had not yet bonded a spren and so his Shardblade still had a glowing gemstone. Likely, Helaran was sent to kill Amaram as a test—either that or he took it upon himself as a way of proving his worthiness for knighthood.[4] 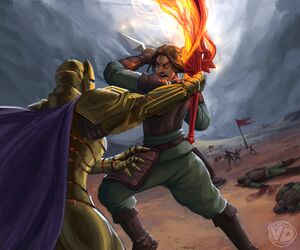 by Vedtom
Helaran on the Alethi battlefield, moments prior to being killed by Kaladin

Around 1168 or shortly before, Helaran acquires a Shardblade from the Radiant Order of the Skybreakers.[2]

Later that year, he visits Shallan and brings her sketching tools from Northgrip as a present. He had also given Balat a new axehound pup, but Balat had abused and possibly killed it. During the visit, he tells Shallan and his father that he must leave to attend to affairs, but his father disagrees and confronts him. Helaran summons his Shardblade, threatens his father, and leaves, but promises to return and check on the family.[2]

After this confrontation with his father he visits the Davar estate sporadically and for only short periods at a time, bringing Shallan more drawing supplies but avoiding his father.[3]

Of all the Davar children, he knows the most about his father's secrets and plans and stands up to him the most. He has some connection to Wit, whom he asks to deliver the message that "he has eyes nearby and is watching". Upon hearing this, his father declares him disinherited and start referring to Tet Balat as Nan Balat, thereby naming Balat the eldest son.[5]

Two years later, he returns to Jah Keved and meets with Balat. Helaran warns his brother that this time when he leaves, he might not be coming back for a long time, and asks him to watch over the family. When his father finds out, he sends one of his new guards, Rin, to kill him.[6]

In 1172, he appears on a battlefield in Alethkar with a full set of Shards. Helaran's goal is to kill Highlord Meridas Amaram, but he is killed by Kaladin during the battle.[1] Although it is Kaladin's right to claim Helaran's Shards, Amaram betrays Kaladin and claims the shards instead.[7][8][9][10] 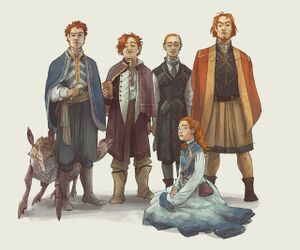 by Marie Seeberger
With his siblings

Helaran is protective of Shallan. He encourages her drawing, as he believes her to have the potential to be great at it.[2] After leaving, he continues to send her gifts, including Jasnah Kholin's book and high quality paper for her drawings.[11]

Shallan looks up to her brother and feels that her rightness comes from him, from "the best person she knew".[12]

She wants to find information on his past and motives, but doesn't make much progress until after becoming affiliated with the Ghostbloods.[4]

When Helaran leaves the house for the first time he doesn't think Balat is ready to lead their brothers.[2] However, several years later, before leaving to the war at Alethkar, he does ask him to watch over his family. Balat considers Helaran to be strong and brave and doesn't consider himself to be as good as he.[6] When Helaran and Balat are together, Balat "puffs up" and acts more confident.[13]

—Helaran to his father before leaving house Davar [2]

Helaran is sure his father killed his mother and her lover. He confronts him as he leaves his house.[2] Even though they don't see each other again, they grow further apart; Helaran sends him a message stating that he has eyes nearby, and is watching, causing him to be disinherited and to lose his title of Nan.[5] Later, Lin Davar finds that Helaran talked to Balat and sends a guard to kill him.[6]

The reason behind Helaran's attempt on Amaram's life is unknown; however, Mraize of the Ghostbloods believed the attack was a strike against the Sons of Honor.[4]

This article is still missing information. Please help The Coppermind by expanding it.
Retrieved from "https://coppermind.net/wiki/?title=Helaran_Davar&oldid=158075"
Categories: