From The Coppermind
Jump to navigation Jump to search
This page or section needs to be updated with new information for Oathbringer!
Be aware that in its current state, it does not include this additional content yet.

“The Purelake was life itself. ”

The Purelake is an area of land located in north central Roshar[2] that is covered in a shallow lake.[1]

While the people of the Purelake are ethnically Selay, they refer to themselves as Purelakers. 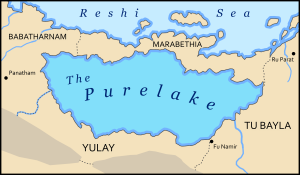 Map of the Purelake by User: Otto didact

The Purelake is a large lake that has an average depth of about midcalf, with its greatest depth being around six feet.[1] Its surface was typically calm and crystal clear, despite the tides. It was hundreds of miles wide. The lake bottom had small ridges and sharp ledges of rock.

It was separated from the Reshi Sea by the nation of Marabethia.[2] The Purelake bordered the nations of Tu Bayla, Yulay, and Babatharnam.

The weather of the Purelake is exceptionally warm.[1] The temperature only lowers in a highstorm. The Purelake is so far west that highstorms are considerably weaker than in eastern Roshar,[3] it is possible to remain outside while they occur. During a storm the Purelake drains into holes and pits in the ground. Those outside would simply take shelter behind a ridge and wait the storm out.

The Purelake is home to many species of fish, such as the kolgril and stumpy cort.[1] It also contains cremlings and spikemane. Riverspren are also common in the Purelake. The Investiture in the fish does not come from Honor.[4] 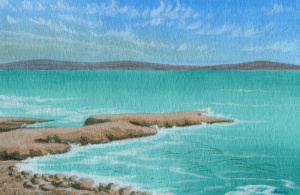 In his youth, Dalinar Kholin traveled to the west of Roshar and visited the Purelake,[5] but he'd never had a chance to see the center.[6] The Azish were surprised that he would want to go there.[6]

Several Worldhoppers, including Galladon and Demoux, likely members of the Seventeenth Shard, visited the Purelake while hunting for Hoid, possibly following a false trail he left for them.[7]

After the Battle of Narak Dalinar receives information that a plague is affecting the Purelake.[8]

The overwhelming personality trait of the Purelakers was a happy-go-lucky attitude.[1] Any misfortunes were spoken of with happiness and amiability. They often moved slowly and deliberately, thinking of their actions and enjoying the day.

The Purelakers were also rather unconcerned with the notion of exact time, and did not understand why foreigners cared so much about it. As a whole they were rather unimpressed by foreigners, believing that they were constantly in a hurry and acted oddly due to the fact that they got too little sun. They did not understand why no foreigners would come to the Purelake to live, but they really did not want too many to come to the Purelake anyway.

Many Purelakers were fisherman, who nomadically traveled the Purelake in search of rare fish. Most everyone also had a raft of some sort that they pulled behind them to carry things or sleep on.

Purelakers typically wore sandals when in the Purelake, never boots or anything that kept their feet from feeling the water.[1] Their pants were also only knee-length, to keep from getting wet. The men of the Purelake also never wore shirts.

The name of the Purelaker religion is as of yet unknown. They worshiped a god known as Nu Ralik.[1] However, according to mythology, Nu Ralik had a younger brother, a jealous god known as Vun Makak. The Purelakers felt that they had to appease Vun Makak by pretending to worship him. They believed he was the source of all their misfortunes, but pretended to praise him for them. They often voiced gratefulness for Vun Makak's curses. The only time they were free to worship Nu Ralik aloud was in one of their holy grottos.

The tides of the Purelake were also believed by some to show the lake's attitude, as well as predicting the future.[1]

The Purelakers also believed that ingesting certain types of fish would grant supernatural healing or other abilities.

The Purelaker buildings have the appearance of rockbuds, with domed roofs. They are among the few things to break the surface of the Purelake.

The buildings of Purelakers are typically set up on blocks or stilts. However, they are still set a few inches below the water level, keeping the floor covered in water, with fish swimming in and out. The buildings sometimes drained during the highstorms.

Purelakers speak Selay[1], which itself is part of a language family including those spoken in Iri, Reshi, and the rest of northern Roshar.[9] They have a variety of unique sayings, often related to weather, the lake, or religion:

Sayings related to the gods use Vun Makak when spoken aloud but Nu Ralik when used in one's thoughts.

This article is still missing information. Please help The Coppermind by expanding it.
Retrieved from "https://coppermind.net/wiki/Purelake?&oldid=104911"
Categories: