They include the islands of Kadrix, Quili, Abri, Arak and Sumi.[1] According to Dalinar's memories the people of the Akak Reshi were destroyed.[2]

One of the smaller islands is home to the ardents Geranid and her husband Ashir.[3] 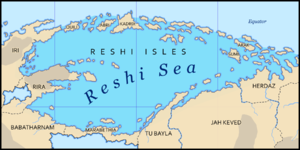 by User: Otto didact
A map of the Reshi Sea

The weather of the Reshi Isles is warm and overwhelmingly humid. The rainfall on the Reshi Sea often forms a misting haze.[4]

The Reshi are described as having black hair, tan skin and rounded features.[5] They speak Reshi, which is a language sounding like barking. They are a relaxed people, living a simple life, though not every Reshi is carefree and prefers lounging to fighting.[4]

They know much of foreigners, but are not aware of the current economic situation on the mainland, so they only trade with people they trust and respect during the trading season. With outsiders seeking out the place and trying to exploit them, they grow tired of those who bring goods of low quality.[4] Despite this, they are capable of sending messages to distant locations, as Talik was able to tell Vstim in advance that he should bring goods to trade for a larkin corpse.[4]

The relatively relaxed culture of the Reshi Isles attracts foreigners to the isles as permanent residents.[4] According to Vstim, relocating to the Tai-na called Relu-Na requires giving all you own to their king.[4] It is unclear if this is standard practice for all of the Reshi Isles, or just for this one.

As indigenous populations, the Reshi have no real concept of assassination and war.[6] To them, battle is more about yelling and posturing than actual killing. When trading, a Reshi judges the other trader as they would judge a rival in battle.[6][4]

The Reshi worship Tai-na as their gods. They believe that the Tai-na approve of boldness, and interpret the movements of the Tai-na as divine will. They use bundles of fruit as offerings.[4] They appear to observe taboos of some sort regarding discussion of the spren that inhabit Tai-na, as Axies the Collector warns Rysn not to "ask about the soul of their god."[4]

Reshi standard clothing includes wrap and tassels. Swimmers like to walk about unclothed.[4] In parts of the Reshi Isles, some women don't even wear tops due to the hot weather.[7] The king of an island is dressed in full, voluminous robes and the soldiers wear crustacean breastplates and armguards carved with points.[4]

All the Reshi furniture is flat and long. There are no chairs, just cushions.[3]

This article is still missing information. Please help The Coppermind by expanding it.
Retrieved from "https://coppermind.net/wiki/?title=Reshi_Isles&oldid=153252"
Categories: