The Shattered Plains are located on the border of the Frostlands and Unclaimed Hills, formerly part of the Silver Kingdom of Natanatan.[1][2] They are aptly named, as the terrain of the Plains consists of huge numbers of plateaus of various sizes, surrounded on all sides by deep chasms. It is unknown what caused the landscape to form this way, but during Kaladin's dream he saw the entire area as a symmetrical pattern, radiating outwards from the center as if something massive had struck there.[3] 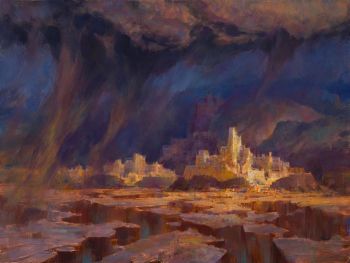 by Bryan Mark Taylor
A view of the Shattered Plains

The western edge is ringed by ten circular craters.[4] Each crater's ridges have been worn away by highstorms where they connect to the Shattered Plains themselves.[5] It is noted by Dalinar that from above, it is clear that the craters are the remains of large domes.[6]

The edge of the Plains consist of smaller plateaus with chasms ranging generally from 50 to 150 feet in depth. These westernmost plateaus can be bridged easily, and many permanent bridges have been constructed joining them together. Moving eastward, the Plains become much more varied in size and the chasms themselves can become much wider making crossing from one to another much more challenging.[7] The eastern edge of the Shattered Plains are so weathered by storms that they consist mostly of spindly pillars of rock, making them impassable.[8][9]

On the eastern side of the explored portion of the Plains is a particularly large plateau known as "the Tower". The Tower is a favored location for chasmfiends to pupate.[10]

It is noted that highstorms are particularly bad on the Shattered Plains, garnering it this area of the world 'the Stormlands'[11], as there is no shelter on top of the plateaus, and the chasms often flood. The Plains are also on the eastern side of Roshar, where the highstorms are strongest. For these reasons, the Plains are not an optimal place to experience a highstorm outdoors.

Some accounts describe the Plains as looking as if something enormous had struck the center causing the Plains fracturing to radiate symmetrically in all directions. Claims of lights in the center plateau were the Parshendi live have also been recorded.[3] 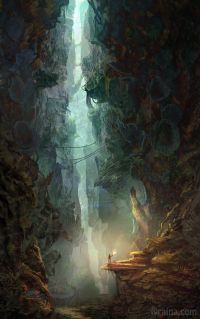 by Lyraina
The rich ecosystem within the chasms.

The area around, on, and in the Shattered Plains has a large variety of plants and animals. The most dangerous being the apex predators: Chasmfiends. However, Shallan Davar believes the Alethi have hunted them near to extinction for their enormous gemhearts.[6]

The climate is moister than it is the west. Plants have a tendency to not pull into their shells as swiftly after a storm.[15] Clouds are less frequent; alternating between sun and highstorms.[16] Outside the warcamps, rockbuds, knobweed[15], flowering branzah[17], prickletac[17], pink and purple fingermoss[18], and other grasses are known to grow. Due to the harsh weather, the grasses near the Shattered Plains are typically yellow in color and only grow to 6-10 inches in height.[19]

During Shallan's travels to the Shattered Plains she notices feral axehounds, small eels living in ponds, and white trees with red leaves.[20] There is also a small, tentacled, animal that lives in pools near the warcamps, called a 'grasper'.[18]

Out on the plateaus themselves, rockbuds, moss, and shalebark are the most common plants.[5] Shallan notes that the moss and common flowering rockbuds grow in similar patterns.[21]

Within the chasms is a different environment all together. The chasms are more humid and damp than the rest of the Plains, with stagnant pools where cremling larvae grow.[9] Haspers[22][23], mosses, fungi, and frillblooms[24][25] all grow on the walls and in crevasses in the chasms. Translucent cremlings have been seen[26], along with larger carrion animals that are sensitive to light.[9]

Prior to the War of Reckoning, the only known permanent inhabitants of the Shattered Plains were the listeners, who occupied the ten craters on the western edge of the Plains.[27] During the war, the craters were occupied by various Alethi armies fighting the Parshendi under the Vengeance Pact. The Plains and the surrounding area are so barren that the warcamps are perhaps the only places where it is acceptable to pile refuse up high and allow the highstorm to carry it away, as there is no danger of the trash being carried into another city.[28]

The listeners resided in the ruins of Stormseat, which they call Narak, during the War of Reckoning. After the Battle of Narak, the Alethi claimed the city for themselves. The homes of the listeners are now barracks, and a watchtower has been erected on the tower where 'the five' met.[29] 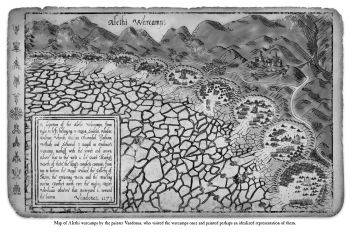 The Alethi have occupied the crater-like areas of the Plains and constructed ten warcamps, a royal palace, and a market. The palace complex includes the royal residence, Gallery of Maps, feasting basin, and a dueling arena.[30]

The warcamps are each a mixture of Soulcast buildings, shanties, and tents that are taken down before each highstorm.[17] Each camp is self sufficient, with their own markets, taverns, brothels[31], and spanreed information stations to Tashikk.[32] Most of the buildings are Soulcast using topaz.[33] The bunkers and barracks are typically long and narrow with a smaller end facing the highstorms to the east.[34]

The Outer Market was a collection of buildings outside the warcamps, near the king's palace. The buildings here were mostly constructed of stone quarried from near the Plains. It expanded in a sprawling way, without plan or order. It became a place where people from all warcamps mingled and shopped from the Thaylen merchants. The market was largely unregulated but was patrolled and administered by Kholin scribes.[35]

While the warcamps weathered the Everstorm quite well, eight of the ten warcamps were evacuated and abandoned after the Battle of Narak--their occupants either moving to Urithiru or disappearing into the Unclaimed Hills.[6]

The princedoms from north to south:

Roion
Sadeas
It is known as one of the least ordered and respectable warcamps, as opposed to the well-maintained and designed Kholin warcamp. Prior to the evacuation to Urithiru, Sadeas controlled the forests north of the warcamps.[15]
Aladar
Kholin
The barracks of this warcamp are organized into radials, with meeting areas, mess halls, and at the center of each battalion.[31] These battalions then circle Dalinar's stone bunker complex and the living quarters of other ranking lighteyes and generals.[36] The Kholin warcamp has more bunker-like construction than other warcamps, as Dalinar wanted his soldiers to remember they were at war.[6]
After moving most of the camp to Urithiru, Dalinar left a few platoons and some workers in this warcamp under the leadership and administration of Brightness Jasalai.[6]
Location of the Ornery Chull.
Vamah
Ruthar
Thanadal
Hatham
Bethab
Sebarial
It is a very technologically advanced camp for the area. It has running water, although muddy water will run for the first few seconds.[37] Highprince Sebarial's goal is to become the only camp that produces food and utilities and have a monopoly. His camp is dedicated less to the training of military and more to the production of resources. After the evacuation to Urithiru, Sebarial claimed the nearby forests[6] and is transporting lumber across the Plains to Urithiru.[38]
Shallan Davar stays with Highprince Sebarial.[39] She is very impressed by the situation of the camp, as it does not reflect what Jasnah reported.

Since the relocation from the Shattered Plains warcamps to Urithiru, ownership of the Plains and the Oathgate has become extremely important and strategic to the success and survival of the inhabitants of Urithiru. Urithiru is not self-supporting yet, and resources are required from the warcamps to supply the city. Farming operations have begun in the Unclaimed Hills[40], but due to the climate, rockbuds grow smaller and crops are less productive than in Alethkar.[6] The Fused are harrying caravans traveling to the Oathgate.[38]

This article is still missing information. Please help The Coppermind by expanding it.
Retrieved from "https://coppermind.net/wiki/?title=Shattered_Plains&oldid=127610"
Categories: