The Unclaimed Hills is a geographical region in eastern Roshar that contains the Shattered Plains.[1]

The Unclaimed Hills lie in the east of Roshar, covering the northern part of the greater region of the Frostlands. They form the eastern border of Alethkar and stretch all the way to the shores of the Ocean of Origins, while to the south, they gradually flatten out. Their most notable geographical feature is the Shattered Plains, which occupy the southern portion of the area.[1] 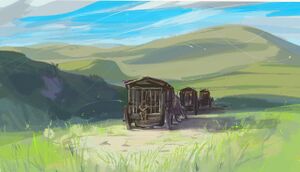 by Marie Seeberger
A slave caravan riding into the Hills

The Unclaimed Hills get their name from their uneven terrain. Some hills are little more than mounds; others are far taller.[1] They are rocky, covered with tough, retractable grass stretching as far as the eye can see. On occasion, this green monotony is broken by spiny plants such as wild blackbane and an unnamed shrub with thick stalks and spiny green needles, but there are no trees or any taller vegetation.[2][3]

The whole region is highly exposed to the highstorms, making the plants skittish. At any sign of movement, they retract, leaving behind only brown stone.[2] Most of the Hills' fauna stays hidden, only revealing their presence after a highstorm. Then, one can find numerous cremlings, leggers and slugs coming out to drink the water.[3] Though the land is arable, it would be difficult to farm it properly -- rockbuds grow small, and crops give little yields.[4]

The Unclaimed Hills are, as their name indicates, held by no nation, and sparsely inhabited. The Shattered Plains were once occupied by the listeners, though during the War of Reckoning, their presence is reduced to the plateau of Narak, while the edges are taken over by the Alethi military.[5][6] The Hills themselves are home to a small population of the Natan people.[7]

What cities there are lie mostly on the the ocean coast.[3] Most of them are small and independent, and nominally Vorin, although their adherence to the doctrine -- particularly in terms of the prohibition on slave trade -- is far looser than in the western nations.[2] The largest among them are the city-state New Natanan and a settlement called Dawn's Shadow.[1]

After the Alethi move onto the Plains, several plans are made to reinhabit the land. Initially, Dalinar Kholin proposes homesteading the area and adding it to the Alethi territory, though that plan is stopped before it can be fully put in place by the coming of the Everstorm.[8] Later, Navani Kholin suggests building a new kingdom there after Alethkar falls to the voidbringers, but the idea is discarded on the account of how difficult the region is to farm.[4]

Back during the Heraldic Epochs, the territory now known as the Unclaimed Hills was split between the Silver Kingdoms of Alethela and Natanatan.[9] It's possible that the final battle of the Aharietiam was fought in a canyon within the Hills -- Stormfather would later bring Dalinar into a memory of it through a vision.[10]

Following the splintering of Alethela and the destruction of Natanatan, the land slowly dropped in importance. It's possible there was another kingdom there at some point; however, by the late Era of Solitude, the region was essentially uninhabited, traversed only by travellers, hunters, bandits and, on occasion, listeners venturing out of the Shattered Plains.[11] In the absence of people, beasts, including the chasmfiends, flourished.[7]

Rediscovery and the War of Reckoning[edit]

Several expeditions were sent out into the Unclaimed Hills in search of a river passage to New Natanan.[12] Following the unification of Alethkar, Gavilar and Dalinar Kholin went on their own hunting trip there, whereupon they encountered the listeners and discovered the Shattered Plains -- and on them, chasmfiends, the source of the listeners' gems.[13] Initially, the relations between the Alethi and the listeners, dubbed Parshendi by the humans, went well, but on the night of an important treaty between the two, the listeners chose to assassinate Gavilar to stop him from releasing their gods.[14] As a result, the Alethi moved onto the Shattered Plains and began to wage the War of Reckoning against the listeners.

The return of human population to the Hills brought with it an increase in both trade and banditry. Slavers and criminals flourished in the difficult, uninhabited wasteland, and the highprinces were either uninterested or incapable of stopping it.[15] Though the Alethi had plans for reinhabiting the Shattered Plains fully, those were put on hold, first by the war and then by the beginning of the True Desolation.[8][16]

As the Everstorm began circling the globe, the Alethi focused on the defending the Shattered Plains, in particular the area around the Oathgate in their center.[4] The Hills remained simply a place people travelled through, whether to escape or on their way to and from the Plains.[17]

This article is still missing information. Please help The Coppermind by expanding it.
Retrieved from "https://coppermind.net/wiki/?title=Unclaimed_Hills&oldid=154610"
Categories: