The Heralds were the leaders of Honor's forces during the Desolations. They were responsible for teaching mankind skills to help them prepare for the coming conflict. For example, Jezrien taught leadership, Vedel trained surgeons, and Kalak taught how to cast bronze.[4] They were also each the patron of a Radiant order and helped to guide and lead the Knights. They were involved in combat, with Taln in particular becoming known for his choice of impossible battles that he won.[5] In between Desolations, the Heralds were the ones on Braize holding back the Fused. They had made the Oathpact with Honor which gave them the honorblades and the ability to hold back the Fused. However, a loophole in the Oathpact allowed them to bend and temporarily allow the Fused to Roshar, leading them to getting captured and tortured on Braize.[6]

The first Desolation occurred when mankind invaded Roshar. Humans had destroyed their previous home with surgebinding and came to Roshar seeking shelter.[16] The singers granted them the land that would later become Shinovar. Dissatisfied with what they had been given, the humans decided to invade the rest of the continent.[17] This was the first military conflict between humans and singers. A singer who witnessed the invasion wrote the Eila Stele as a warning against trusting humans.[16]

Some of the singers that were killed by the invading humans were infused with power by Odium before they passed Beyond. These singers became the Fused, Cognitive Shadows that possess living singers and could not be killed.[6][18] Ishar founded the Oathpact as a solution.[19] He and the other nine people that would become Heralds made a pact with Honor to seal the Fused on Braize. Taln was not originally meant to join the Heralds, but somehow became part of the group. The Heralds thought the Oathpact would end the endless war, but because they are human, there was a loophole. The Heralds had the ability to bend their oath and let the Fused return to Roshar, starting a Desolation. Knowing this loophole, the Fused captured and tortured the Heralds.[6] 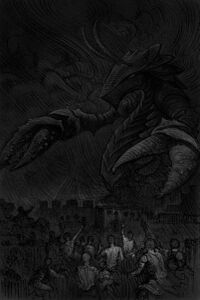 “In the aftermath of each one, mankind was broken. Great cities in ashes, industry smashed. Each time, knowledge and growth were reduced to an almost prehistoric state. ”

Humankind was devastated in the aftermath of each desolation. Casualties were generally severe; in one desolation, ninety percent of the population of Nohadon's kingdom died. This mass death lead to the fall of many nations, with some—such as Sur, Eiliz, and Tarma—wiped out so thoroughly that they disappeared from history altogether.[20] This level of cataclysmic event pushed men to a technology level equivalent to that of the stone age. Although society would sometimes progress beyond that before the next Desolation began, the Heralds would often be forced to push technology forward thousands of years in the single year after their return.[25] It is the duty of the Knights Radiant to stay vigilant and prepare themselves and mankind for Desolations, and to fight the Voidbringers when it arrives.[11]

At the end of what is called the Last Desolation, nine of ten Heralds managed to survive the fighting, which was an unusual occurrence. Fearful of the torture they would face on their return to Braize, the Heralds chose to break the Oathpact rather than return.[6] Although they had been warned that lingering on Roshar would lead to another Desolation, Ishar told the others that Taln alone would be enough to maintain the Oathpact. Whether or not this was true mattered little to the Heralds as they only wished to avoid torture. The Heralds left their Honorblades in a circle and all walked in a different direction, telling people that humanity had finally won the war for good.[26] Ishar's prediction turned out to be true, and Taln held back the Fused for 4500 years while mankind believed there would be no more Desolations.

The True Desolation began approximately two thousand years after the False Desolation, when Talenel appears at the gates of Kholinar, after returning to Roshar from Braize.[21] Not all that long after, at the Battle of Narak, Stormform Listeners summon the Everstorm, which appears to begin the True Desolation.[38]

“The Desolations had happened during the near-mythical shadowdays, before real history began. Before mankind had defeated the Voidbringers and taken the war to heaven. ”

This article is still missing information. Please help The Coppermind by expanding it.
Retrieved from "https://coppermind.net/wiki/Desolation?&oldid=165473"
Categories: