The Order of Stonewards is an order of the Knights Radiant on Roshar.[1]

The Stonewards were Surgebinders who used the Surges of Cohesion and Tension, and they are associated with the topaz polestone. The patron Herald of the Stonewards is Talenel. In Shadesmar, the spren of the Stonewards, peakspren, look like stone and their skin cracks when they move.[2]

Those who join the Stonewards generally subscribe to a philosophy of team dynamics, on learning to work with others, and on being there for those who need them.[3] The core tenet of the order is be there when needed. They seek to take a difficult situation with few resources and make something better of it. The order strives to exemplify resolve, strength, and dependability.[1] They tend to attract those who are most interested in warfare, prowess with weapons, or athletics of any sort.[3]

The Ideals of the Knights Radiant, also known as the Immortal Words, are a set of rules by which the Radiants live. The First Ideal is shared by all of the orders, and is used as a motto for the Knights Radiant as a whole. Each of the orders then have an additional four Ideals that are unique to that order.[4] The Ideals of the Order of Stonewards all focus on working with a team and supporting others, which led them to put others' interests before their own. Of the orders, they were some of the least likely to bend their Ideals.[3]

“Life before death, strength before weakness, journey before destination ”

A possible second Ideal for Stonewards is "I will stand where others fall".[5] 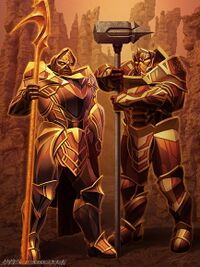 “The Shardbearer pressed his hand against the incline leading up to the Voidbringer, and again the stone seemed to writhe. Steps formed in the rock, as if it were made of wax that could flow and be shaped. ”

—Dalinar's observations of a Stoneward in a vision[6]

The Stonewards use the Surges of Cohesion and Tension. Like most Knights Radiant, the Stonewards have squires.[7][8]

Cohesion allows them to manipulate or alter objects at a molecular level.[9] Their exact Powers are so far unknown, but they are able to reshape stone to some extent.[6] This ability lets them reshape things other than stone, but not flesh or anything even slightly Invested.[10]

Tension allows them to alter the stiffness of an object.[11][12] Stonewards are able to control the hardness of an object, allowing them to harden clothing into weapons, and have the ability to shape stone at their will.[13] Much like Cohesion, Tension is highly resisted by Investiture.[10]

The glow of their Shardplate is amber.[14]

The ancient Stonewards were the infantry and the ground troops of the Knights Radiant; alongside the Windrunners, they were considered the finest soldiers. They tended to attract people interested in warfare, but also challenge, prowess with weapons, and athleticism. Throughout the world, they were widely known for being dependable, strong and filled with resolve, but also stubborn to a fault and prone to taking on projects larger than themselves. This attitude was said to be a good representation of their patron Herald.[3][1] They took pride in this -- to be there when they were needed was a core tenet of their order.[3]

In battle, they served as the frontline troops.[15] In times of peace, on the other hand, they were often explorers, but also sportsmen, often organizing and engaging in various competitions and events.[3]

“Now, as each order was thus matched to the nature and temperament of the Herald it named patron, there was none more archetypal of this than the Stonewards, who followed after Talenelat'Elin, Stonesinew, Herald of War: they thought it a point of virtue to exemplify resolve, strength, and dependability. Alas, they took less care for imprudent practice of their stubbornness, even in the face of proven error. ”

“As a Stoneward, I spent my entire life looking to sacrifice myself. I secretly worry that this is the cowardly way. The easy way out. - From drawer 29-5, topaz. ”

This article is still missing information. Please help The Coppermind by expanding it.
Retrieved from "https://coppermind.net/wiki/?title=Order_of_Stonewards&oldid=160779"
Categories: