Thunderclasts are giant stone monsters from Roshar that serve Odium during the Desolations.[2][3]

“Even after all these centuries, seeing a thunderclast up close made Kalak shiver. ”

Thunderclasts are enormous stone beasts, easily five or six times larger than a person, with their hands alone being six feet long.[1][2] They take a skeletal, humanoid form, with long limbs that end with spiky, clawed fingers. On their chests, they have rib-like protrusions, and there are ridges running along their backs.[4] Their heads are narrow and arrow-like, with glowing red eyes.[4][5]

The thunderclast proper, however, is a Cognitive entity of some kind, significantly larger and more twisted than a Fused soul. When seeing one in a vision, Dalinar assumes that it is a spren[4], but during the Battle of Thaylen Field Venli assumes it to be a singer soul. She was not entirely correct, as thunderclasts are different from Fused.[6] When they desire to take on a physical form, they sink into the stone and animate it, ripping themselves out in the humanoid form.[3] As such, they retain some qualities of the material they take on, like the color or a covering of moss or fungus.[4] 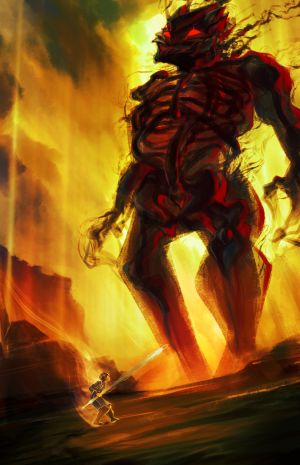 Despite their enormous size, thunderclasts have no problems staying upright, and can swing their body around with incredible force, easily toppling regular fortifications.[7] Though brute force is their greatest strength, they're also capable of precise actions such as throwing boulders,[8] or carrying regular Fused in their hands without crushing them.[7]

Although warped and twisted, thunderclasts seem to retain some level of personality, enough so to answer to names and have a concrete sense of their gender. While they can obey commands, however, they do not seem capable of communicating themselves.[9] They are capable of making earth-shaking roars and trumpeting sounds to express their emotions, though.[10]

Despite being made of the same material as their targets, they do not crack, and it seems they cannot be destroyed by ordinary means, although hammers are given as a viable option for combating them.[7][4] Another viable way to deal with them is to cut them up with Shardblades to the point where they're no longer mobile, although this carries significant risk to both people and their surroundings. Indeed, Adolin theorizes that killing thunderclasts was in fact the original purpose of Shardblades, an idea mirrored by Szeth's thoughts on them.[11][10] Nightblood can kill them for good.[9]

While it's unknown for how long they've been in Odium's service, thunderclasts date back to the Desolations of old, even back to Nohadon's times.[1] People back then knew to look out for them, and sent out hunting parties, although only Knights Radiant were capable of fighting them.[4] They were powerful enough to pose dangers even to the Heralds, with Kelek in particular dying to them several times.[2] After the Aharietiam, however, thunderclasts passed on into myths. By the Era of Solitude, there were numerous stories about Voidbringers with bodies of stone, likely as a cultural memory of the thunderclasts.[12][13]

Thunderclasts appeared a few times in Dalinar's visions. When he met Nohadon, he saw numerous corpses of them littering the battlefield and, in a separate vision in which he participated in a hunt for a corrupted spren on the Purelake, he witnessed one rip itself out of the ground.[1][4] However, they didn't make their proper debut in the modern era until the Siege of Kholinar, when at least one thunderclast participated in the main attack, easily breaking down the city wall and decimating numerous buildings in its wake.[8][14]

In the Battle of Thaylen Field, Odium called two singer souls -- Kai-garnis and Yushah -- to create thunderclasts. After Yushah broke through the wall, he sent her after the Thaylen Gemstone Reserve while Kai-garnis went to assist the Fused in taking the Thaylen City Oathgate. Both were eventually defeated; Yushah was destroyed permanently by Szeth with Nightblood,[15] while Kai-garnis was immobilized by Renarin and fled her stone body.[9][10]

This article is still missing information. Please help The Coppermind by expanding it.
Retrieved from "https://coppermind.net/wiki/Thunderclast?&oldid=165794"
Categories: