“I think life is fair. It's merely that often, you can’t immediately see what balances it." ”

Nohadon was a historic Rosharan king and Surgebinder who lived during the Heraldic Epochs. He's most famous as the author of The Way of Kings, a philosophical treatise in the form of a collection of stories.[3]

"Nohadon" is not his real name, but rather a holy honorific given to him by the Vorin ardents thousands of years after his death[4] (under Vorin rules, the letter "h" can stand in for any other letter, making "Nohadon" perfectly symmetrical and thus holy).[5] Elsewhere, he is known as Bajerden or Behardan, though whether this is his original name is uncertain.[6][4]

In his youth, Nohadon had dark hair, which he wore pulled back into a braid, and a short, pointy beard.[4] It can be presumed he was lighteyed.[7] As he got older, his hair went gray and he gained numerous wrinkles, but the pointy beard remained.[2] When dressed as a king, he had golden threads winding through his hair, coming together on his forehead in the shape of the Knights Radiant symbol, and wore white-and-gold robes with voluminous sleeves.[4]

Young Nohadon was an angry, exhausted man, likely due to having just suffered through a war. He was uncertain of himself and his goals, and sought advice on statecraft from his advisors. At some point, he even considered abdicating the throne. Nonetheless, he had a clear vision of what he wanted to accomplish: to have the Surgebinders serve people, rather than rule over them. He believed that he had to enforce this, even if he had to go to war to do so.[4]

In his older age, Nohadon became significantly more glib, whimsical and better-natured, having greatly matured over the decades. He had a wry, somewhat sarcastic sense of humor, and a charitable nature, chatting with common citizens and giving food out to the poor. He enjoyed the simple pleasures of life, like chatting with his people or shopping. He didn't hesistate to use his powers for the most banal things, like jumping several stories out the window rather than climbing down the stairs. He was, in fact, very cavalier with his safety, never taking guards with him even when going out of the palace. Nonetheless, he was sombre when recalling the dark events of the past, and had no problem dispensing wisdom he had gathered over the years.[2]

Nohadon is implied to have been an absolute monarch.[8] His ability to completely rebuild a ruined kingdom over several decades implies considerable amount of administrative talent. Additionally, he was capable of projecting military power across vast distances, being able to take a large scout group all the way to the foothills of the Misted Mountains, on the opposite side of the continent.[2]

He was a Surgebinder from a young age,[4] and was said to be considered special among them,[9] suggesting that he may have been a Bondsmith.[10] Nonetheless, he possessed enough ability to easily survive a jump from a considerable height. He also appears to have had some knowledge of Realmatic Theory, as he educates Dalinar on the existence and nature of Physical, Cognitive and Spiritual Realms in a vision.[2]

Most famously, Nohadon was a philosopher-king. His best-known work is The Way of Kings, but it's implied that he wrote several other texts on logic and philosophy.[11]

He was also a gifted haggler, and knew how to make Shin loaf bread, both of which were apparently his hobbies.[2]

Nohadon was a king of the country that would eventually become Alethkar.[12] He became a Surgebinder early in his life, and took the throne young, during a Desolation that lasted for eleven years, killing nine out of ten of his subjects. This, and a prior conflict with another Surgebinder named Alakavish who also started the conflict, left his kingdom in ruins and him jaded to the point where he considered abdicating.[4] He eventually attempted to unite other Surgebinders by force, but failed. This forced him to find a different, more peaceful path.[2]

As decades passed, Nohadon rebuilt his kingdom, until eventually it became a bustling, colourful place. At some point, he went to war over access to trade routes of Makabak, which took him near the border of Shin Kak Nish. He would stay there for a long time, in a house of a woman who would later meet a tragic fate. It was then that he learned to bake Shin bread, a habit he enjoyed during later years of his life.[2]

Around that time, Nohadon started a family and made his famous journey from Abamabar to Urithiru. He walked alone, without any guards or attendants, and no money, instead making a living through singing and manual labor.[6] The trip took a very long time - the lowest number given is sixty days, and that was when he was still within his own lands - and when he eventually made it to Urithiru's gates, he was all but unrecognizable.[13][6]

In his old age, Nohadon remained in his capital, the city now known as Kholinar. He would often take walks outside of his palace, shopping and haggling without any guards.[2]

“Sometimes, a hypocrite is nothing more than a man who is in the process of changing.”

Nohadon appeared in two of Dalinar Kholin's visions. The first vision was one of the regular ones, sent by the Stormfather during a highstorm, and cast Dalinar in the role of Karm, an advisor to the king. In it, Nohadon shared his anxieties about ruling, and his frustration with other Surgebinders. The vision was important mainly thanks to the very last thing Dalinar said in it, which was a sentence Navani recognized, allowing her to begin the translation of Dawnchant.[4] Later, Dalinar brought Venli into the same vision in an attempt to parlay with her.[14]

The second vision was far stranger, ocurring without Stormfather's input while Dalinar was asleep. In it, Dalinar spoke with older Nohadon, and walked through the city with him. Unlike the regular visions, here Nohadon was keenly aware who he was speaking to, and referenced things that had happened to Dalinar before. While this, as well as the vision's dramatic end, imply that this was a nightmare, Nohadon talked about things Dalinar didn't know at the time, such as the three Realms or the ancient conflict near Shin Kak Nish, suggesting that this might've been the real Nohadon, or some preserved memory of him.[2] 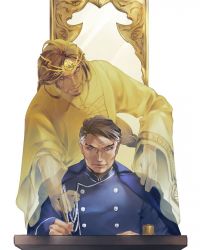 by botanicaxu
For Nohadon's famous book, see The Way of Kings (in-world).

The Way of Kings is the oldest preserved text in Roshar's human history. Among others, Gavilar and Dalinar Kholin were heavily impacted by it in their middle age, as it led them to rethink their life philosophy and, in Dalinar's case, led to him becoming a Bondsmith.[6][15] Nohadon's influence, however, spreads far beyond Alethi royalty. He's one of the most influential writers in the history of Roshar, with his texts being read and analyzed by scholars to this very day. His name is immediately recognizable for people who study ancient history, logic and philosophy.[16][11][1]

It's highly possible that Nohadon had a hand in organizing the Surgebinders into the Knights Radiant, as the ancient Knights were said to have based their philosophies and ideals off The Way of Kings.[1]

He's one of the few people to ever be praised by the Stormfather, with the great spren considering him to be "a good man".[13]

This article is still missing information. Please help The Coppermind by expanding it.
Retrieved from "https://coppermind.net/wiki/Nohadon?&oldid=165734"
Categories: