“The world is changing outside, but the Shin seem determined to remain the same. ” 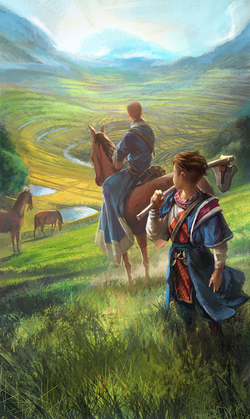 by Adam J. Marin
A farmland in Shinovar

“The entire landscape had an eerie feel to it, as if it were dead. Nothing moved. ”

Lying on the western side of continental Roshar, Shinovar is bordered to the east by the Misted Mountains and to the west by an unnamed mountain range. Multiple rivers flow through Shinovar from the bodies of water to both the north and the south. The Misted Mountains prevent Shinovar from bordering any other nations.[2] The mountains also protect Shinovar from the worst of the highstorms, so Shinovar experiences far more mild highstorms than the rest of Roshar. Regular storms also occur in Shinovar, particularly during the summer, and it can be difficult to tell the two apart based on strength.[3] The highstorm still recharges gems with the same amount of Stormlight despite its lower strength.[4] Spren rarely manifest in Shinovar, though that is unrelated to highstorm strength.[5]

Shinovar has a vastly different ecology from the rest of the planet, as the flora and fauna there have not the need of adapting to survival in the highstorms. Much of the ecology there is based on the plants and animals brought to Roshar by the Ashyn refugees.[6] The ground in Shinovar is coated with a layer of soil, making the ground feel springy to outsiders. The entire land is coated with a thick layer of grass that does not move or react to movement. The trees dotting the landscape are straight upward with leaves that do not withdraw into the trunk. [1] Plants that are known to be farmed in Shinovar include wheat,[7] strawberries,[8] and grapes.[9] Animals that live in Shinovar include chickens and horses. Horses are both domesticated and wild.[10]

Buildings made of clay and earth seem to be common in Shinovar, as they remind Szeth of his home in the Valley of Truth. This is motivated by the Shin's beliefs that stone is sacred and cannot be used as a building material.[10] The weakened highstorms likely make this form of building viable when it would not be in other parts of Roshar. Shinovar contains an Oathgate somewhere inside the country, though its exact location is not known.[11]

When humans first arrived on Roshar from Ashyn, the singers gave them the land of Shinovar to settle in. Because it is sheltered from highstorms, humans were able to grow the plants and animals they had brought with them there. Humans, however, decided to expand from the land they were given.[6] During the Silver Kingdoms, Shinovar was known as Shin Kak Nish.[12] Nohadon claims to have been in a war near the Shin border.[13] Shinovar seems to have been less isolationist then, as they had a working Oathgate and Shin people among the Knights Radiant.

After the Last Desolation, the Shin took control of the Honorblades and brought them to Shinovar (save for Taln's Blade, as it was with him on Braize).[7] Because of this history, they consider themselves the only ones who remember the truth about Rosharan history, though what they remember might not be entirely accurate.[14] Nale came back and retrieved his at some point without informing the Shin leaders.[7] Members of the Shin use and train with the Honorblades and surges.[15] During the Era of Solitude, the Shin tried multiple times to conquer all of Roshar, but they did not succeed any time.[16] They used Honorblades, Surges,[17] and cavalry, a fighting technique unfamiliar to the rest of the continent.[18] Shubreth-son-Mashalan was likely a leader during one of the invasions.[19] Approximately seven years before the True Desolation, Szeth announced that the Voidbringers were returning.[20] He was told by the Shin leaders that this was false, made Truthless, and exiled, taking Jezrien's Honorblade with him.[21][22] He was traded to Vstim, a Thaylen merchant who often traded successfully with the Shin, and exiled from Shinovar.[1]

After the Everstorm hit the first time, the Shin sent warnings to other countries, including Tashikk, to prepare them.[23] Dalinar sent word to them through a Thaylen merchant asking them to cooperate with his planned coalition.[24] The Shin were considered particularly important allies to gain because they controlled the westernmost Oathgate on continental Roshar.[25] When they received his message, the Shin declined to join, sending back only a congratulations to Dalinar.[26] While the Shin did not join the coalition, they also did not join Odium and were considered uncommitted by the end of the Battle of Thaylen Field.[27]

The way Shinovar is governed does not seem to be well known outside of Shinovar, even to other monarchs like Taravangian.[26] They have multiple leaders who Szeth views as corrupt for falsely making him Truthless.[28] Other countries tend to view them as barbarians. When it comes to foreign policy, the Shin tend to be isolationist, declining to join Dalinar's coalition of countries when the Everstorm hit.[26][27] This policy is due to their xenophobic nature.[29] The Shin leaders are involved in making someone Truthless.[30][28] As the Stone Shamans are also involved in monitoring the Truthless, it is possible they are part of the Shin leadership.[10]

The Shin, natives of Shinovar, have round faces and are one of few ethnicities on Roshar whose eyes lack epicanthic folds. These features give them a wide-eyed look that, to outsiders, makes them appear to resemble young children.[31] The Shin also have lighter skin than people in other parts of Roshar and are often described as pale.[32] The average Shin is shorter than the average Alethi.[33] Their distinctive features are the result of them being xenophobic and not intermixing with other races very much.[29] The Herald Ishar looks Shin.[34]

The Shin have a distinct naming scheme, seemingly unique to their culture. A person is identified first by their given name, then as either son or daughter, and finally their parent -- father for men, possibly mother for women.[10][35] As such, a Shin would have a name like Thresh-son-Esan (Thresh, son of Esan) or Ali-daughter-Hasweth (Ali, daughter of Hasweth). In extraordinary circumstances, one can use the name of their grandparent instead, so as to avoid dishonoring their parent. One example of such a case is Szeth-son-son-Vallano, meaning "Szeth, son of the son of Vallano".[10] The same pattern is applied to the names of Heralds in the Shin culture, with Honor being considered their parent -- Nale is known as Nin-son-God.[30]

The Shin have an extremely strict social structure based on profession. High on the social ladder in Shinovar are the farmers, who add to the land by growing plants and are as such considered holy. Each farmer is given the title he who adds and is referred to as such by other Shin. Farmers spend their days either working their fields or exercising their power to oversee negotiations, during which they wear fine, multicolored robes that tie in the front. The robes seem designed for horseback riding, as the robes reach almost to the ground from horseback. Farmers are able to own and trade warriors by way of stones similar to Oathstones.[36] Because of their holy nature, outsiders are not allowed to visit farming villages or farmland.[1]

Traders and merchants are lower in status than farmers, and are required to be supervised by the latter during certain transactions, as when trading with foreigners. They wear colorful capes to signify their status, and they may also ride on horseback.[1]

“Here, warriors are the lowliest of men—kind of like slaves.”

Warriors are all viewed extremely poorly in Shin culture. To a Shin, since warriors exist only to destroy, they are far below the farmers and craftsmen who live to create, and even merchants, who trade in other's goods. All warriors are required to obey totally the person who holds their stone, voluntarily subjecting themselves into a state not unlike slavery. While a Shin warrior is able to distinguish his stone, it does not appear to be remarkable in any other way--their subjugation appears to be entirely voluntary. As a rule, Shin warriors cannot be given to outsiders, and the rules regarding the trading of warriors inside Shinovar are unknown. What is known, however, is that any person who picks up a weapon is required to take a stone and live the rest of their life as a warrior. Warriors are recognizable by the simple brown clothing they wear.[1]

Only the Truthless are considered lower than warriors in the Shin culture. At present, there is only one Shin Truthless, and there are not likely to be more in the foreseeable future. Truthless are exiled from Shinovar, and required to live the life of a Shin warrior outside of Shinovar. They are required to have a master, but are not allowed to seek or avoid a particular master, freely sharing information about their servitude to any who asks (assuming that a current master has not given contradictory orders). The precise nature of the offense that makes one Truthless is unknown.

The Shin follow Stone Shamanism. They believe stone to be sacred and that their soul is given to the stones upon their death, where they continue to exist.[10] They consider walking upon stones to be a heresy, and derogatorily refer to those who do as Stonewalkers. The stones of Urithiru are the one exception to this, as Urithiru is a holy site.[20] Similarly, mining in stone is considered to be a heresy. Because of this, metal is very valuable in Shin territory, with the Shin preferring Soulcast metal above mined metal because of the inherent blasphemy in obtaining the latter. Shin won't trade for fabrials apparently for religious reasons.[1] They called the period of darkest night between the first two moons the "hateful hour" and believed it was the only time their gods didn't keep watch over them.[10] Farm villages and farmland are considered holy, with outsiders not being allowed to visit them.[1]

“Never try to cheat the Shin. Be forthright, tell them the truth, and—if anything—undervalue your goods. They will love you for it. And they’ll pay you for it too. ”

When it comes to trading, and as a result of their humble nature, haggling with the Shin usually involves both parties devaluing their wares to the other, until an agreement can be reached. The Shin value and reward honesty in negotiations. This unique attitude towards trading means it can be difficult for merchants to understand how to get a good deal from them. Vstim is one of the few Thaylen merchants to understand them, so he often gets good deals. Shin are known for raising and trading chickens, an animal unique to this region of Roshar. They also commonly trade horses, cloth, and dried meats.[1] They are famed for their horses, and many varieties of fruit, such as strawberries, can only grow in the soil of Shinovar.[8] In exchange, the Shin want metal, particularly Soulcast metal that does not require mining stones to get.[1]

The Shin have their own language, which is part of the Dawnate family derived long ago from the Dawnchant. It shares grammar with other languages in the Dawnate family, like listener and Horneater, but the vocabulary is vastly different because of how long ago the languages diverged.[37] Unlike languages spoken in the east, the Shin have multiple words for different kinds of chickens.[38] The Shin language does not lend itself to simplifying words as well as the Vorin language family.[9] There is at least one written form of language, the warrior's script.[10]

This article is still missing information. Please help The Coppermind by expanding it.
Retrieved from "https://coppermind.net/wiki/Shinovar?&oldid=155116"
Categories: