“I find myself in awe of your ingenuity, and your stupidity, both at once. ”

Wyndle is a cultivationspren on Roshar. He has a Nahel bond with Lift, making her an Edgedancer.[2] He is a Splinter of Cultivation.[3][4]

“I’ll not have you hitting people with me. ”

—Wyndle to Lift on Shardblades[5]

Wyndle is a cultivationspren who takes the form of a vine with clear crystalline structures growing off it. He doesn't move but instead grows towards his objective. The vines harden after a few moments of sitting, as if briefly becoming solid crystal, then they crumble to dust.[6] He can form a sort of face by curling vines around one another. He is invisible and inaudible to all but Lift, although the hordelings of the Dysian Aimian Arclo seem to be able to sense him.[7] He can make himself visible to others, though has a harder time doing so than other spren. However, the dust that appears after his vines disintegrate is occasionally visible to all.[6]

Once Lift states the Third Ideal of the Edgedancers, he gains the ability to form a Shardweapon. He has so far taken the appearance of a metal rod[8] and a Shardfork.[9]

Wyndle is a gardener who enjoys a quiet life. He is very proud of his accomplishments growing chairs.[2] He is quite proper and intelligent. He is a cautious and nervous spren who often worries about Lift's strange behavior and her potential malnutrition.

Wyndle does not like being used to hurt people.[10]

In the Cognitive Realm, Wyndle is a proficient gardener of chairs,[2] which has made him somewhat famous.[11] His Physical Realm form is, like other Nahel spren, capable of exerting a small amount of force in the Physical. Uniquely, Lift is capable of interacting with him in the Physical Realm, despite him not having enough substance there for such a thing to be possible under typical circumstances. Wyndle posits that this is because she is partially in the Cognitive Realm. She uses this ability to do things such as climb walls by having him form a ladder for her.[6]

Wyndle's bond with Lift gives him sentience in the Physical Realm and grants Lift the Surges of Abrasion and Progression.[5] This bond is strengthened as Lift swears additional ideals. For example, once Lift has sworn the Third Ideal of the Edgedancers, he gains the ability to become a physical, shape-shifting Shardblade.[8] 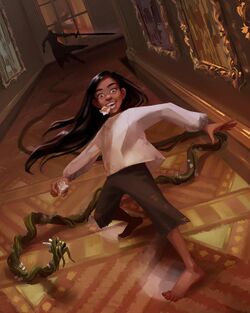 by Jessica Liu
Runing from Nale with Lift

Wyndle was a gardener. He collected souls of chairs and grew them into crystals.[2]}

He was asked by the Ring to bond with Lift, a decision Wyndle doesn't seem to like or understand.[2]

On the night that the Azish were choosing a new Prime Aqasix, Lift, Wyndle, and a gang of thieves went to rob the palace. Lift used Wyndle to climb walls and spy for her. He also taught her to use the Surge of Progression to grow plants in order to pop open a window. Despite having taught her to use Growth, he didn't think her ready to learn Regrowth. Just as Lift was about to succeed in the robbery, Nale, whom Lift called Darkness, came for her. Wyndle coached her through an escape attempt, but Lift was soon recaptured. Gawx was captured by one of Nale's Skybreakers as leverage against her. The Skybreaker killed Gawx, angering Nale. Wyndle helped Lift to escape a second time, but she doubled back to save Gawx. Wyndle told her about her power of Regrowth, although he was doubtful she could pull it off. When Lift got back to him, she swore her Second Oath and healed Gawx. The Azish believed that Gawx had performed the miracle of Regrowth, and, talking this as a sign from the Kadasixes, made him Prime. He quickly pardoned Lift and Nale was forced to let her go.[6]

Wyndle seemed to be happy at the Palace while they were guests of honor of the new Prime Aqasix, Gawx. Regardless, he followed Lift to Yeddaw, without understanding her plans. As they went, he figured out they were following Nale, who Lift called Darkness.[2]

by Ben McSweeney
Travelling to Yeddaw

Upon their arrival, Lift uses Wyndle to climb into places and spy on people. She created a diversion and later followed the guard capitan who surely would have made a report on her. As expected Nale arrived and Wyndle finds out from Lift that his plan is to kill Radiants.[1]

They trail him through the city until, as they are passing through a market, a thief steals a basket of fruit and runs off in Nale's direction. He captures the thief and, when she swings a knife at him, he kills her with his Shardblade. Lift tries to save her, but Wyndle explains that a Shardblade kills faster than Lift's powers can bring her back. Lift continues to follow Nale, using Wyndle to climb and spy until they find his quarters, where Lift eats Nale's pancakes.[12]

Wyndle helps Lift get into the Grand Indicium, where she wanted him to read everything to find "weird" events. He explained there wasn't enough time, so she went to steal some fancy clothes.[13] He took the form of a word she copied and showed to the scribes of the place, who then wrote to Gawx and received his request to treat Lift with respect and do as she asked.[14]Though she was unable to find anything useful, she does find one of Nale's allies and follows them. Wyndle himself offers to spy on them and finds out they are about to go and perform the execution.[15]

When Lift confronts Nale, she spoke the words of her Third Ideal and transformed Wyndle into a Shardweapon, a silvery rod, that was enough to block a strike from Nale's Honorblade. She used the opening to talk to him and convinced him that the Desolation has returned.[8]

After that, they returned to Azir to prepare for what was coming next.[9] Lift became a “person of trust” to the Prime, who listened and trusted her advice.[16]

Wyndle and Lift went to Urithiru to join with Dalinar.

Though the Azish she came with left before the battle of Thaylen Field, she stayed to help. Their task from Dalinar was to take the King's Drop from one of the shetel-im, a Fused using the Surge of Abrasion. Wyndle was tasked with following the Fused, who moved faster than Lift. He performed this successfully, but Lift was hit by a thunderclast. Wyndle suggested that she summon him as a Shardblade to protect her. Lift summoned him as a rod but was saved by Szeth.[10] Though Lift didn’t use Wyndle to obtain the ruby, they completed the task and gave the ruby to Dalinar, which was key to their victory.[17]

Wyndle and Lift stayed at Urithiru to help the coalition during the year succeeding the engagement in Thaylen Field. Around a dozen or so additional Edgedancers were bonded during this time, and along with Lift and Wyndle, they went to various battlefields to help heal people.[18] Lift volunteered for an envoy to the honorspren stronghold of Lasting Integrity, but Dalinar denied her request.[11]

Just before the Fused invasion of Urithiru, Wyndle accompanied Lift as she "stole" a basket of fruit from Gift. He prodded her, and she admitted both that Gift is leaving the food out for her and that her gift was from Cultivation and not the Nightwatcher. Shortly after, they both begin to feel the effects of the suppression fabrial being turned on the Radiants. They headed outside and witnessed Gereh's and Mraize's Aviar battling in the sky. Wyndle helped Lift climb a wall, but was unable to form a Shardrod for her. Regardless, Lift was able to rescue Gereh's Aviar.[19] Shortly afterward, the pair were found by Mraize,[19] who put them in a cage and sold them to the Fused.[20] Wyndle left to try to find help, but he did not return until the tower was restored.[21][22]

“I wanted to pick a distinguished Iriali matron. A grandmother, an accomplished gardener. But no, the Ring said we should choose you. ”

—Wyndle to Lift on bonding her[6]

It is clear that Wyndle did not choose to bond with Lift but feels obligated to because of the Ring's decision. He is somewhat frustrated by her unwillingness to learn, however, he does care about her, as evidenced by his worry that she will become malnourished.[6]

Lift at first believe that he is a captured Voidbringer and calls him that. She tends to ignore him and ask him to shut up.[2]

He tries to help her progress the bond by encouraging her to say the Immortal Words, as he considers that his duty. At first, Lift appears to ignore him.[23] However, once Wyndle begins to understand Lift more by realizing the hidden meaning in her words, their relationship improves,[24] and eventually she does swear the Third Ideal.[8]

Lift eventually acknowledges that he is not a Voidbringer.[9]

This article is still missing information. Please help The Coppermind by expanding it.
Retrieved from "https://coppermind.net/wiki/Wyndle?&oldid=161181"
Categories: