“They pick their rider, son. We fixate on Shards, but any man -- courageous or coward -- can bond a Blade. Not so here, on this ground. Only the worthy win here . . . ”

Ryshadium are a subspecies or breed of horse on Roshar. They are genetically distinct from other horses, though they are still capable of mating with them.[2] They are likely descended from horses that were brought to Roshar when humans first arrived.[3] They are often referred to as "the third Shard" in addition to a Shardblade and Shardplate.[4] 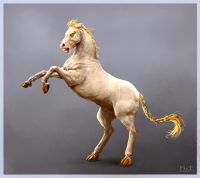 Ryshadium are larger than other breeds of horse -- for example, Gallant is two hands taller than an ordinary mount.[5] They can have various coat colors, including black and white.[5][6] Additionally, they can have both light or dark eyes, which have rectangular pupils.[4][1] Unlike ordinary horses, Ryshadium have stone hooves and thus do not require shoes.[4] This is likely an adaptation they have developed for life on Roshar. It is unknown if the hooves are actually stone, or a stone-like material.

In Shadesmar, Ryshadium leave behind a faint glowing afterimage.[7]

Ryshadium live wild in herds across Roshar, though they rarely stray into the western part of the continent. It is only after one chooses to bond a human that they allow themselves to be taken out of the wild.[8]

Ryshadium have a symbiotic bond with spren.[9] This is a variant of the Nahel bond that turns humans into Surgebinders.[10] The specific type of spren that bonds with them is unclear, although it could be musicspren as they have been seen around the Ryshadium even when there is no music playing.[8] The Ryshadium becomes significantly more intelligent—nearly sapient—and somewhat more resilient, while the spren is pulled into the Physical Realm.[11][12][13] Ryshadium and humans are among the few non-native species on Roshar to have developed a spren bond.[14] They go to the Beyond upon dying.[15]

The spren bond makes them more intelligent than any normal animal.[12] Their intelligence and understanding can be seen in their relationships with their riders. Human riders will often carry on conversations with Ryshadium and the horses will seemingly answer, either through body language or sounds such as snorts.[16][4][17]

In turn, humans take great care not to upset them. They cannot be ridden unless they choose a rider first,[4] and even then they remain difficult to train.[18] A Ryshadium will not be stabled with regular horses, but rather on its own pasture, large enough to run around in.[4] Common grooms typically don't know how to care for a Ryshadium, and once back in its pasture, the horse is sometimes left to fend for itself.[19] 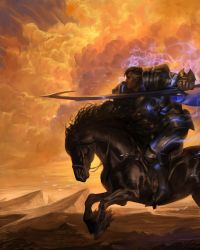 Ryshadium are known for choosing and obeying only a particular rider.[5] They are not broken or trained; they choose of their own volition.[20] A person must be "worthy" to be chosen by a Ryshadium. What the measure of worthiness is, however, remains unclear.[1] Only a dozen men in all the warcamps at the Shattered Plains had a Ryshadium[5] and for much of his life Dalinar was not worthy.[21] Dalinar describes the experience of having a Ryshadium accept him as a rider as "indescribable".[16]

Though Ryshadium choose their rider, they may allow others to ride them as they are needed; in one instance, Ryshadium were used to carry three wounded men from the battlefield.[22] On the rare occasions that a Ryshadium needs to carry someone other than their rider, the rider may have to spend a long time convincing the horse to do so.[23] Adolin regrets not appreciating Sureblood enough prior to his death in the battle at Stormseat; he spends time watching and grooming Gallant.[4][7] They form a friendship, and Gallant—perhaps missing Dalinar's companionship—eventually allows Adolin to ride him.[24][25] A Ryshadium having two riders is described as "very rare".[20]

Ryshadium are ideal warhorses. They can carry a Shardbearer in full Plate, demonstrating their enhanced strength and endurance. They are also faster than other horse breeds.[6][26] They are strong enough to withstand a Shardbearer jumping into their saddle without any injury to themselves, an action that would break the backs of most ordinary horses.[6][8] In battle, Ryshadium will hold their ground even in circumstances when other horses would flee, either through training or their natural abilities.[6]

While Ryshadium are useful in battle, Shardbearers will sometimes fight unmounted so that they do not endanger their Ryshadium in close attacks.[26][22] Ryshadium are loyal to their riders, and will risk their lives to find and aid them.[22]

This article is still missing information. Please help The Coppermind by expanding it.
Retrieved from "https://coppermind.net/wiki/Ryshadium?&oldid=168855"
Categories: