“There had been a ... bond between him and Sureblood. More delicate and indefinable than the bond between man and sword, but still there. ” 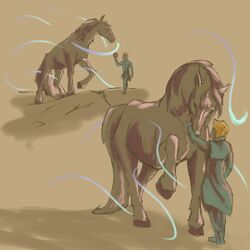 Sureblood is a white Ryshadium stallion[4] with dark colored eyes;[1] Shallan notes that he is actually a pure white color, not a dusty grey.[5] He is quite tall and will tower over a gelding.[6] He isn't as powerfully built as Gallant, who is much bulkier and squatter than Sureblood.[7] Unlike Gallant, he does not make mirthful clicking noises with his mouth.[8]

Sureblood is not prone to panic, remaining calm under archery fire even when warhorses would not,[3] and hardly needs handling by grooms.[4] Sureblood and his master share a close bond. He is very aware of Adolin's emotions and will often prance while Adolin is riding him in an attempt to improve his rider's mood;[9] Adolin feels like he is aware of Sureblood's emotions as well.[2] Simply being near Sureblood is enough to make Adolin feel better,[9] and during Sureblood's life, Adolin has felt morose to be riding a horse other than Sureblood.[7]

Adolin was more nervous on the day he met Sureblood than on the day he won his Shardblade because Ryshadium choose their own rider. He was young when they bonded; his exact age is not known.[1] Sureblood and Adolin had a close bond already by 1173, when they were living in the warcamps on the Shattered Plains and King Elhokar wanted to go on a chasmfiend hunt. When the chasmfiend unexpectedly appeared on their plateau, Adolin ran for Sureblood and rode him into the conflict, cutting into the creature's legs as he rode by.[3] Adolin also rode Sureblood out to skirmishes with the Parshendi on the Shattered Plains as the Alethi attempted to win gemhearts, although he typically led the charge on foot so he could leap the chasms.[4] 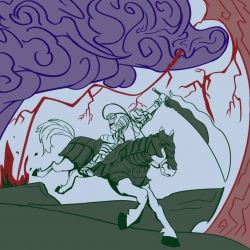 by EccoS
At the Battle of Narak

Sureblood carried Adolin to the Battle of the Tower, where Torol Sadeas abandoned the Kholin army to die.[10] Although the close-quartered fighting wasn't conducive to mounted attacks, Sureblood served usefully as a ride for a few of the wounded until Bridge Four gave them an avenue of retreat;[11] on the way back to the warcamps, he carried Adolin once more.[12]

Adolin continued to ride Sureblood, though he had less opportunity to ride or to groom the Ryshadium in the stable in the evenings as he was wont to do the more Dalinar focused on uniting the highprinces instead of riding out to capture gemhearts.[9][2] He took Sureblood out to a skirmish that only Roion and Ruthar were scheduled to go on in order to lend Jakamav, the only other Shardbearer, a hand. When Adolin left his conversation with Jakamav stewing, Sureblood attempted to ease his mood.[9]

Sureblood also took Adolin on the expedition to Narak despite Shallan's envy over Adolin having the taller mount.[6][5] As the fighting commenced, Sureblood was unsettled by the song the Parshendi were singing to summon the Everstorm. He charged into battle with Adolin, but a flash of red lightning struck him, killing him and flinging Adolin off of his back. When Adolin came across Sureblood's body, he screamed in grief.[1]

Adolin, realizing he had taken Sureblood for granted toward the end of his life, began visiting Gallant in the stables.[2] This budding relationship in the wake of Sureblood's demise eventually led to Gallant's loyal help in Shadesmar on the trip to Lasting Integrity.[13]

This page is probably complete!
This page contains most of the knowledge we have on the subject at this time.
It has yet to be reviewed.
Retrieved from "https://coppermind.net/wiki/Sureblood?&oldid=160250"
Categories: